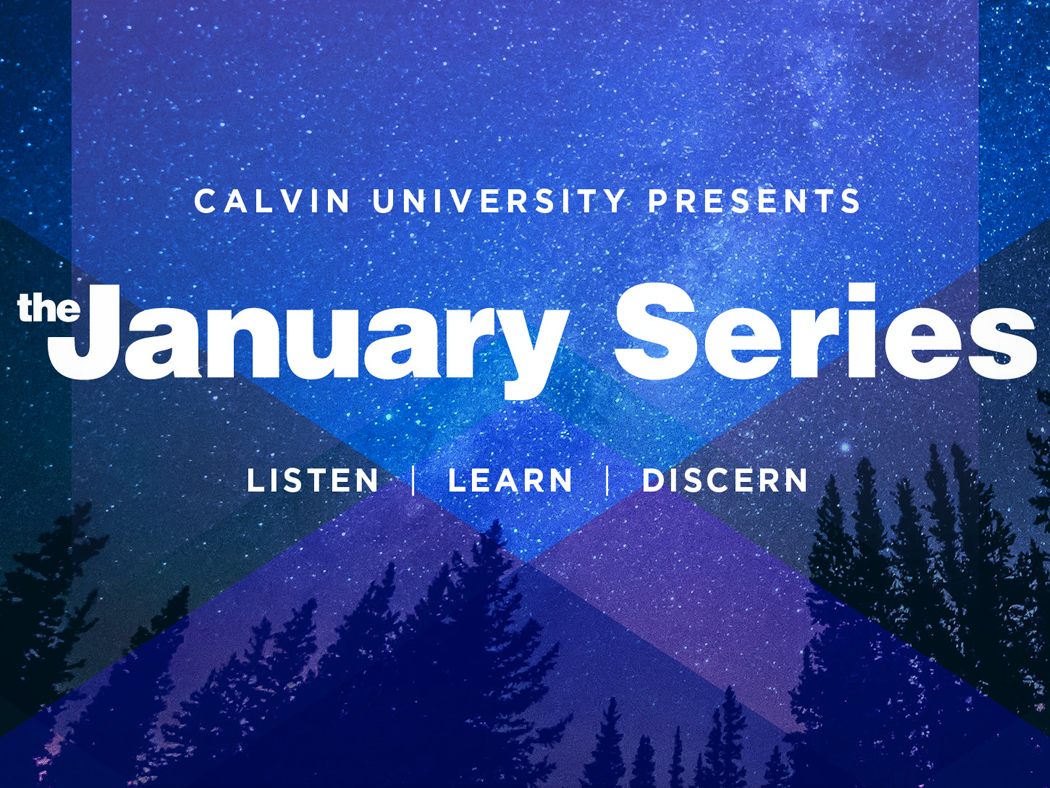 In early February 2020, Kristi Potter was taking a deep breath.

That’s usually the time of year when Potter, director of the January Series at Calvin University, is wrapping up details, putting the previous month’s lecture series to rest, and getting some well-deserved rest herself.

Before long, though, the next few weeks were anything but restful.

In early March, as she began her research and planning for the 2021 world-class lineup of speakers, “Everything froze,” said Potter. “I only had two or three invites out when the [COVID-19] pandemic hit, and we [Calvin employees] were sent home. Everything seemed to stop.”

“The whole speaker world stopped. Agents didn’t know what was going on, so everyone paused. Everyone was trying to figure out what next week or month would look like, certainly not knowing what [next] January would look like,” said Potter.

The January Series is an award-winning lecture series that draws in more than 70,000 attendees each year. For 15 weekdays each January, about 800 attendees would pack the Covenant Fine Arts Center Auditorium on campus to listen to a world-renowned speaker. And thousands more would gather at 60-plus remote sites across North America to watch the series live. Many others would listen online.

The uncertainty in early 2020, though, seemed to put the series, considered as a free, three-week liberal arts education, in jeopardy for 2021.

Potter wondered, “Would speakers be able to travel to Calvin? Would we be able to gather an audience? Even if we could gather in person, would it be socially responsible to do so? Could we do it all virtually? And would that open up access to speakers who might otherwise turn us down?”

It wasn’t long before Potter received abundant confidence through both Calvin University and long-time supporters of the series.

“From the beginning of the pandemic, leaders at Calvin were saying, ‘We have to figure this out,’” said Potter, “and because of the fact that really dedicated underwriters support the January Series and were already recommitting during this time for the 2021 series, we knew we had the financial support to carry on.”

It was now just a matter of figuring out what the next January Series would look like.

So Potter continued her homework, which typically involves a lot of reading, listening, and watching speakers—all things that she was now doing from her home. In most years she would attend multiple conferences around the country to check out speakers in person. But the pandemic and the limitations it placed on in-person gatherings and travel meant she had to attend conferences online — and ironically that opened up more opportunities. Potter was able to virtually attend more conferences at a much lower cost (some free), making access to speakers easier than ever.

So she watched a lot. And read a lot. And throughout the spring and summer, amid the pandemic, Potter started seeing themes emerge: economic uncertainty, racial tensions, the breakdown of meaningful dialogue, and more.

“I was able to focus on figuring out how we work through these conversations and how we can look forward to seeing the future beyond the pandemic. Where are our hopes, and where do we want to be moving forward?” asked Potter.

These and other key questions informed her decision making on speakers to invite to present at the 2021 January Series.

The result? A lineup as impressive and relevant as any other in the series’ history. The roster features multiple New York Times best-selling authors, two of Time magazine’s 100 Most Influential Leaders, and the 2020 winner of the Kluge Humanities Prize—considered the equivalent of the Nobel Peace Prize for the humanities.

A few of the world-renowned speakers on the 2021 docket include Tara Westover, author of Educated, a book that stayed on the New York Times best-seller list for a couple of years; Jemar Tisby, author of The Color of Compromise: The Truth about the American Church’s Complicity in Racism, which received the 2019 honors for Book of the Year from the Englewood Review of Books; Bruce Feiler, author of six consecutive New York Times bestsellers, the presenter of two primetime series on PBS, and the inspiration for the drama series Council of Dads on NBC.

The presenters will look ahead to the future of the Supreme Court, democracy, artificial intelligence, climate change, global trade, and civil discourse. They will also explore many other topics.

Potter says the series aligns with the mission of the university that offers it each year. While the speakers will dig deeply into their areas of expertise, their talks are about not just helping attendees gain understanding around an issue, but also helping them learn how that understanding can inspire action.

“We need to invest ourselves in these topics and pay attention. Every one of us needs to do our part to make the world a better place; a kinder, more inspiring world that fixes its problems,” said Potter. “I want people to be smarter about what’s going on so that they can speak into these areas and make our country and our world a better place. These conversations we have in January catalyze this work.”

This year, due to the realities of COVID-19, the January Series will have a completely virtual audience. Attendees will be able to watch the 15 daily noontime presentations on their own personal devices, in their own locations, or in small gatherings at remote sites available across the continent. Details on how to register for the presentations and where to find local remote sites will be available later this fall on the January Series website.

“We value our audience and are working to make it as easy as possible for anyone to join from where they are, whether at home, church, in an office, on a couch, or at a kitchen table,” Potter said. “These conversations are so important, and we think that by providing easy access to these timely and important conversations, we will reach a record number of people in 2021.”