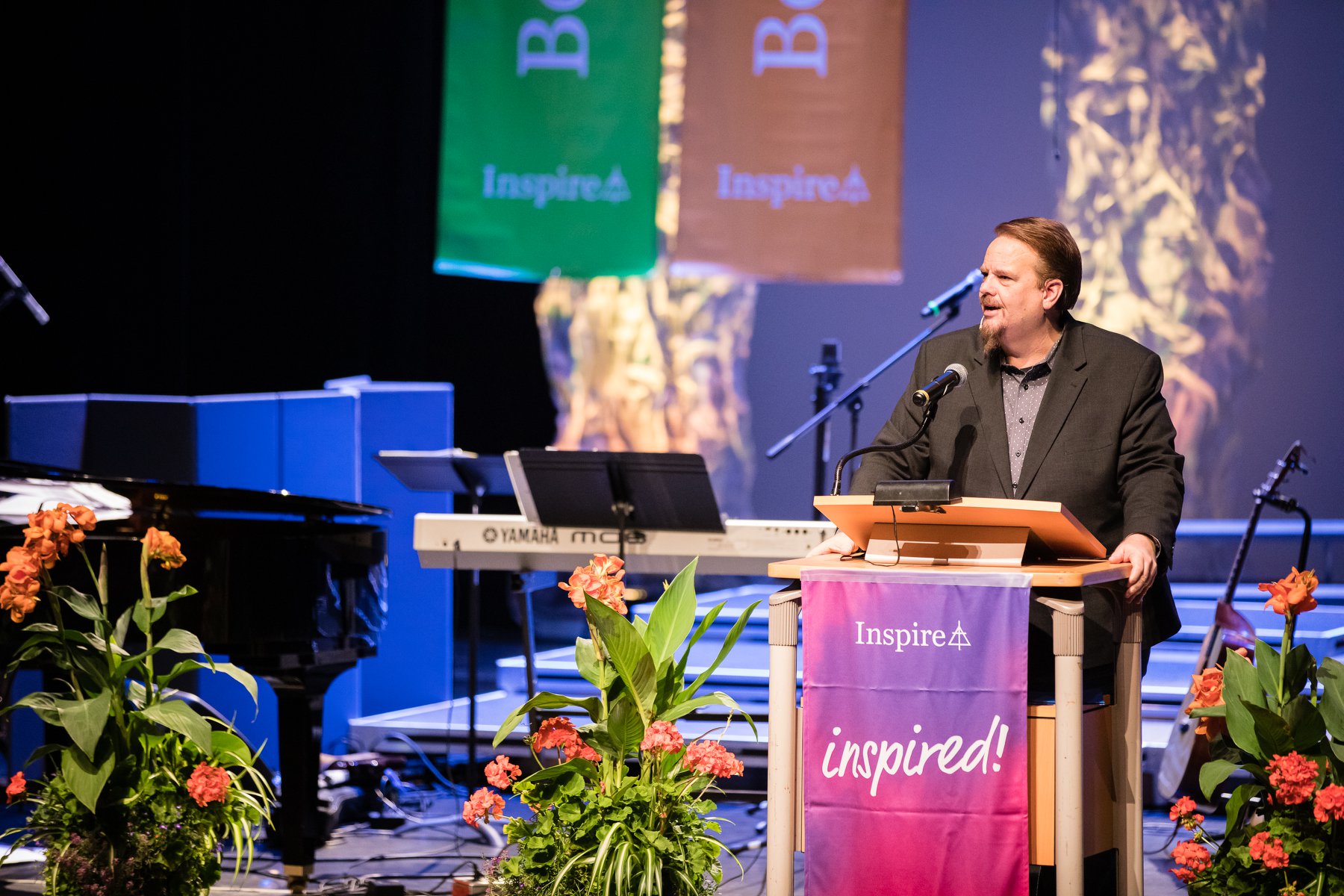 The day before he spoke at Inspire 2019, church planting expert and evangelist Ed Stetzer lost his glasses, making it difficult for him to see people sitting in the auditorium at the St. Clair College Centre for the Arts in Windsor, Ont., during the morning plenary session Friday, Aug. 2.

Jokingly, he squinted into the dim, spacious room and used the loss of his glasses to talk about the need to constantly adjust our eyesight to refocus on how we see the culture around us and how we live out our Christian faith within it.

“We need to see the world rightly with new lenses that are connected to a new life. We need to be wearing gospel lenses that need frequent adjustment,” said Stetzer at the Christian Reformed Church in North America’s second binational gathering that took place Aug. 1-3.

The rise of social media and the increasing reliance on turning to only certain sources for information have helped to fragment culture, causing it to rush to embrace whatever is new or trending. In the process, the new becomes better and change is held up as ever-important.

“Remember, Christianity is not about turning over a new leaf,” said Stetzer; “it is about a new life.”

Before Stetzer spoke on the theme for this plenary, “Be Changed,” Gail De Young, one of the worship leaders of the Inspire 2019 praise team, reminded church leaders and others that at this event they were celebrating several core values during plenary sessions: “Belong,” “Be Changed,” “Be a Servant,” “Be a Bridge,” and “Be His.” All of these weave together to help bolster our faith life and commitment to ministry in our congregations back home, she said.

Stetzer, who holds the Billy Graham Chair of Church, Mission, and Evangelism at Wheaton College and serves as executive director of the Billy Graham Center, used a range of images and stories to flesh out his topic based on 2 Corinthians 5.

He touched on various verses in the biblical text, highlighting a few such as these: “He has committed to us the message of reconciliation. We are therefore Christ’s ambassadors, as though God were making his appeal through us” (5:19-20).

Today’s fragmented world with its blurry distinctions and blind spots, said Stetzer, “is deeply in need to hear the gospel of reconciliation. As Christians, we are sent on a mission of reconciliation. When we miss that, we miss what Jesus wants us to do.”

Keeping to the topic of  his glasses, Stetzer spoke of a man who sent him a message spelling out the number of times he counted Stetzer adjusting his glasses while preaching one morning at Moody Church in Chicago, where he serves as interim pastor.

When he reviewed the video, Stetzer agreed that the number of glasses adjustments was high. Besides feeling a little embarrassed, Stetzer said, he reflected on this, and he sought a way to keep his glasses fastened tighter as he preached.

But he also thought of how important it is to keep our eyes focused on the shifts and cross-currents in culture, he said, and how we must regularly adjust our perspective to keep sharing God’s message of reconciliation in different ways.

“Because we live in such tumultuous times as followers of Jesus, we must continually renew our focus on how we can best be the representatives of Jesus in a broken world,” he said.

Jane, the Uber driver who took Stetzer and his wife to an airport in Chicago for a flight to Florida in early 2018, is one of those people who is subtly living out her faith and doing it with a fresh perspective, he said.

When they climbed into the back of Jane’s vehicle, Stetzer and his wife, Donna, noticed a little container next to them containing candy, some other items, and a copy of the Bible.

Stetzer eyed his wife, and they shared a smile. As someone who makes a living teaching evangelism, he wondered how this would go. And he didn’t jump in right away to reveal who he was, he said.

At first, they chatted, getting to know one another, said Stetzer. Jane asked them questions, which they answered, in some cases holding back from giving all the details.

As they rode and got closer to the airport on that frigid day, they wondered if Jane was going to hit them hard with a question about their faith. That didn’t really happen, he said, though Stetzer and his wife knew the conversation was moving in a spiritual direction. So he finally told her they were Christians. They all shared a smile, and then Stetzer asked Jane if he could interview her about her faith.

He was so impressed by her soft but sincere approach, he said; here was a woman who had her glasses on properly.

“She did it so right. She wanted to get to know us. She wanted, even in that Uber ride, to build a relationship,” said Stetzer.

During her interview with Stetzer, recounted in Christianity Today, Jane told him that she often found ways, if only superficially, to share her faith.

In one of his questions, Stetzer asked: “Have you had an opportunity to actually go a little deeper with someone about what it means to be a Christian?”

Jane told him about a guy who got into her vehicle a week earlier and started talking about his girlfriend, who was experiencing a crisis, and he told her about it. Once Jane understood what the situation was, the rider asked: "Hey, what do you think I should do?"

Jane answered: "Well, do you go to church?"

So Jane responded, "Well, what about praying?"

Even though he wasn’t up for it himself, he agreed to have Jane pray for him, which she did.

“By the time I dropped him off,” Jane told Stetzer, “he thanked me and said, ‘This ride was meant to be. You were meant to be my Uber driver,’ and he gave me a $22 tip. It was awesome.”

It turned out that soon after the Stetzers arrived in Florida, word came that Billy Graham had died. It was Feb. 21, 2018. Given his own connection to the Billy Graham Center and his role as a leading evangelical voice, many media reporters wanted to speak to Stetzer at the time of the funeral.

One of the reporters, who worked for the New York Times, asked Stetzer to give his assessment of the defining role Graham played for many years in shaping the direction of Christianity around the world. So he did that, Stetzer said.

“Then the reporter asked me who I thought the next Billy Graham will be — and so I told the story of Jane,” he said.

The reporter listened and took some notes, but at the end told Stetzer that anecdote wouldn’t make it into the Times. And he was necessarily surprised, he said.

Even so, Jane and many others like her have much to teach us about finding different ways to share the message of Christ in our everyday circumstances so that others can hear it — just like Billy Graham did for decades, Stetzer explained.

And that is what Stetzer asked participants at Inspire 2019 to do.

“Everyone says they love evangelism as long as someone else does it,” he said. “But as citizens of the kingdom who are leaders . . . we can’t lead with what we don’t live.

“If there is to be a vibrant future for the CRC, you must be able to show and share the love of Christ to the world — and to do it with a new perspective.”