Inspire: The Necessity of Lament 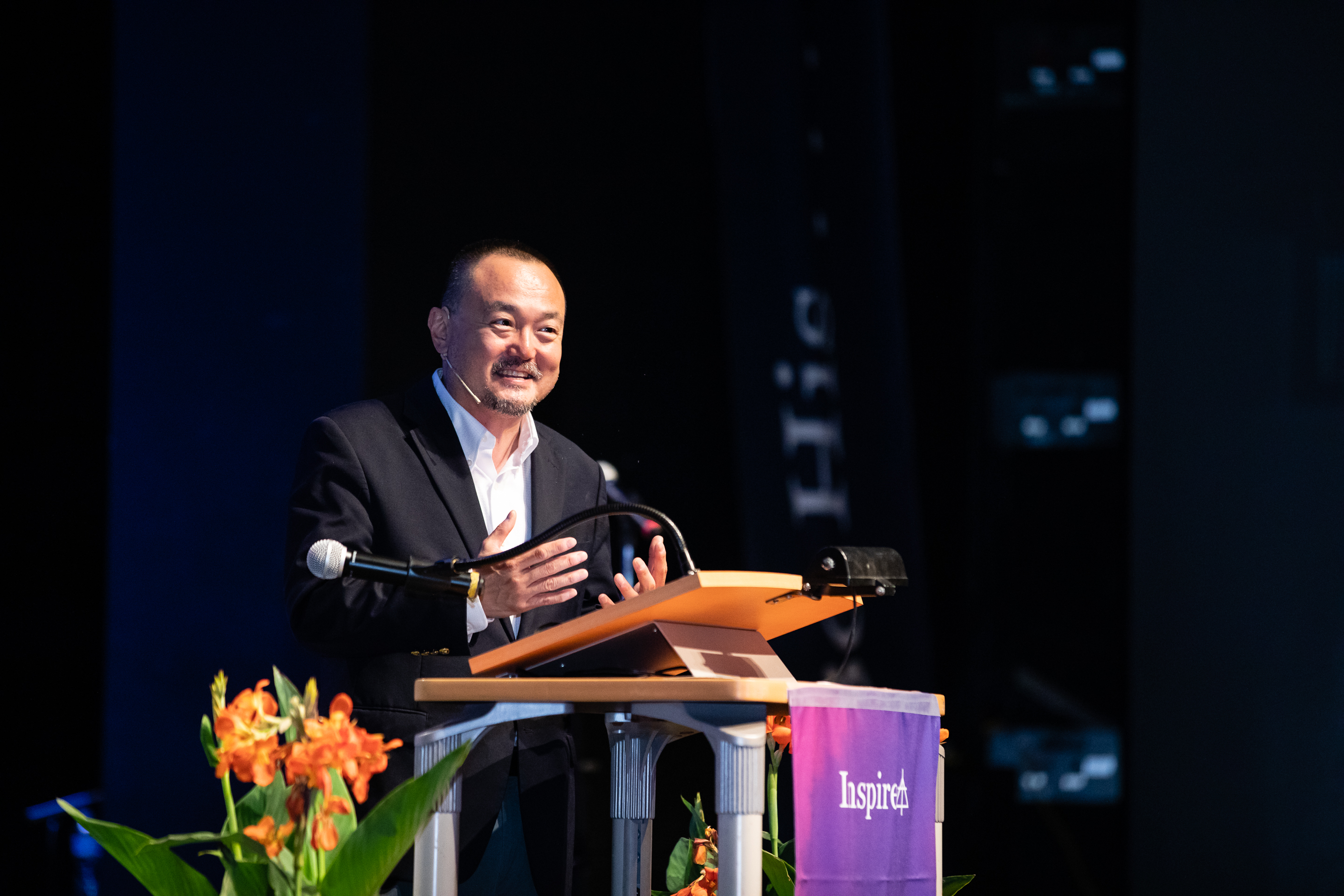 When Dr. Soong-Chan Rah turned 50 years old recently, he promised himself that this would be the decade in which he got fit. He began to research various fitness options and, along the way, learned some lessons that can benefit the local church – lessons about lament.

“As I began to reflect on the idea of muscle confusion, and that sometimes discomfort and disruption of routine and status quo can actually be a way toward physical health, I began to reflect that this also might be true for our spiritual lives and our church lives,” the professor of church growth and evangelism at North Park Theological Seminary, Chicago, Ill., told attendees at Inspire 2019.

In other words, Rah said, we need some dis-ease in our lives in order to create the desire to move us forward. This is why it is so important for the church not to lose the practice of lament. Yet all too often we skip over this spiritual discipline.

Rah shared a few bits of research with Inspire attendees to demonstrate this point. For example, he said that when he speaks to groups, he often polls them and finds that only about 1 percent of his listeners have ever heard a sermon series on the book of Lamentations. Similarly, when researchers surveyed churches from liturgical traditions that provide guides recommending which Scriptures to read or which songs to sing each Sunday, the researchers discovered that many churches regularly skip over any passages and songs of lament.

In addition, said Rah, while about 40 percent of the Psalms are psalms of lament, only about 15 percent of songs in traditional hymnals are songs of lament. And if you look at the top 100 worship songs according to Christian Copyright Licensing International, only 5-10 percent of those songs could be classified as ones of lament.

Rah explained that expressions of lament in the Bible follow a few different literary genres. Most of the book of Lamentations, for example, is written in a funeral dirge style. The word choices and even the meter and cadence of the phrasing are meant to convey grief.

“This is a reflection of how one feels when your life has been crushed, when you live under the oppression of an unjust world, when a loved one has died,” said Rah.

Using the phrasing and cadence of a funeral dirge in our worship life allows us to express those emotions, feel the dis-ease of them, and begin to move forward, he explained.

Unfortunately, the opposite is also true. When we talk about issues such as poverty, race, and injustice but we do not allow for the emotional feelings of lament, we end up allowing the status quo to continue.

Rah likened this to the experience of being a pastor in both a hospital room and a funeral home. The way that you minister to people in the hospital often includes the possibility that the sick person will get better, he said, but the same is not true at a funeral.

Rah explained, “At a funeral, there is a dead body in the room. You’ve got to deal with the dead body.”

You wouldn’t go to a funeral and encourage people to lay hands on the dead body and pray that the person would get better. That wouldn’t be appropriate. In the same way, dealing with issues of injustice without the language of lament isn’t appropriate, he said.

“When it comes to things like injustice in our world – and racial injustice, I would argue, in particular – we think we are at a hospital when actually we are at a funeral,” he said. “There are many, many dead bodies in the room. And they happen to be dead bodies of mostly black men, black women, and native and first nations people.”

And those dead bodies are not just from this generation, said Rah, but from hundreds of years of North American history. We can’t act as though healing will take place just by saying a few nice words and holding hands.

Rah then spent some time discussing how the “dead bodies” in our history have come to be. He explained that racial injustice today has come about through a complex cycle of externalization, institutionalization, and internalization.

It is not just that individual people have expressed personal prejudices, but those prejudices have been voiced and externalized in such a way that they shape institutions. These institutions, in turn, take on a life and culture of their own, independent of the individuals who started them. In addition, those systems perpetuate narratives that will continue to fuel the system even if the structures of the system are taken down.

He used the history of race relations in the United States as an example. Because of the cycle of externalization, institutionalization, and internalization, even though the systems of slavery and Jim Crow laws have been toppled, the narrative that one people group is superior to another people group continues to influence American society and finds new ways to express itself.

Rah said that in today’s society this narrative of white supremacy has found a new expression in mass incarceration of black men and gerrymandering to suppress the black vote.

He also shared a personal story about his mother, a Korean immigrant who had to work two jobs to support her four children. She worked 20 hours a day, six days a week, and damaged her knees by kneeling for an hour or more a day for 50 years in prayer for her family.

However, because Rah’s family received food stamps, the narrative about his mother was that she was less worthy than other people in society. Even the U.S. president at the time referred to people like Rah’s mother as “welfare queens” who were sucking on the system.

Unless you get rid of the fuel of the narrative, Rah said, the faulty system will continue to find ways to rebuild itself.

Rah then asked Inspire attendees to consider whether the assumption of superiority of one people group might be influencing the structure and culture of our churches. Do we value one type of culture over others? he asked, for example. Do we think that certain songs, certain worship styles, or certain religious expressions are better than others? Do we make way for other cultures one day or one month of the year and then return to the way we are used to doing things?

If so, we need to find ways to change these underlying narratives, and we can’t do that by doing things the way they’ve always been done.

Instead, Rah asserted, we need to change the momentum and create new narratives.

“When the world is saying ‘This is the way we are going to do things, and this is the right way, and this is the only way,’ we need to respond with ‘Let’s enter into a place where we are under the heart, will, and suffering of God’ — and that is lament,” said Rah.

At the same time the writing style of the book of Jeremiah and Lamentations are very different. Rah said that the likely reason for this is that in Lamentations, Jeremiah recorded other people’s words. The prophet wrote down the stories of the people who were left behind – the widow, the orphan, the suffering, and the vulnerable.

“Here is the learned, privileged, educated, literate writer,” said Rah, “and he shuts up to let other voices rise up.”

“Lament is allowing other voices to rise up. Lament is hearing not just from the privileged and powerful but from the suffering and oppressed,” he said. And that begins to fill a hole in the narrative and shape it into something new.

Rah told Inspire attendees that it is the church’s job to challenge the narratives of society and to instead listen to the stories of the single mom, the immigrant, the people seen as welfare queens who are on their knees every day praying for their families. It is in listening to these stories that new narratives can be created, he said.