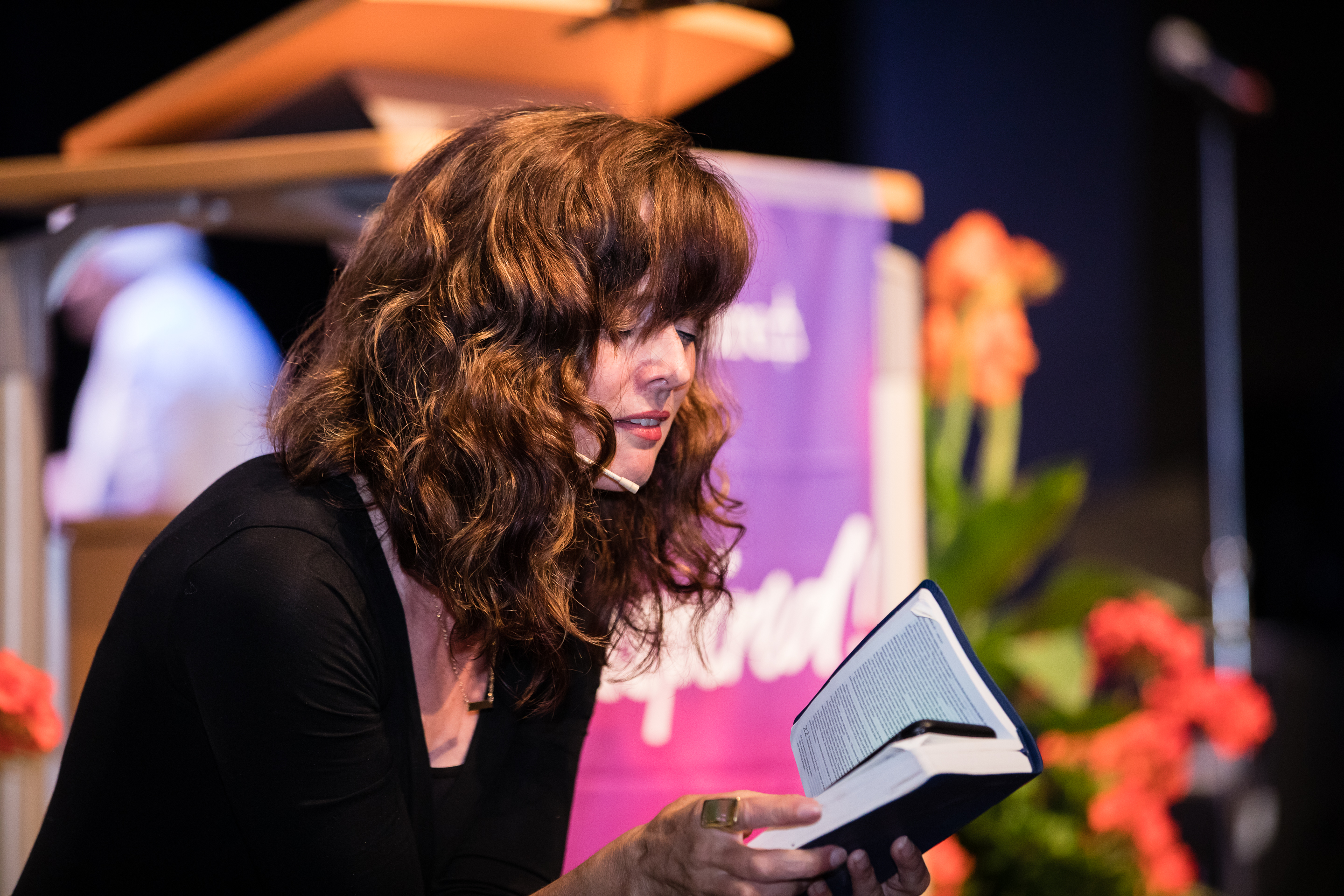 The kauri tree in New Zealand has lessons to teach the global church, author and speaker Ann Voskamp told attendees at Inspire 2019.

Voskamp, a best-selling author — was the third plenary speaker at Inspire and gave her address on Friday, Aug. 2 in the evening. The theme for the evening was “Be a Servant” – which followed previous plenaries themed as “Belong” and “Be Changed.” Voskamp’s address, titled “The Way of Abundance,” used the story of a kauri tree to illustrate her point.

The kauri tree is a pine tree found in northern New Zealand, and it can grow up to 168 feet tall. Some years ago, a kauri tree fell in a New Zealand forest and left behind a stump that was ignored for years.

“If a tree falls in the forest and no one actually abandons it, does it actually die?” asked Voskamp, posing a clever twist on a question often asked in philosophy classes.

In the case of this particular tree, said Voskamp, life continued. Years after the tree had fallen, an ecologist walked by and noticed what appeared to be sap dripping from the stump. On closer observation and research, the ecologist discovered that the tree was still alive, because “deep underneath the earth, the roots of the stump were wrapped around and connected, interlaced and linked to the roots of the forest trees around it,” said Voskamp.

This intricate system of grafted roots kept water and resources flowing to the stump. At the same time, the roots of the stump allowed other trees to reach farther to access water than they could do on their own.

“In mutual giving, there is abundant living,” Voskamp concluded about the forest trees.

She went on to say that such mutual giving and being grafted together is a part of our understanding of God as the Trinity.

“Since before the beginning of creation, the great dance of God the Father, God the Son, and God the Spirit – the triune God – was happening in intimate, connected, interlaced communion,” said Voskamp.

She explained the relationship of the Trinity as “an endless dance of abundant, overflowing love.” It has been a dance that created the world, brought us salvation, and continues to extend us grace.

“If we lose our trinitarian focus, we are left with an impotent witness. If the church does not fully focus on the Trinity, the church loses any hope, any power, and the source of all transformative ministry,” she said. “Why? Because God is love. For God to be love, God must be more than one.”

If life is God’s great dance of abundance, then, send Voskamp, the only way to be a great servant of God is to be part of that self-giving, overflowing dance of love. We must be willing to be similarly in relationship with others, to be servant-hearted, selfless, and willing to surrender our own desires for each other.

Voskamp went on to share a few examples from her own experiences. She and her family have helped to bring two refugee families to Canada in the past three years, one from Syria and one from the Congo. She has also visited an Iraqi refugee camp. Conversations with the people she has met in these situations have helped to shape her understanding of what the church should do, she said.

The young refugee mother from the Congo, for example, had witnessed her own mother being splayed by a machete and had had to flee for weeks on foot when she was only 15 years old. As this woman told her story to Voskamp, she wondered aloud, saying to Voskamp, “Why is my life supposed to be like this?”

“She felt like a stump in my arms,” said Voskamp. “A hollow shell of her former dreams. And as I wiped away her tears, and as our family and a community of believers, rooted and grafted in Christ, grafted her into our lives and shared our resources with her, the rhythm and movement of the great dance of the universe beat the truth. And the center of the universe is other-centeredness.”

Voskamp stated that at the center of the universe is the Trinity and that the Trinity calls us to put other people’s interests before our own. “The very shape of Christianity is hospitality,” she said. “And hospitality is not about entertainment; it is about making a trinitarian gospel statement.”

This hospitality, she said, is subversive because it goes against the notion that we should only offer our hospitality to those who make us feel comfortable. Instead, God calls us to extend hospitality to the outcasts, marginalized, and vulnerable of the world.

Voskamp also shared the story of Joseph, a 22-year-old Iraqi refugee whom she met in a refugee camp. Before ISIS came to Joseph’s hometown, Joseph went to church every Sunday. When Voskamp asked what he believed now, he told her that he no longer believed there was a God.

Similarly, she told a story of a young Syrian refugee who had been passed around and raped by multiple soldiers daily for several years. The woman cried out that she feels invisible to the world.

“When we only look out for our own interests, others lose interest in God,” said Voskamp. “When we only speak out about issues that concern us, the world doesn’t believe there is a God who is concerned about them.”

In fact, when we are more concerned with our own reality than with the reality of others, we are being narcissistic and a poor reflection of a God who is all about love, said Voskamp. Instead, we should be living a life of radical and abundant hospitality.

“Our theology is best expressed in our hospitality,” she said. “The abundant life is not about getting abundance but about giving abundantly.”

When we live life like the kauri tree, when we graft ourselves to each other to provide resources to people  who need them, we participate with the Trinity and are able to truly live a life of abundance.