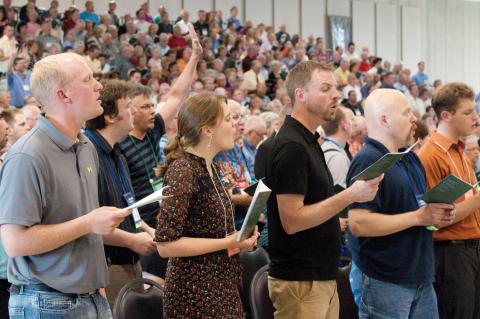 Joint worship and praise at Vermeer Center in June.

Members of All Nations Christian Reformed Church in Halifax, Nova Scotia have been pleased by the many ways they have been able to use the new hymnal Lift Up Your Hearts.

“Our congregation loves singing, loves learning new songs, and loves trying varying types of accompaniment. Lift Up Your Hearts gives us plenty of songs we love and plenty of lovely songs to learn,” say Rev. David Vroege, pastor of All Nations.

Another benefit of the hymnal, he says, is its all-inclusive quality, ranging from ancient songs to new songs of church, as well as the ways in which it addresses significant aspects of life through prayers embodied in music.

“The name of our congregation is ‘All Nations’ and this hymnal helps us express our diversity and be shaped by the diversity of parts of God's church less familiar to us,” says Vroege.

By this diversity, he says he means ethnic, cultural, musical and textual diversity.

“But I also mean the range of ancient and contemporary words, the variety of short songs and multi-stanza hymns, the pastoral sensitivity in songs for births and baptisms as well as songs for suffering and dying, the expressions of praise and lament and intercession, and so on.”

Lift Up Your Hearts: Psalms, Hymns, and Spiritual Songs is the result of many years of careful research, planning and collaboration, all of which have been paying off, says Rev. Joyce Borger, music and worship editor for Faith Alive Christian Resources.

Since it was published a year ago, the hymnal has sold nearly 36,000 copies in the various versions, to CRC, RCA, Presbyterian and other church bodies and schools.

“The response has far surpassed anything we dared hope or imagine,” says Borger.

“We have heard many positive reviews and it has been enthusiastically received.While many products struggle to make budget in three to five years, this hymnal should reach that point in about one and-a-half years.”

Lift Up Your Hearts is divided into two main sections. The first section reflects the story of redemption from creation to the new creation and includes Christ’s life and the Christian Year.

The second section follows the traditional order of worship featuring songs for the opening of worship through the concluding blessing.

While the hymnal comes in a variety of digital formats, it is the actual book with its pages and music that is intended to provide special value for the person in the pew.

Borger says the book carefully places a song in a larger body of songs, giving continuity and perspective to the person using the book.

“The naming of sections and the organization of the hymnal, what is found before and after a hymn, all those things have been thoughtfully done and are dripping with theological meaning serving as a teacher whether or not the hymnal user is fully aware of being taught,” says Borger.

“There is also something significant about being able to hand someone a body of songs from which the majority of their worship music comes from. You can take it home, reflect further on the texts, turn to the texts to express joy or sorrow in your own devotions, play and sing together in small groups and families.”

Lift Up Your Hearts brings together more than 850 hymns, psalms and songs as well as provides prayers, formats for worship, litanies and portions of Reformed confessions.

“I have been delighted to hear from pastors that they are including the Heidelberg Catechism more in worship as a responsive reading because they ‘stumble’ across the appropriate portions as they search the hymnals for songs,” says Borger.

“I have also been pleasantly surprised at how the hymnal is finding a home in so many diverse congregations.”

Last month, delegates to the CRC and RCA synods passed a joint resolution in which they agreed to work on healing long-time rifts and work together wherever possible as they move forward as churches.

They did that on a Saturday night in the fieldhouse on the campus of Central College in Pella, Iowa. The next night,  members of both denominations sang songs from the same hymn book in a combined worship service in the Vermeer Pavilion in Pella, Iowa.

Besides being used at the worship service and at other services during the synods, the new hymnal ​has been featured at the Calvin Symposium on Worship, ​adult education events, and webinars in the last 12 months.

“It was also showcased at last year's Hymn Society of the United States and Canada's annual conference,” says Borger.

Karen A. DeMol, emeritus professor of music at Dordt College in Sioux Center, Iowa, says she believes this hymnal “enables us to carry our strong Reformed heritage into new generations and to strengthen the vibrant practice of singing our faith, keeping us both rooted and fresh in our worship.”