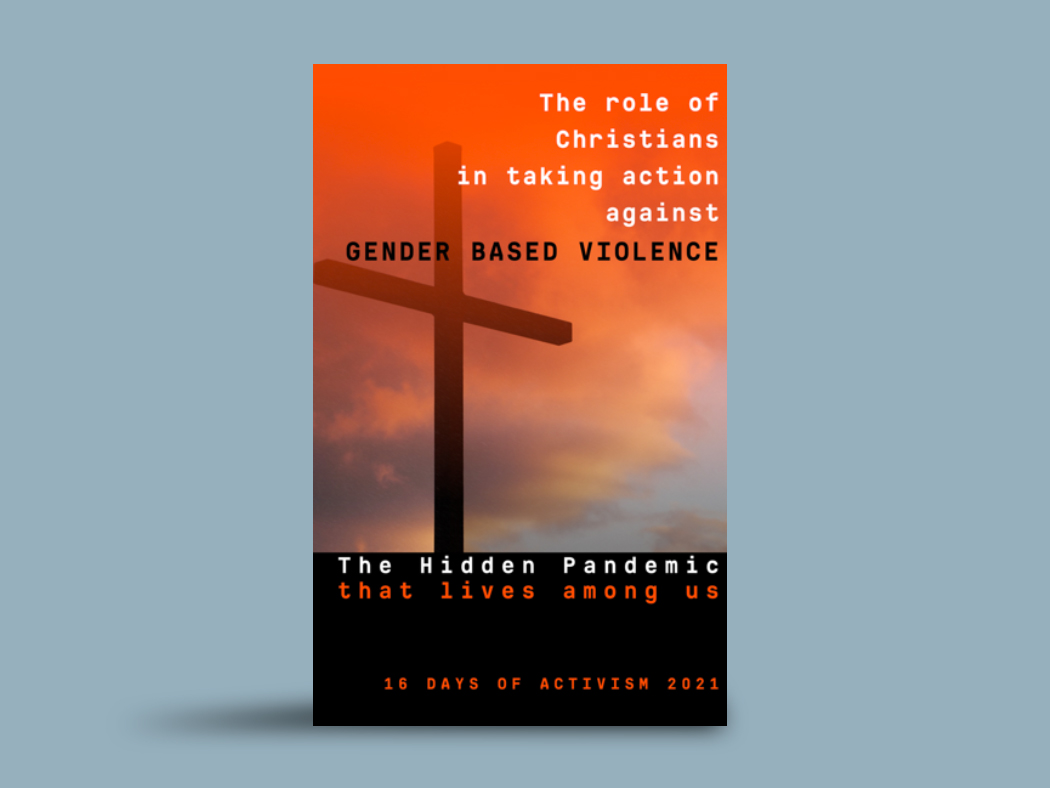 A young Ugandan mother is often subject to beatings by her husband, who drinks heavily. Even though a doctor warned her against having another child due to a medical complication, her husband forced her to have sex and made her pregnant anyway.

Unfortunately, this story of gender-based violence (GBV) is not unique. The experience of this young mother in a village in Uganda is similar to that of many other women and girls in North America and in every corner of the world.

“Now pregnant again, [the young mother in Uganda] wonders what would happen to her other children if she died during childbirth,” says a devotional reading in a new booklet, The Role of Christians in Taking Action against Gender-based Violence.

Included as part of a 16-day campaign sponsored by World Renew and Safe Church Ministry, the booklet is an advocacy guide that offers stories, reflections, and action steps for advocating on behalf of people who have experienced gender-based violence.

Titled “16 Days of Activism against Gender-Based Violence: The Hidden Pandemic,” the campaign, along with access to the advocacy guide, kicks off at 3 p.m. (EST) on Nov. 23, 2021. To register, click here.

The online gathering will include a 45-minute dialogue on how concerted efforts to address GBV can be strengthened by tapping into the influence of the church and other faith-based organizations.

The keynote speaker will be Dr. Elaine Storkey, a globally renowned author and theologian on gender and gender-based violence. She served as the president of Tearfund UK for 17 years, focusing on issues women face across the world.

Storkey has authored award-winning books, including Scars Across Humanity: Understanding and Overcoming Violence against Women. Also during the event, World Renew leaders and other international development workers will speak.

“We want to bring attention and awareness to an issue that has continued to grow greatly during the pandemic,” said Julian Muturia, a gender specialist for World Renew.

“This is not just a CRCNA campaign. We are joining an annual campaign spearheaded by the United Nations,” she said. “We are asking governments, agencies, and others to help reduce the number of people experiencing gender-based violence.”

According UN Women, “Faith-based and traditional actors are increasingly recognized as key actors in the prevention of violence against women and girls (VAWG). . . . Their reach and influence cannot be ignored, especially given their unique position in households and communities.”

According to the United Nations and the World Health Organization,

This is the second year in which CRCNA ministries are joining global efforts in shining a spotlight on gender-based violence.

“As Christians, we are moral duty bearers; we are trusted by communities and spend a lot of our time and resources addressing global issues and supporting those who are vulnerable. . . . Today, we are being called to shift our gaze and attention for a moment towards this hidden global pandemic: Gender-Based Violence,” according to the campaign’s concept paper.

“It is not only fracturing families and communities, . . . [but]  disrupting the education and future of many girls both in the developed world and the global South. It is creating an intergenerational web of shame, isolation, and trauma while limiting the economic opportunities of millions. . . .”

Joining World Renew and Safe Church in this campaign and adding to the dialogue are Resonate Global Mission and CRCNA executive director Colin Watson, Sr., as well as other leaders.

Through this collaboration, the church will continue to find creative ways to not only keep the discourse going but also contribute significantly to prevention and response to gender-based violence abroad, where we work, and here at home in North America.

“We are highlighting a huge issue that is happening around the world, and the CRC is not immune from it,” said Peter Bulthuis, World Renew’s Canadian director of church and community engagement. “We can’t be silent, and we must take action.”