Forging Ahead during COVID-19 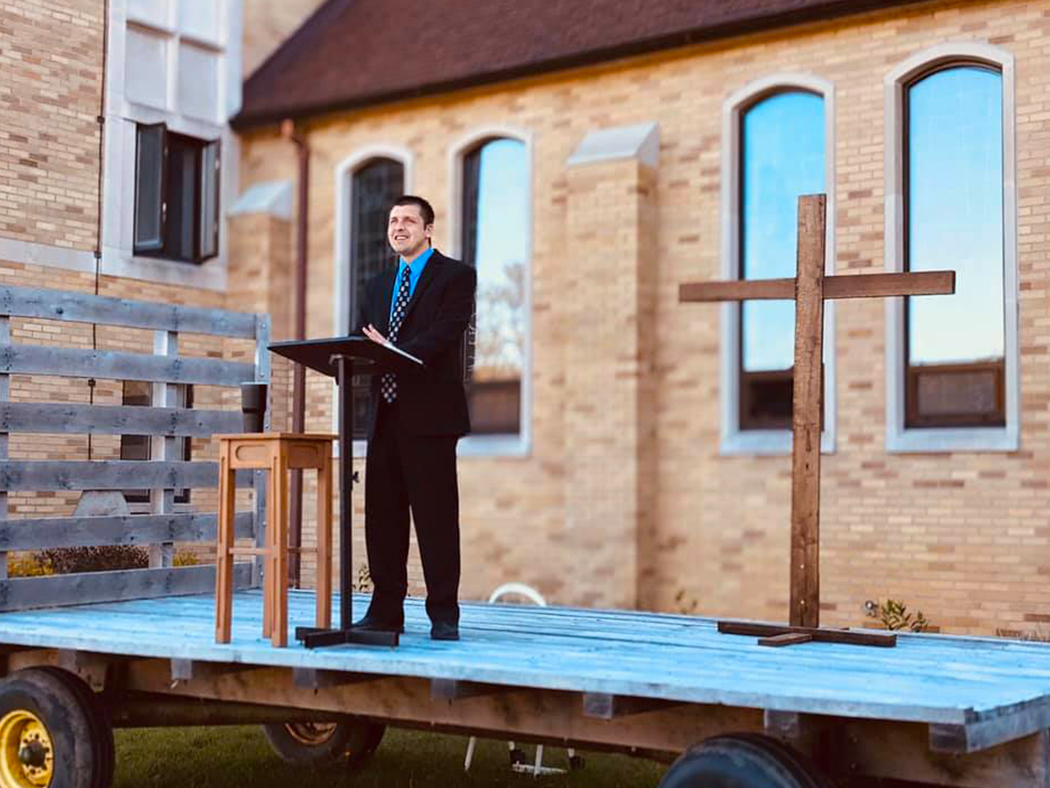 The regular elders meeting and the men’s Bible study took place, and the church participated in a large prayer service on Wednesday night. But before long, the COVID-19 pandemic began shutting down, at least for a while, businesses, schools, and other organizations, including congregations throughout the Christian Reformed Church in North America.

“By the end of the week, it all came apart. Those were the hardest days of my ministry so far,” said Lloyd Hemstreet, pastor of Coopersville CRC.

Although Coopersville decided to hold their worship service that first Sunday, they canceled Sunday school. And at the end of worship, Hemstreet dismissed people one row at a time to observe social distancing.

“But after that, we closed down,” added Hemstreet, who has served the church in Coopersville for nearly five years. “We went entirely online with a prerecorded sermon on YouTube.”

Faced with unprecedented challenges, this congregation has so far weathered the pandemic in ways that may vary from the approaches of other congregations throughout the past year. On this first anniversary week of the pandemic’s arrival in North America, CRC News will begin a series of stories on how various churches have fared over the past 12 months. (If your church is interested in participating, send an email to  CRC Communications.)

Preaching from a Hay Wagon

In those early weeks last March, said Hemstreet, Coopersville CRC kept the sanctuary closed. However, in a relatively short time, church leaders came up with the idea of wheeling into the parking lot a hay wagon on which Hemstreet could preach. They obtained an FM radio transmitter and began holding their Sunday service outside for members who came to listen on the radio from their parked cars.

Like a few other congregations in Classis Zeeland, said Hemstreet, “we became a drive-in church. Not many people came the first week.”

But his wife, Kristina, volunteered to put together a video for church members, giving them a good idea of what being a drive-in church — at least temporarily — could entail.

Soon, said Hemstreet, the numbers picked up, especially because members “realized it was good to see each other and wave at each other in their cars.”

Also, during this initial shutdown while all of the area’s schools were closed, Heemstreet and his wife prepared and presented a short “Proverbs with Pastor” devotional time Monday-Friday on YouTube for children in the church.

In addition, Coopersville CRC at that time joined with a number of other congregations in Classis Zeeland to hold a pair of online prayer services.

While some CRC congregations, a year into the pandemic, have yet to reopen for in-person worship, Coopersville CRC began to meet in the sanctuary again by the time summer arrived.

As best they have been able, said Hemstreet, they have taken the approach that church members can make their own decisions, to mask or not and to attend services in person or not.

“The fact that we have a large sanctuary and a fairly small membership has been a good thing,” said Hemstreet. “It hasn’t been hard for people to keep some distance from one another.”

As summer wore on, they figured out how best to livestream their services on Facebook. “It was crude, but it was something,” said the pastor.

In October, they were able to hold an event celebrating their congregation’s 100th anniversary. A photo from that celebration shows members spaced apart and sitting in pews from the front all the way to the back of the sanctuary. Many church members are dairy farmers or work in nearby manufacturing plants.

The anniversary was a time of sharing memories and fellowship, of offering support to one another with assurances and hopes that the congregation would endure for another century.

But they had to shut down again as fall arrived and COVID-19 infections began to rise — especially in the Coopersville area. “The virus started to spread for the first time in our community. Some of the people in our church came down with COVID-19,” said Hemstreet.

Because of the virus’s spread and to follow the guidelines of the state of Michigan, they had to shut down again on Nov. 15, he said.

“That was emotionally hard,” said Hemstreet. “Here we had been struggling through. Now I was back talking into a camera.”

By the third week of Advent, Coopersville CRC reopened for people wishing to attend worship, and they were able to hold a Christmas program featuring children from the Sunday school.

By January they were back to regular worship with about 100 people in attendance. However, another brief shutdown came in February, when Hemstreet was exposed to COVID-19, tested positive, and had to be quarantined.

“I had mild symptoms — a little cough, a runny nose — but I did lose my sense of taste and smell,” said Hemstreet.

Although several church members have had COVID-19 as well, only one member — a 96-year-old woman in a nursing-care facility— passed away as a result of the disease. “This reminded us of how serious it is for some people,” said the pastor.

Throughout the see-saw nature of the past year, managing how to deal with the pandemic has been a topic church leaders have had to regularly discuss and make decisions about.

For the most part, the congregation in Coopersville has forged ahead, keeping the church open as much as they can, even though a small percentage of people have preferred to stay home.

“We have gone through this together,” said the pastor. “We have decided that, as God’s people, we want to assemble together. There has been a great deal of prayer, and we have left this in God’s hands as we go forward.”