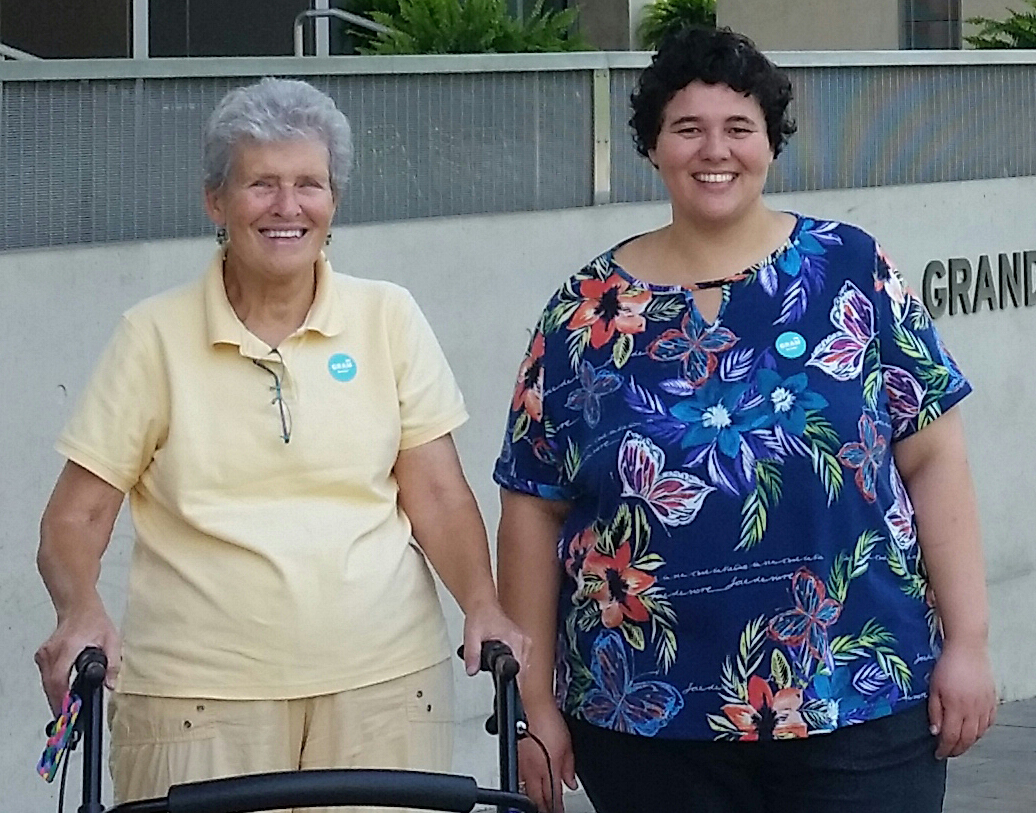 Synod 2017 encouraged congregations to commemorate a Day of Justice each year in whatever ways they saw fit. They suggested holding this event on the third Sunday in August, because it aligns with World Humanitarian Day, an occasion that calls “for global solidarity with the more than 130 million people around the world who need humanitarian assistance to survive.”

Preaching to members of Eastern Avenue Christian Reformed Church in Grand Rapids, Mich., on Aug. 19, Rev. Janine Williams, a pastor in the Uniting Reformed Church in Southern Africa, helped the congregation mark this important day and understand the meaning of global solidarity.

She said that the evils of apartheid in South Africa became abundantly clear to her one day in 1989. She was only six years old at the time and was at home when her father had a serious stroke. Although her mother ushered her into another room, Williams could still hear her father struggling for breath as he tried to call the hospital.

“He was certainly dying, and my older brother got on the phone and and spoke to the doctor, who said he could help and asked for our address,” she said.

At the time, they lived in Knysna, a South African community of about 65,000 people on the country’s southern coast. This was also during the time when apartheid, racial separation, was written into South Africa’s constitution.

When the doctor heard their address, he paused and asked, “Are you coloured?” (referring to having a mixture of white and black ancestry).

They told him yes, and the doctor quickly responded, “There is no way I can go there.”

The doctor was white and refused to work with people of black or mixed ancestry. Williams’s father died without being treated.

Williams’s sermon was part of a liturgy created by the worship team of Eastern Avenue CRC to mark the Day of Justice. It included songs, prayers, and times of reflection formed around justice, hope, and reconciliation centered in Christ, topics that Williams focused on by speaking from her own experience.

“After my father died, I was full of bitterness and anger until I was 13. I realized I wanted to do something to that doctor so that he knew how much he hurt us,” said Williams.

“But when I told my mother this, she responded by saying, ‘We are children of God saved by our Lord Jesus Christ. That doctor can also be saved by Jesus Christ.’”

It was a moment that would shape Williams’s life for the future.

Williams came to be the guest preacher at Eastern Avenue CRC on this special day because of her studies. She was a fellow at the H. Henry Meeter Center at Calvin College and was staying with members of Eastern Ave. CRC in August.

Since she is a pastor in the Uniting Reformed Church, Williams was asked to preach on Aug. 19 as a way for Eastern Ave. to celebrate the Day of Justice. The congregation also wanted to explore the Belhar Confession, written by the Dutch Reformed Mission Church (DRMC) in 1986 as a document that expresses the heart of the gospel and makes clear that God opposes such examples of racism as apartheid.

In the Day of Justice liturgy at Eastern Ave., worship planners included an excerpt from the Belhar stating, “The church must . . . stand by people in any form of suffering and need, which implies, among other things, that the church must witness against and strive against any form of injustice, so that justice may roll down like waters, and righteousness like an ever-flowing stream. . . .”

Rev. Thea Leunk, pastor of Eastern Ave. CRC, said the congregation was grateful to have had the chance to hear someone so closely connected to the church in South Africa and the Belhar preach on the Day of Justice.

“She gave a very powerful and moving testimony of growing up ‘coloured’ in South Africa,” said Leunk. “At Eastern Avenue, we are very committed in our ministries and programs to helping bring about justice. Her sermon broadened that for us by speaking of what justice is like in a different cultural setting and made the Belhar more clear to us.”

John Apol and his wife, Judy, hosted Williams while she was staying in Grand Rapids. Commenting on her sermon, John said, “Her illustration from her family's personal experience with apartheid was very thought provoking.”

In addition, he said, her words gave the Belhar more meaning to him because it was written “in the same geographical area that Janine's congregation is found.”

In her semon, Williams explained that the doctor whom she resented, the doctor who her mother said was also one of God’s children, eventually was transformed by the Lord and began treating people of all racial backgrounds.

But even after speaking to her mother that day when she was 13, said Williams, she struggled with depression until later in her teens, when she “understood what it means to belong to God. The Lord came and saved that doctor, and the Lord that saved prisoners saved another prisoner — me!”

As she came closer to God, she said, the anger and bitterness that had been keeping her trapped went away, and she knew that the Lord who comes to save the oppressed, to break down racial barriers, to lift the poor and offer hospitality to outcasts; the Lord who began his ministry by announcing that he had come to save the world — this is the Lord who “is here for all of us, every day. He comes for you; he comes for me.”

Working to bring justice into all areas of the world is important, said Williams, because this is what God wants and what the world needs. But even more important is accepting the grace of God and the saving power of Jesus.

“Jesus was anointed, and he anoints us to preach the Word every day of our lives. This is simple. The day of the Lord has already come,” she preached.

God gives us comfort, she added, and “we are lifted from our own fear because he will be with us for all eternity.”

Did your congregation participate in the annual Day of Justice? CRC Communications would like to hear about what you did and how it went. Please email [email protected] to let us know.