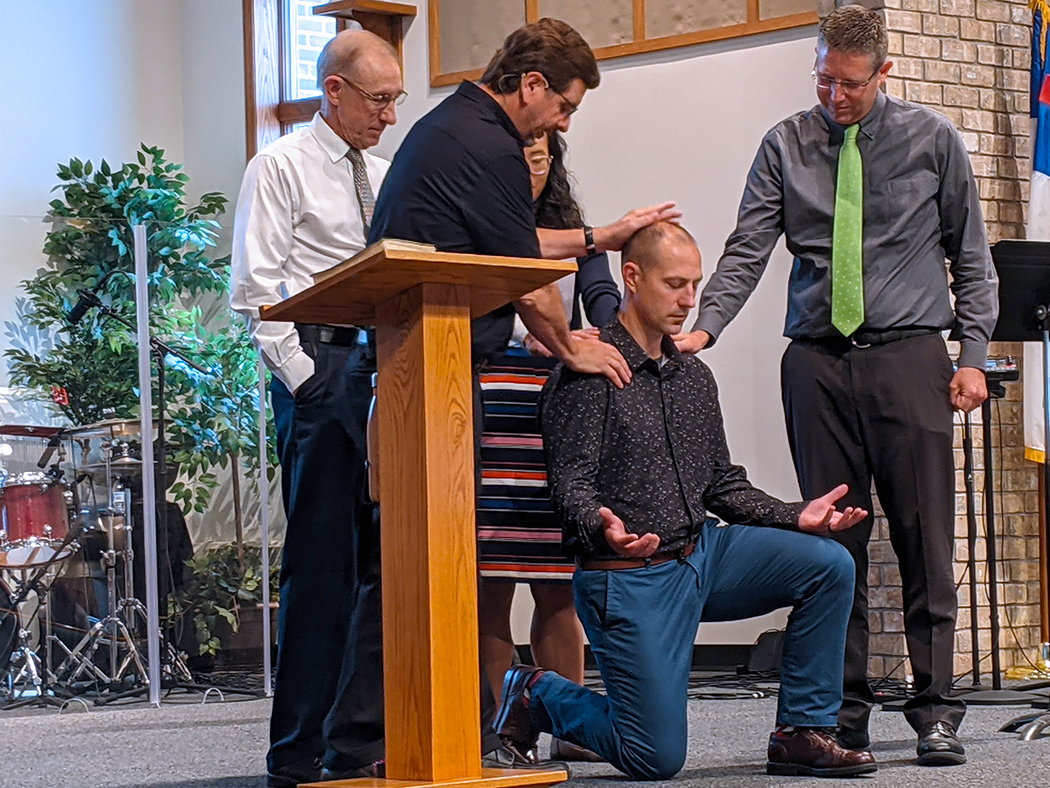 Recently ordained at Lake City Christian Reformed Church to serve as a chaplain in the Michigan National Guard, Tim Kimbel was driving through farm country outside Port Austin, Mich., this week and reflecting on the bumpy course he has taken into a career in ministry.

Driving along, he was on the job as an operations manager and vice president for a dairy farm supply business.

But this fall, Kimbel said, he will receive his commission as a captain in the National Guard and will be sent to work as needed with soldiers and staff at the 107th Engineer Battalion based in Ishpeming, Mich.

“It has been one step after another. Things fell into place with God’s hand leading me forward,” Kimbel said in a phone interview.

But that didn’t mean it was easy or that he took a straight road into chaplaincy.

A 20-year veteran of the military and a recent graduate of Calvin Theological Seminary, Kimbel said: “I had to evaluate where God was leading. I wanted God to make it clear that being a chaplain is what he wanted me to do.”

Rev. Sarah Roelofs, a ministry consultant for the CRC’s Chaplaincy and Care Ministry who took part in Kimbel’s ordination ceremony, believes members of the CRC can learn from Kimbel’s path into chaplaincy.

Increasingly, those studying to be chaplains have had different career paths.

“We think his story is important for the church to hear, as his ministry journey has diverted from the traditional into the extraordinary,” she said.

“I believe we'll see and hear of more folks like him who continue to follow God's call in the midst of unique circumstances and obstacles.”

Kimbel’s spiritual pilgrimage dates back to his youth, when he attended a nondenominational church where, he said, he encountered spiritual abuse that led him to leave that church and to start attending Lake City CRC, which opened its arms to him and showed him love.

It took time, however, for Kimbel to set aside the teachings of the nondenominational church and to become comfortable with Reformed theology. But he studied diligently, and by the time he married his wife, Jamie, in 2004, he had come to know and embrace Reformed theology.

“As part of the CRC, my spiritual heritage and theology stem from the period of the Protestant Reformation of the 16th century, especially drawing from the writings of John Calvin,” he said.

“The core theological understanding in this tradition is that God made the world good, sin corrupted the created order, and the cosmos has been suffering the consequences of evil since that time.”

Now the father of eight children, Kimbel first joined the U.S. Army not long after the terrorist attacks on Sept. 11, 2001. And although he has been in military service ever since then, for several years chaplaincy was not on his mind.

He served two tours in Iraq — the first time arriving in the country in April 2003. In that deployment he worked for a military transport company, in part helping to provide security for convoys traveling across Iraq.

Serving as a staff sergeant, Kimbel was deployed to Iraq again in 2008, helping to train and oversee Iraqi corrections officers and then working with interpreters.

He was more involved with the people on this second deployment, he said: “I was able to learn the culture and had the chance to hand out Bibles in Arabic.”

At that time, he added, he could sense a change in the way he viewed himself and his aspirations. He knew God was calling him to something else.

“I had a lot of Sundays off and went to different styles of worship [overseen by military chaplains]. I attended a full gospel service,” he said. “I went to the Lutheran services and went with Catholic friends to mass.”

Returning home, he finished his undergraduate degree, majoring in history and minoring in political science, religion, and Middle Eastern studies at Central Michigan University. He also completed Officer Candidate School. For a time, Kimbel served as an ordinance officer, but that wasn’t satisfying, he said.

Then, as he put it, he asked, “Where do you want me, God? . . . I wanted to make a difference beyond just going to drill weekends.”

Dealing with these issues, Kimbel said he spoke with his pastor, Mical Pugh, and also turned to Rev. Ron Klimp, a friend he met when Klimp was serving at Prosper CRC in Falmouth, Mich. Later Klimp became director of the CRC’s Chaplaincy and Care Ministry.

When they talked about Kimbel’s future, he said, Klimp invited him to attend a chaplaincy conference in the summer of 2015. “After the conference, I was affirmed in my spirit that this was the place for me,” said Kimbel.

Moving forward, he said, he had the chance “to rub shoulders with” military chaplaincy leaders such as Chaplain (COL) Herm Keizer, who served as a chaplain in Vietnam, was wounded twice and, after serving for many years and retiring as director of the CRC Chaplaincy office, passed away in 2017. Kimbel also met Chaplain (MAJ) Peter Hoffman, who served as a chaplain in Iraq in 2007.

Kimbel said he saw them as solid leaders who understood “Army soldiers” and were “willing to dive into the work of connecting with those whom they serve. I felt an immediate connection to these men and continued to draw on lessons learned.”

Through them, Kimbel said, he also learned of the way military leaders viewed chaplains of the CRC.

“It became apparent that chaplains trained in the Reformed tradition are highly sought after by military leaders. The CRC has a reputation of producing highly competent chaplains. . . . The standard of excellence is attractive to me, and I hope to carry on the tradition.”

Kimbel’s two decades of experiences in the military, plus his training at Calvin Seminary, he added, have prepared him to address the unique challenges that military chaplains face in sharing the love of Christ with soldiers and their families.

“Military families face challenges that require special consideration such as deployment separation, formation transitions, frequent moves, intense demand, and many physical and mental health issues. God has given me a heart for this population,” said Kimbel.

Kimbel added that his work with farmers has also prepared him — at least to an extent — for chaplaincy. “I’m out here to get with key customers. We help farmers be more efficient and to be better farmers.”

Having hired many of the company’s employees, Kimbel said, he also seeks to serve them, given that many are Christians and members of his church in Lake City.

The road he has traveled has taught him many things, he said. Despite questions and concerns he has had at times, he has never given up, he said; he has moved forward, growing in faith.

Being in the military for so long, said Kimbel, has taught him to think first and consider his emotions afterward. And training to be a chaplain has opened him up to all spheres of life, including his feelings.

“I have landed at the position where I consider all of life as an opportunity for ministry and do not try to keep these spheres exclusive and separate. This has freed me to just be who I am without trying to guard a part of myself,” said Kimbel.