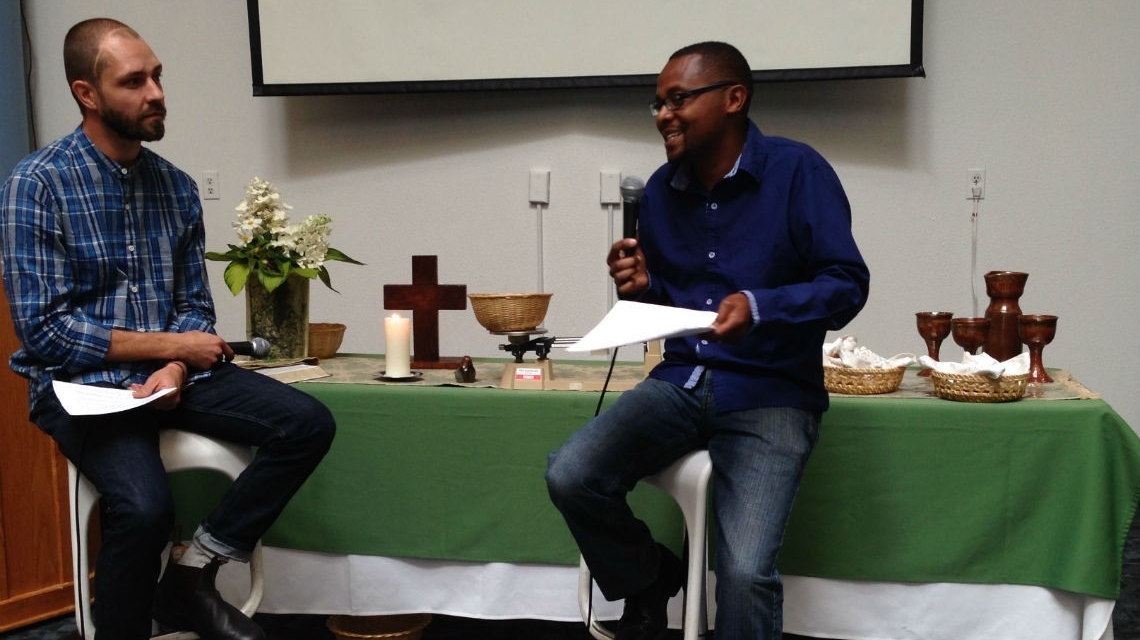 This story first appeared in the Sept. 10, 2018 issue of the Christian Courier
The Christian Reformed Church Synod 2017 designated Sunday, Aug. 19, 2018, as the denomination’s first Day of Justice for the denomination to serve as “a time to consider the meaning of biblical justice, to lament injustices, and to commit to the transforming work of standing alongside people whom society oppresses and pushes to the margins.”

The service opened with a meaningful liturgy adapted from the Iona Community by church member Wendy Stienstra entitled God of the Tipping Point.

On the communion table, beside a cross and a burning candle, sat a set of scales with a balancing basket and counter weights. Members of the congregation came forward to add stones and feathers to the basket – objects they had chosen as they entered the sanctuary. It was a sign of commitment and hope of one day reaching a tipping point in favour of the poor and oppressed of the world.

Melle Huizinga led the children’s message, announcing first that he had a special treat. He proceeded to give one candy to each child sitting at his left. To those on his right, he gave three. Instantly, a child with one candy rose to his feet to protest, “That’s not fair!” But it only took another few moments for a child with three candies to suggest that if each one with three gave one away, then everyone would have two candies.

“How much better a place the world would be if everyone acted liked this,” concluded Huizinga. Before they were dismissed, he asked the children if they had eaten breakfast before church. “Many children in the world,” he said, “did not have anything to eat this morning.”

The guts to dream

An interview with church member Dan Muthui about his journey to justice took the place of a sermon. Originally from Kenya, Muthui grew up in abject poverty and was displaced from his home due to tribal rivalry. Muthui became a student at The King’s University, where he earned a Micah Certificate and met Micah Centre founder, Roy Berkenbosch, with whom he traveled to Bangladesh in 2012. Muthui also sits on the Board of World Renew.

In designating a Day of Justice, Synod understood that different congregations across the denomination would have different instances of injustice in their communities. Muthui, who now works in Edmonton’s inner city with an agency called The Mustard Seed, drew the congregation’s focus to the injustices he sees there. This includes the gentrification of inner city neighbourhoods with displacement of residents and subsequent rising property values and taxes that are even driving out agencies that help the poor and homeless; and slum landlords and drug dealers who take advantage of the vulnerabilities of others to enrich themselves while subjecting them to further bondage and inhuman conditions.

Muthui has observed that although many of us give towards those in need, and even volunteer our time to serve them, we do it from a safe distance. We don’t want to get too involved.

Did your congregation participate in the annual Day of Justice? CRC Communications would like to hear about what you did and how it went. Please email [email protected] to let us know.