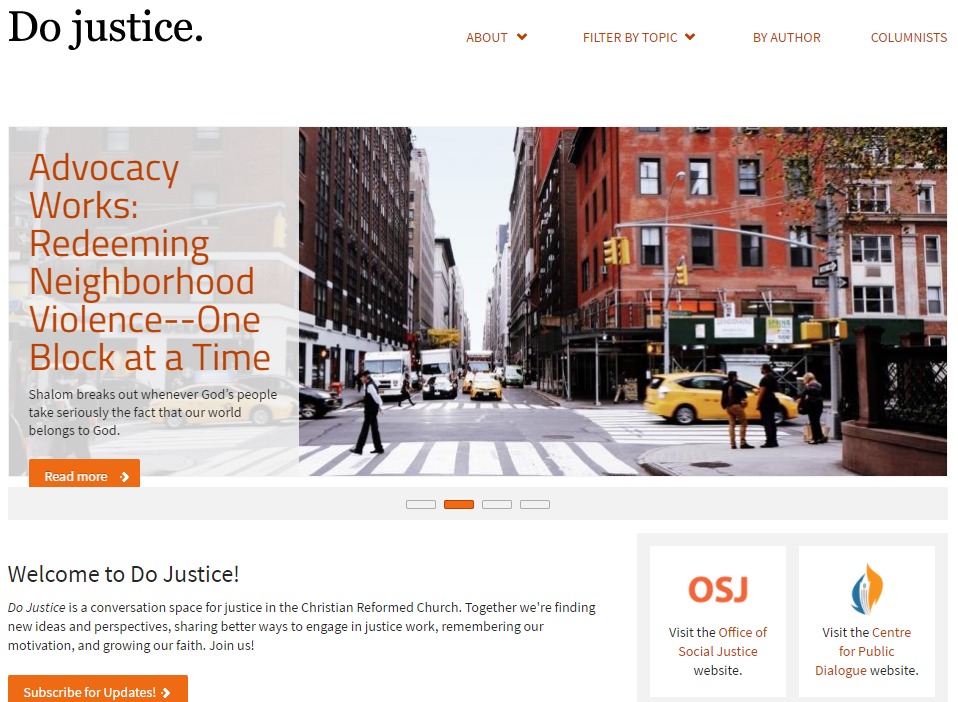 Screenshot of the Do Justice blog.

Looking at this year’s Agenda for Synod, you might not have picked an overture from Classis Minnkota as being the one that would most capture people’s interest. The overture, calling for more editorial oversight of a blog called Do Justice, dominated conversation for much of June 13.

The story behind the overture began with a missed email. Greg Talsma from Classis Minnkota was disturbed by what he read on the blog sponsored by the Christian Reformed Office of Social Justice and Centre for Public Dialogue.

Thinking he had received no response, Talsma brought his initial concerns to his local classis meeting. Classes are regional groupings of churches and serve as a conduit for individuals and churches to bring their concerns to synod. His classis, Minnkota, heard Talsma’s concerns and drafted the overture that would capture the interest of Synod 2017 delegates.

During synod, Taslma acknowledge his error in not seeing the email response. Classis Minnkota, however, did not choose to withdraw their overture. And advisory committee spent time considering the request and brought a recommendation to the floor of synod.

The discussion that followed over the editorial policy at Do Justice galvanized the Synod 2017 delegates like few other issues. The Minnkota complaint alleged that the blog had gone much too far to promote dialogue, saying, “Though intended for good, the focus on different points of view has gone much too far, including authors who promote praying to false gods, equate native religions to Christianity, participate in idolatry, and promote pluralism.”

The complaint was based in a number of articles in which the authors reported and explored participation in First Nations religious ceremonies, including a new moon ceremony and prayer in the name of the Great Spirit.

Suggesting violations of the second and perhaps first commandments, Minnkota asked synod “to establish oversight of the blog Do Justice to ensure that posted articles are in line with Scripture and our confessions.”

The discussion about this request was long, interrupted by procedural motions, by other business, and by breaks, but ended with deep passion and a decision that attempted to honor both the concerns of Classis Minnkota and the mission of Do Justice.

Two powerful voices punctuated the discussion. One was Bobby Boyd of Classis Red Mesa. Speaking to the specific blog posts that caused Tolsma’s concerns, Boyd in a quiet voice spoke of his experience as a Native American. “My understanding is that we did not [truly] know God until we heard the gospel,” he said.

He went on to state that when you put together the worship of the triune God with evil spirits you are syncretistic. We are Reformed, he added. “We stand on the Word of God.”

Jeannette Romkema of Classis Toronto was equally persuasive on the other side. She said that she had been a subscriber to and had written for Do Justice. She called it “a gift.” She mentioned her sons who were often skeptical of the church but for whom the Do Justice blog was a positive contribution.

In the blog, she added the church listened to First Nations people in a way that it had not listened before. She said that Do Justice was “one of the first spaces that we have welcomed dialogue” with people whose voice has been taken away.

Part of the discussion also had to do with the nature of internet forums like Do Justice. How are they different from older, paper-based ways of communicating.  Jessica Groen of Classis Illiana said that blogs like Do Justice should be seen as works “in process,” “a conversation,” not something settled and fixed like print. She said that we need to provide for “open and alive communication.” We should not “squelch the process.”

Synod took several non-controversial actions immediately. They commended the editors of Do Justice for actions they have already taken to tighten editorial policy. They recommended adding references to past decisions of the church, where appropriate. They asked that it be made clear that the articles on the blog did not necessarily represent the official position of the Christian Reformed Church. They also asked that Steve Timmermans arrange a follow up conversation between representatives from Classis Minnkota and the editors of Do Justice.

There was also general agreement that there should be oversight for the blog. The sticking point was the nature of this oversight. The motion before the synod asked, “That synod instruct those who have oversight of the Do Justice blog ensure that the articles are written in such a way that they encourage a Reformed understanding of Scripture.”

Some felt that this language was not strong enough. They proposed that articles posted to the blog should all conform to Scripture and the Reformed confessions. In other words, they felt that the blog should represent the established positions of the church.

Others disagreed with this proposal. They argued that the blog should continue to be a “conversation space,” open to a variety of points of view.

James Poelman, Classis Chatham, reporter for the synod committee which developed the synodical response, used the analogy of difference between discussion in the family and a conversation in a neighborhood.  He said that if you invite in your neighbors for a conversation, you do not tell them what to say. Do Justice, he said, was intended to be a neighborhood discussion, not a family discussion.

The chair of the synod committee, John Ooms of Classis Alberta North, invoking his own experience with staff, said that the staff already have a system in place and have made steps to ensure good oversight. It works best when you give people the freedom to do their job, he said.

Peter VanderMeulen, coordinator of the Office of Social Justice, was also given a chance to address synod. He explained the steps taken to review and revise material before anything is posted. He commended the writers and editors of Do Justice for the great work that they do. He also acknowledged that we are all learning and growing. Sometimes we make mistakes, he said, before adding that those mistakes are also learning opportunities.

The long discussion ended with a last speech by Bobby Boyd of Classis Red Mesa with a plea to “stay in the Scriptures” and “to make the right decision tonight.”

Given the length of time spent in debate over this issue, and given the variety of opinions expressed on the floor, Richard Smith from Classis Eastern Canada asked permission to pray before delegates cast their votes. He said a prayer asking for the Holy Spirit to help people discern God’s will in this matter. He also left a moment of silence for people to listen to the Holy Spirit’s leading.

Following this prayer, delegates cast their votes electronically. With that, the synod passed the motion as written. Those who have oversight of the Do Justice blog were asked to ensure that the articles are written in such a way that they encourage a Reformed understanding of Scripture.