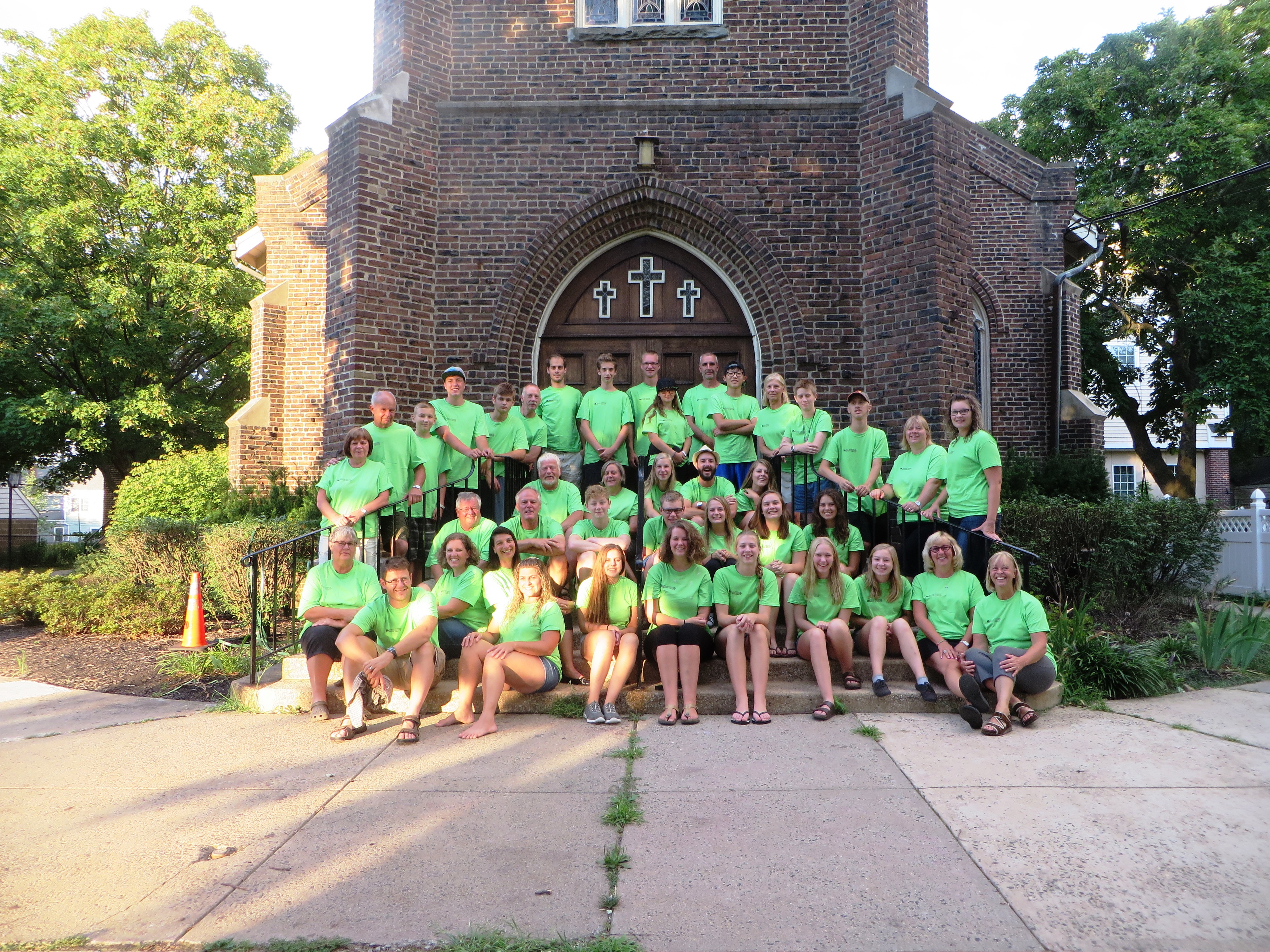 Members of the intergenerational mission trip

Joelle Wilhelm never had to know how to use a screw gun before—mainly because the need had never come up.

But this summer, the first-year university student from Community Christian Reformed Church in Kitchener, Ont., who was born without a left arm, used the tool to fasten screws into drywall as a way to help others.

Wilhelm was in Union Beach, N.J., as part of an intergenerational mission trip that her church took to help World Renew’s Disaster Response Services in its ongoing work following the devastation that occurred four years ago in the wake of Superstorm Sandy.

“I wasn’t sure how to use the screw gun,” said Wilhelm, who has a prosthetic arm. “But people on my team were patient and took the time to show me how to put the screws into the drywall.”

Team members also helped her to carry sheets of drywall into the home they were repairing, showing her how to do the work with the strength of her full arm.

“It was a great trip. It really brought us together as a church,” said Wilhelm.

Persons with such difficulties as asthma, Asperger’s syndrome, autism, and arthritis and others like Wilhelm with physical limitations went to New Jersey in late August to do restoration work. In all, 42 church members ranging in age from 9 to 70-something volunteered to be part of the intergenerational mission trip.

The group stayed at the Reformed Church of Highland Park, and every day they broke into groups of six to fan out and work at various locations, said John Medendorp, pastor of Community CRC.

“The teams did everything from hanging drywall to painting to insulation to yard cleanup. In the evenings we met together for devotions and prayer at the church,” said the pastor.

Hosting a trip that included volunteers with physical challenges and developmental disabilities was fairly unusual for World Renew, but it was worth the effort, said Art Opperwall, program manager for World Renew DRS.

“We recognize that there is great value in including people with disabilities whenever possible,” said Opperwall. “Clearly it's an experience that benefits the volunteer with a disability who is often excluded, but there's also benefit to the group and to the community in which the group serves.”

Pauline Mitchell, program coordinator for World Renew DRS, credits the church in Highland Park for helping to make the mission trip happen by working to identify and coordinate work sites where the volunteers who have challenges could use their skills.

“We certainly appreciate all that the church did in accommodating us in so many ways,” said Medendorp.

In the past, said the pastor, Community CRC sponsored a youth mission trip every year, but the church took the opportunity, after its youth minister left a couple years ago, to reevaluate how it handled mission trips.

In fact, reviewing the matter of mission trips became part of an overall assessment of the church, and Community CRC developed a new vision statement, detailing how it wanted to worship, conduct its overall ministry, and do mission work.

“Our church went through a big visioning process to get where we are,” said Medendorp. “We decided we wanted to be an intergenerational church.”

Outside of Sunday services, the church has separate communities that gather in different locations during the week for fellowship, but the overall focus is on being the church together, across the various age groups, said the pastor.

The mission trip to New Jersey, he said, was a tangible example of this new approach in ministry.

“I poured my heart and soul into helping organize this trip,” said Joan Passchier, head of the service trip committee and a member of the church’s Youth Ministries Team.

“With the feedback we got after the trip, everyone told us that the most memorable part for them was the intergenerational piece.”

Matthias Mostert, a first-year university student, went on the trip as a “working partner” for a young man with developmental disabilities. He and the young man are good friends and sit together during Sunday services. They also enjoy playing guitar and going out to coffee.

Even though he was busy this summer, Mostert agreed to accompany his friend, who is 28, to New Jersey.

“I was there to help keep him on task, but everybody at the work site took responsibility for helping him,” said Mostert. “It was really good. A lot of us were able to see all of the things he can do, like rolling paint, sanding, and mudding drywall.”

Sandra Shoemaker went on the trip with her son, who has developmental disabilities, and her daughter, who also has challenges. Her husband decided to go as well.

Her son is enrolled in a building skills class in high school and was happy to able to use those skills in New Jersey. Among other things, the 19-year-old climbed on a ladder to install sheetrock under a house.

“My son loved the experience. It was a perfect opportunity for people to get to know him. And it was wonderful to see him sit with a different group of people every night when we ate dinner,” said Shoemaker.

Although he didn’t say much, he took part in the meals with many people who were otherwise strangers to him, she said.

“My whole family enjoyed going on this trip,” she added. “It gave us the chance to do something unique together.”

Mark Stephenson, director of the CRC’s Office of Disability Concerns, helped the church as it navigated some of the challenges involved in planning this trip.

“With creative thinking and fresh eyes, Community CRC and DRS saw the gifts that each member of the team brought to the project,” he said.

“By doing that, they made sure that each person belonged to the team, like a puzzle that's complete only when all the pieces are fitted into place.”