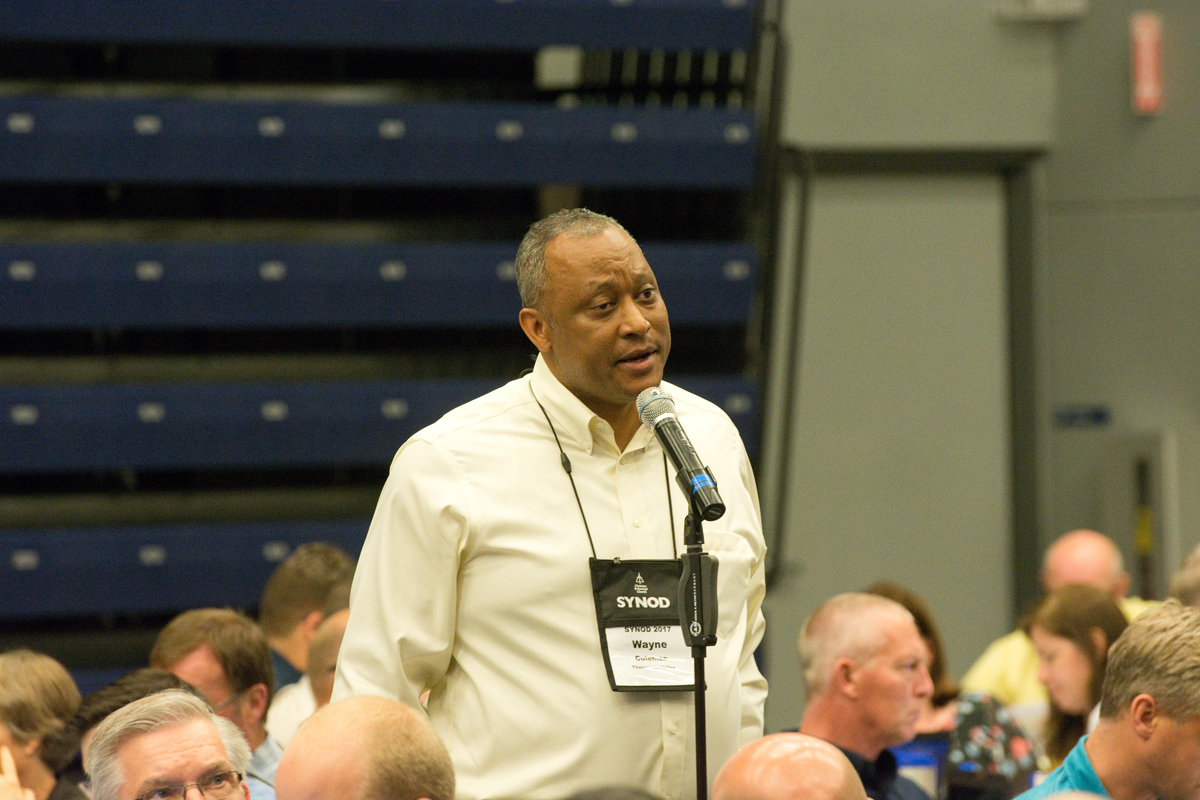 Wayne Coleman, Classis Thornapple: “To be theological is not just to be intellectual. . . . The Belhar Confession is about the Spirit of God.”

Originating in South Africa as the country emerged from apartheid in 1986, the Belhar Confession calls Christians to justice, unity and reconciliation in the body of Christ. After nearly a decade of wrestling with how it should respond to this document, the Christian Reformed Church has now decided to categorize it as a “contemporary testimony”

In the late 1980’s the South African churches that created the Belhar offered it to the worldwide Reformed community as a new confession. Over the past six years, the Christian Reformed Church has grappled with how it should respond to this document.

In 2012, synod decided against adopting it as a church confession, which would have equated it with the Heidelberg Catechism, the Belgic Confession, and the Canons of Dort. Instead, that synod created a new category, calling it an “Ecumenical Faith Declaration.”

Afterwards, CRC leaders discovered that other denominations were confused by the “ecumenical faith declaration” category.  In 2016, a proposal was made to reconsider this categorization. It suggested that the church consider adopting the Belhar as a contemporary testimony.

After much debate and prayer, Synod 2017 accepted this proposal. They also defined the category of contemporary testimony, put Our World Belongs to God into the category, and asked the executive director to develop some footnotes to the Belhar Confession to help define a Reformed response to certain lines. Synod 2017 also made a statement ensuring that Christian Reformed pastors, elders, and deacons will not be required to subscribe to the Belhar as part of their Covenant for Officebearers.

“Many churches have contemporary statements of faith, modern confessions, so this is something they would be able to recognize,” said Jim Payton, chair of the denomination’s Ecumenical Interfaith Relations Committee.

Responding to that concern, synod voted to add this statement to its decision: “Adherence to the Belhar Confession shall not be included in the Covenant of Officebearers.”

Some delegates decried some of the Belhar’s content, as had many before them at previous synods. They argued that the Belhar contains faulty, liberation theology, and makes overly inclusive statements that could be misinterpreted.

One of these was George Koopmans, Classis Alberta South/Saskatchewan. “The way to battle evil is not with bad theology,” he said. “The Belhar Confession is based on liberation theology...and says that no social factor can exclude one from the church. This is too vague.”

But some like Wayne Coleman, Classis Thornapple Valley, passionately defended that theology: “Many people say [the Belhar Confession] is not theological enough. That makes me nervous,” he said. “Theology is not just what’s in our head, it is also what’s in our hearts. The Belhar reminds us of our brokenness.”

Ecumenical guest Henk Stoker from the Reformed Churches in South Africa, which has long opposed the confession, asserted that “none of the churches in the global south embrace the Belhar, except [the denomination] in which it originated.”

He continued, “We care deeply about the conditions of your people, but the theology of liberation … is one of the reasons that [we] do not embrace the Belhar.”

The Reformed Church in America adopted the Belhar as a full confession in 2010. It was similarly adopted by the Presbyterian Church-USA in 2016.

John Bolt, faculty adviser from Calvin Theological Seminary, also questioned whether or not a new category was needed. “I was present at the 2009 synod on this campus and the 2012 synod at Redeemer. When the advisory committee came up with the recommendation to call the Belhar an ecumenical faith declaration we thought it was a stroke of genius,” he said.

Many other delegates had their say. The discussions led to a provision “to include footnoted comments with the Belhar Confession to provide Biblical and confessionally-grounded clarity to the parts of the Belhar that are widely recognized to cause disagreement and alarm.”

The last person to speak before delegates voted was young adult representative Onalee Sneller, who urged Synod not to “contemplate too long and refuse to take steps forward.” She added, “The Lord is faithful. If we take steps forward , the Lord will be faithful to his calling on us to be workers for justice.”

Synod then voted to place the Belhar into the category of contemporary testimony, although some later submitted their names to register their protest to the vote.

This decision by synod means that the Belhar is now considered: “...a dynamic statement of faith that serves the CRCNA... a statement that speaks to essential matters in a given time period... useful for study, faith formation, teaching, and worship.”