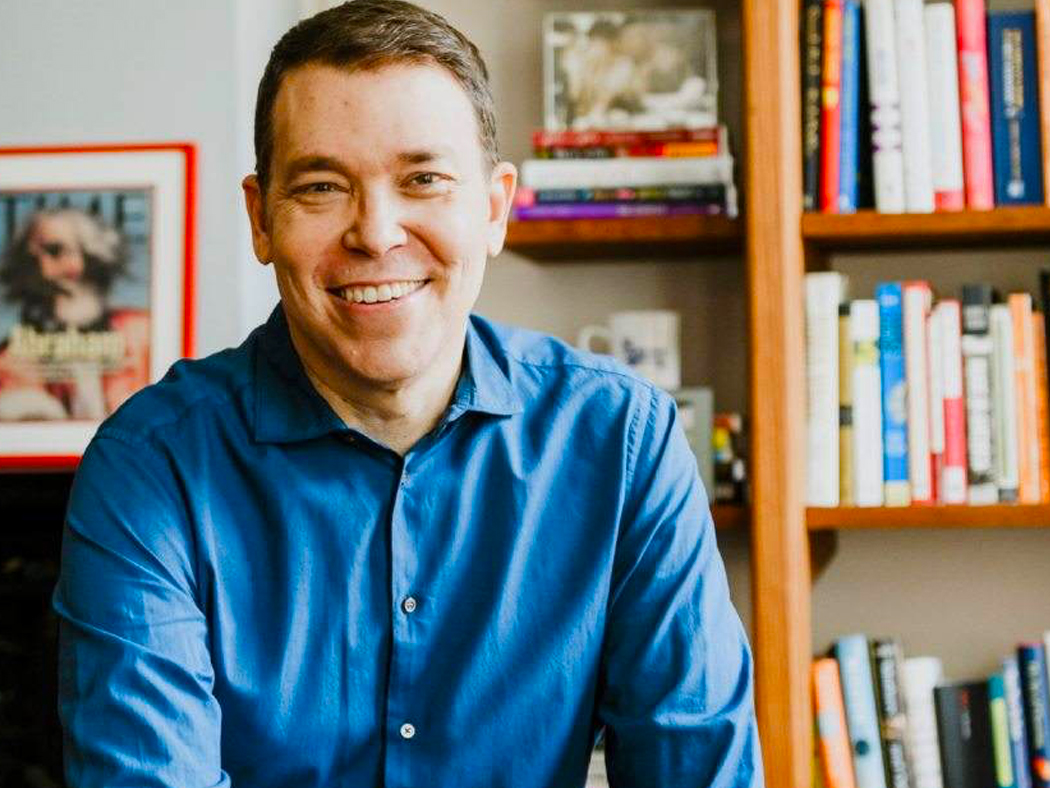 Soon after he was diagnosed with a rare and aggressive form of bone cancer in 2008, best-selling author Bruce Feiler had the idea of enlisting the support of a handful of his friends to serve as father figures to his two daughters should he die from the disease.

Deciding to call them the “Council of Dads,” he sent out letters to six friends, and all responded favorably. They would be honored, they told him, to step into the lives of his children, said Feiler in a presentation on Thursday, Jan. 21, at Calvin University’s January Series 2021.

“Creating the Council of Dads gave me something to do. I felt cut off and removed because of difficulty and pain. I was saying to them, ‘Come in, help, we need you,’” said Feiler. “The idea got me out of my head. I was doing something helpful for my wife and children.”

Ultimately Feiler survived the cancer, but his friends had already begun to connect in different ways with his family, sustaining them through the treatments and beyond. As it turns out, Feiler’s concept of a Council of Dads caught on and became a TV series.

Author of the new book Life Is in the Transitions:Mastering Change at Any Age, Feiler used the Council of Dads to illustrate how he was able to cope with and move through what he calls a “lifequake” as well as to offer advice on how others can creatively deal with major disruptions and crises in their lives.

Although he began the book long before 2020, the COVID-19 pandemic is a stark example of a lifequake. “Everyone right now is in a moment of struggle and transition,” said Feiler. “Everyone feels like they are living life out of order. This is not the way life is supposed to go.”

Feiler is also the author of Walking the Bible: A Journey by Land through the Five Books of Moses (2005), in which he writes of traveling through the Holy Land, stopping to read Scripture in the places where stories in the Bible happened. He also was the host of the prime-time PBS program Sacred Journeys with Bruce Feiler (2014), in which he retraced religious pilgrimages in France, India, Japan, Israel, Nigeria, and Saudi Arabia.

At the January Series, Feiler said his latest book about life’s transitions came out of the experience he had with cancer as well as two other unexpected and difficult experiences that happened around the same time: his father attempted, because of ill health, to kill himself; and then Feiler nearly went bankrupt during the Great Recession.

However, also at that time, as his father began to feel better, Feiler asked him to start writing down his life story. Seeing how eagerly his father did that and how much sharing his autobiography seemed to help, Feiler got an idea for a book.

The idea sent him on a five-year journey to interview hundreds of people all over the United States to see how they navigated times of hard transitions such as losing jobs or loved ones; how they beat addictions or were dealing with sickness; or how they moved on after a divorce or regained their faith after a major setback.

“I talked to people in all 50 states who felt like they had been walloped by life and asked them to tell me their stories,” said Feiler.

Once he finished, he and a team of researchers went through the material he gathered. “We had 6,000 pages of transcripts to comb through to see what themes were in the data,” he said.

What Feiler discovered was a world similar to the one he experienced when he had gotten cancer, his father attempted suicide, and he nearly went bankrupt — tough transitions can pile up; we need to expect the unexpected. The world today is complex and truly uncertain.

“I began to see that the idea of a predictable, linear life is dead,” he said. “I found many others who faced similar things. In fact, just about everyone believed life wasn’t going the way it was supposed to go.”

As he examined more and more data, he realized that from one end of the U.S. to the other, change was constant. Lives were in turmoil and transition.

“The idea that I will have one job, one religion, one house, and live in one city is gone. Half of Americans will change the way they practice their faith during their lifetime. On average, they will have 12 jobs, 11 moves.”

Although these disruptions are difficult, in this world in which uncertainty seems to define our days, these hardships can also be opportunities, said Feiler.

“Lifequakes can lead to life transformations,” he said. “This is a skill we are all going to need to master. When I started writing the book, I wasn’t looking for these themes. But clearly the book arrives at a time when the entire planet is going through massive transitions at the same time.”

The pandemic, said Feiler, is “a rare, collective experience during which we are all acting differently. Everyone is experiencing it in a different way.”

In fact, being flexible about your future is helpful.

“Many people, especially younger people, are embracing the opportunity of a nonlinear life,” he said.

Poring over the data and reviewing the stories he heard, Feiler concluded there are ways that many of us can follow as we face and try to get through a lifequake, a process that often takes up to four or five years. To start, realize that others have been in the same or similar situations. They have felt the same emotions.

“In times of change such as these, there is fear. How will I get through this? How will I pay the bills? How can I protect my children?”

Shame may also be a part of the process as we wonder how we could land in such a tough situation. Sadness and grief are also involved. Often the process can be described as a long goodbye to the past while moving into a new future.

“The key is to bring our emotions out into the open, to tell our stories of what we have been going through,” said Feiler. “What is also important is to have some rituals to help us through a hard time.”

An example of such a ritual occurred more than a week ago when U.S. President-elect Joe Biden, on the eve of his inauguration, joined with others to take part in a vigil, a ceremony illuminated by 400 lights at the Reflecting Pool near the Lincoln Memorial in Washington, D.C., to honor the more than 400,000 American lives lost to COVID-19.

Rituals, telling our own stories, offering one another help when they struggle — these things are important during times of disruption, he said.

“Remember, everyone will get stuck in this process. But it is important to bounce forward and not go back,” said Feiler. “It’s about growing and going to a different place.”