David Brooks Talks of Truly Seeing One Another 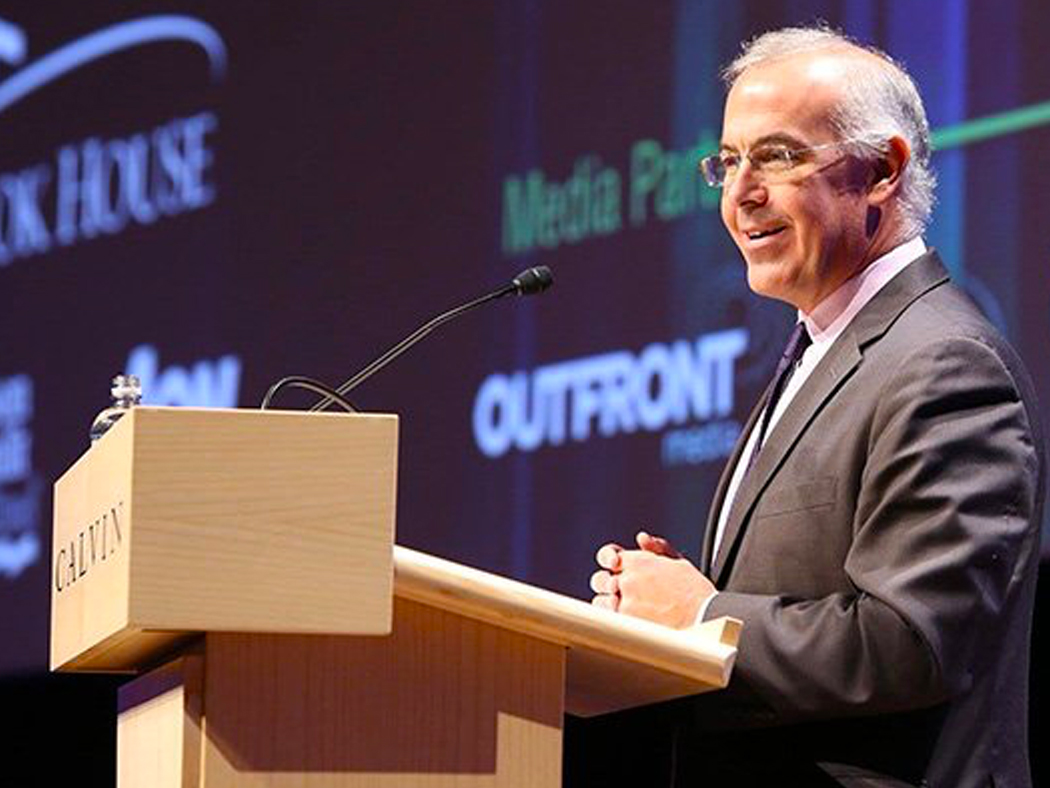 The best argument for Christianity is Christians who live, work, and “radiate joy and a radical personal beauty,” said New York Times op-ed columnist David Brooks, who this week received the 2020 Abraham Kuyper Prize for Excellence in Reformed Theology and Public Life.

When he was searching for faith several years ago, what brought Brooks closer to God were Christians who showed that deep joy and who introduced him “to a language to express what was inexpressible,” said Brooks in a virtual presentation hosted by Calvin University and Calvin Theological Seminary.

Established in 1996 and named after Dutch theologian Abraham Kuyper, the Kuyper Prize is awarded each year to a scholar or community leader whose outstanding contribution reflects the ideas and values characteristic of Kuyper’s vision of religious engagement in matters of social, political, and cultural significance in one or more of the “spheres” of influence in society, such as state, church, family, and work.

The conferral of the 2020 Kuyper Prize, for which Brooks was awarded $10,000, comes in the 100th anniversary year of Abraham Kuyper’s death.
Wearing a sport coat over an open-collar shirt in what looked like the living room of his home, Brooks said he became familiar with Kuyper a few years ago when friends gave him books to read to help him on the spiritual path he was traveling. Among other things, he said, he was drawn to Kuyper’s view “that the creation of culture is at the center of social life.”

Brooks said he also was inspired by Kuyper’s belief in the concept of society being divided into various spheres.

“Kuyper wants us to build fences. He thought all realms of life have a different purpose,” said Brooks.

Kuyper taught that each of these realms of life, said Brooks, “has its own identity. . . . There are God-given prerogatives, including that there should be a separation between church and state.”

In addition to his work with the New York Times, Brooks is also a commentator on “PBS NewsHour,” NPR’s “All Things Considered,” and NBC’s “Meet the Press.” And he recently wrote The Second Mountain: The Quest for a Moral Life.

“The Second Mountain provides valuable guidance in challenging the way we view ourselves as imagebearers and in the development of our character within society,” Jul Medenblik, president of Calvin Theological Seminary, said in a Calvin University news story. “In this book and in his broader work Brooks models a very Kuyperian way of thinking about humanity, culture, and civil institutions.”

As he considers the work of Kuyper, Brooks said, he recalls that when he was in college and even beyond that politics took up a small space or “sphere” in our culture. But that has changed drastically.

“Today we see the encroachment of politics into all aspects of life,” Brooks said. “Years ago, literature, art, culture, and history were significant. Politics were in a different realm, while many of us were in the realm of ideas. Back then, politics seemed small.”

But now politics, said Brooks, has begun “to slowly invade all of life. . . . As the political battles have grown, we have begun to see the world as more apocalyptic” — as us against them, as who wins and who loses. Politics have become a force that seems to be leading to ruin.

Even though he makes his living as a political commentator, Brooks is troubled by this turn in which politics seems to define everyone.

Because of this interest, fueled by the explosion of social media, he added, “Now I have to write all about politics.”

With today’s intense focus on politics, as a people we have “lost how we really see one another. We see people as a collection of tribes. We have lost our view of someone as a person,” said Brooks.

Living today in this mix of politics — the speeches, the arguments, the hot opinions, and even violent clashes — “the core thing that is lost is how we view reality,” said Brooks. “Competition today is key. We only see other people from the point of view of whatever is helpful to building up our tribe.”

We need, he added, to turn our attention from the flash and glitz and turmoil of politics to one another. “The problem is that we’ve ended up in a world in which no one is seen as to their moral character. We don’t look into the depth of their soul,” said Brooks.

“When we fail to see,” he said, “people fail to feel seen.” It is up to our cultural institutions such as Calvin University and Calvin Theological Seminary to help people to see others, to care and respond to the needs of others, said Brooks.

“God came in the form of a person,” he said. “God is not knowledge at an arm’s length. You can only come to God with an emotional form of knowing — in faith, the person is known.”

Brooks then quoted from Psalm 139:1-3: “O Lord, you have searched me and known me. You know my sitting down and my rising up; you understand my thought afar off. You comprehend my path and my lying down, And are acquainted with all my ways” (NKJV).

“God is a God of knowing love,” said Brooks. “St. Augustine talks of seeing with the eyes of the soul. . . . This is an affective knowing. It is a vulnerable love that needs to hold as well as to be held.”

Winding up his presentation, Brooks focused again on Kuyper, who, he said, believed and taught that “God loves different forms of people. The key is to see what separates everybody and what brings them together. Illumination into knowing [essentially unity amid diversity] is what we get from Kuyper.”

In receiving the Kuyper Award, Brooks joins a group of past winners that includes a Pulitzer Prize-winning writer, a Templeton Prize-winning philosopher, a prime minister, and a pair of U.S. ambassadors, to name a few.

The prize is funded through a grant from the late Rimmer and Ruth de Vries, whose recent $11 million estate gift established The de Vries Institute for Global Faculty Development.