Danjuma Gibson: Coming at Theology from the ‘Underside’ 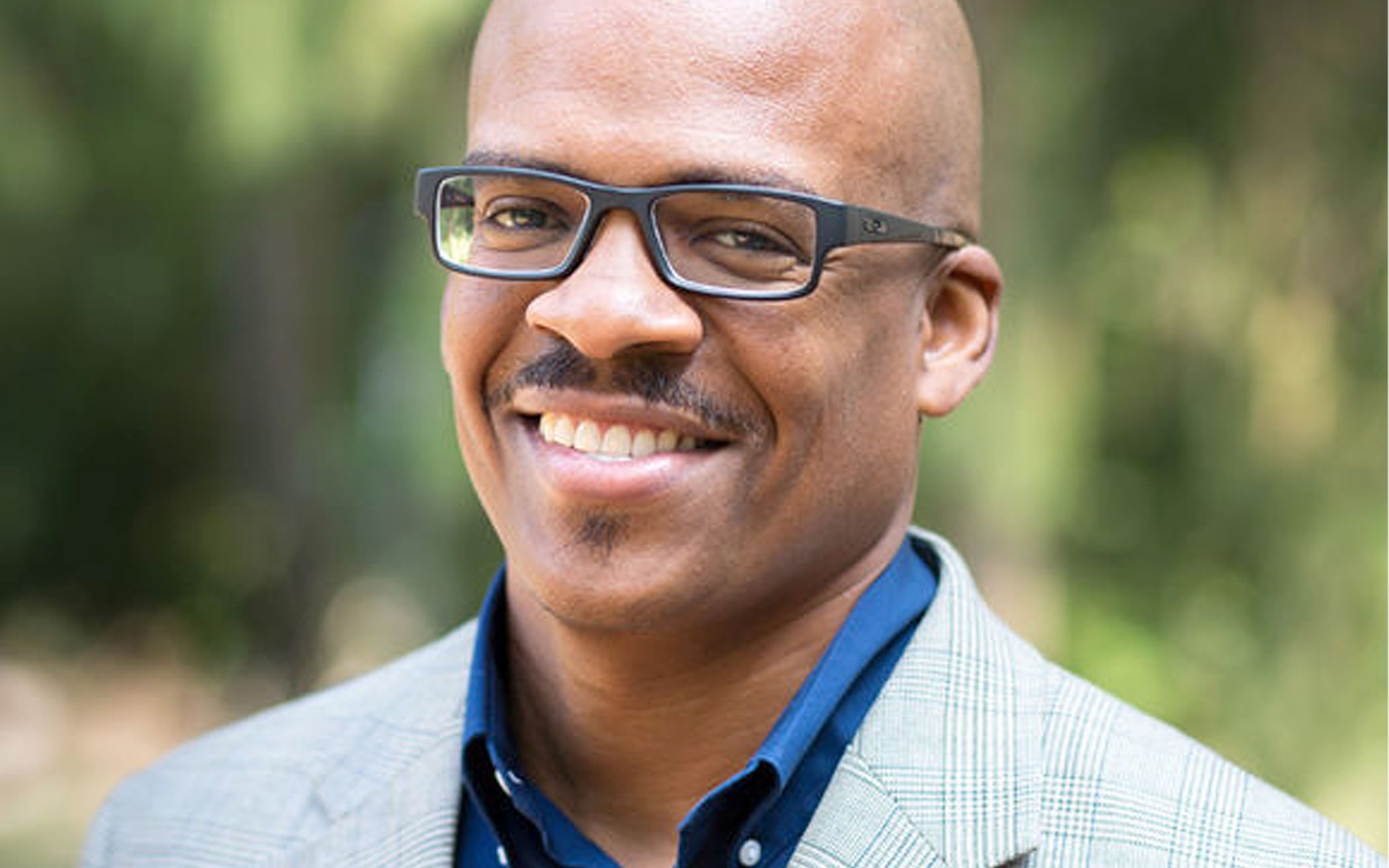 When his father, Roosevelt, came home for lunch in the Greyhound bus that he drove part-time, Danjuma Gibson would gaze at that big vehicle in wonder, he said.

As a youngster living on the south side of Chicago at the time, he could only dream of where that bus would take riders. And it made him wonder, even if only unconsciously, where life would lead him, where he might land when he grew up.

His father also worked full-time teaching drafting in the Chicago public schools, and his mother, Harriett, was a librarian for the city. From them, Gibson said, he learned by example the significance of doing meaningful work.

In his career, Danjuma Gibson has been a corporate banker, a pastor, and an author and scholar specializing in, among other things, the life and thought of abolitionist Frederick Douglass. Dr. Gibson is also a licensed psychotherapist, and — significantly for the Christian Reformed Church in North America — he was recently the first African American to be awarded tenure at Calvin Theological Seminary.

“Calvin Seminary is grateful for Dr. Danjuma Gibson taking the steps of faith to join this community, and we are so very thankful for the contributions, insights, and wisdom that he brings to us and especially to our students,” said Jul Medenblik, president of the seminary.

“It is clear that Dr. Gibson is a gift to us at CTS and to the CRCNA. We are so glad for his . . . being granted tenure as an affirmation of his strengths as an engaging teacher, insightful scholar, and thoughtful pastor, as well as confirmation of his calling to serve at CTS.”

Being Shaped at Home

Along with the many other things his father was involved in as Gibson grew up, he said, was their local Baptist church. His father served as a deacon and eventually was licensed and ordained to preach.

“My father and mother both came out of the South, and they overcame having had a front-row seat to Jim Crow and how it affected people,” he said.

Like many black people from the South, their faith was crucial to them and flowed through all aspects of their lives, he said. It helped them to overcome hardships and to have hope even under tough circumstances.

“I am deeply formed by my black religious experience. It is an integral part of who I am. I am unapologetic about that. I am also acutely aware that I stand on the shoulders of a countless number of black scholars, professors, pastors, and others in the black church who have gone before me, have prayed for me and my contemporaries, and have blazed a trail,” he said.

Dr. Gibson hardly ever saw his father stand idly by, whether it was driving a Greyhound bus during the summer, doing construction work, teaching other teachers in the Chicago Public School system about the latest drafting technologies, or being active in their church.

“From my father I learned to always work on improving myself, to always strive to be better, and to always press forward in life—no matter the setbacks or disappointments,” said Gibson.

And from his mother, he said, he gained a love of learning and literature and, perhaps most important, the desire to be his authentic self.

“She has a tongue for speaking truth and wisdom,” said Gibson. “She lets you understand where she is coming from.”

Perhaps in part she is the person from whom he gets his prophetic voice that works to cut through categories and stereotypes to reach the core values and circumstances — the inherent humanness — of people and situations, he said.

“It is from watching my parents and their influence on me that I understand faith, excellence, and how to seek to do theological praxis in my scholarship and in the classroom.”

All of the love, drive, and religious commitment from his parents, said Gibson, broadened his vision and filled him with a confidence that he too could succeed in a world that frequently threw up roadblocks to prevent people of color from achieving their goals and dreams, from using their gifts to their full potential.

“I never grew up thinking I could do only one thing or be only one thing,” said Dr. Gibson. “Like my parents, I do many things. They taught me never to allow another person to define who you are and what you can do.”

His education testifies to that: Gibson attended a Catholic grade school; earned degrees in business, urban ministries, and Christian studies; and received his Ph.D. in pastoral theology, personality and culture, and clinical counseling from Garrett-Evangelical Theological Seminary in Evanston, Ill.

As for his faith formation, said Gibson, he embraces his entire past of attending a Catholic elementary school, growing up in the Baptist church, receiving his license to preach in the Church of God in Christ (a Pentecostal tradition), and ultimately being ordained in a nondenominational church.

“The variety of religious experiences in my background compels me to a kind of cosmopolitan perspective when I imagine practical theology, when I am teaching in the classroom, and when I imagine what the church could be when it is operating at its best,” he said.

Stepping into His Future

Rarely has Gibson done one job at a time. While working as a commercial banker in Chicago, he also was ordained and became the fifth pastor of a century-old, nondenominational church in his old stomping grounds of south Chicago. Through it all, he said, he “was listening and striving to understand God’s grace and covenant, and God’s providence in everything.”

As a pastor, he added, he has always placed a heavy emphasis on the narrative of Scripture. In addition, in his theology, he said, “I gravitate to people who have done theology under pressure and on the underside of history. That is how I understand that Jesus did his theology—under fire and in places of oppression.”

While Gibson didn’t grow up in the Christian Reformed Church, a Reformed accent was a key part of his background, as God’s covenant, sovereignty, providence, grace, and the centrality of Scripture have remained foundational themes in his work and scholarship.

He is attracted to the teaching of such Reformed theologians as Herman Bavink, who believed “God is revealed most fully in all people of the earth,” he said. And he is inspired to think that John Calvin was a pastor and theologian in a refugee community in Geneva.

Finding a New Place in the CRCNA

After finishing his Ph.D. at Garrett Seminary,  Gibson applied for a position at Calvin Theological Seminary. He was hired as a lecturer in 2014, and he was appointed an associate professor of pastoral care by Synod 2016.

In the classroom, said Gibson, he looks at students as being part of the family of God. Each comes with his or her own experiences, strengths and weaknesses, thoughts and dreams. And he sees it as his role, in whatever courses he is teaching, to love and encourage his students.

“If I’m not teaching with the purpose to love God, yourself, and your neighbors and to practice freedom, what am I here for?”

Expanding the worldview of students and giving them a deeper sense of sacred purpose is evident in the assignments they are given, in the reading they must do, and in how he engages them in the classroom.

“Knowledge for the sake of knowledge is pointless, and too much of theological education exemplifies this. I’m a practical theologian,” said Gibson. “I teach in a way that tries to help you transform yourself and your community.”

Besides being a practical theologian and someone who seeks to make a difference in society, Gibson is also an incarnational theologian, he said, teaching in a way that seeks to allow the Spirit to enter into the lives, ministries, and the very heart and soul of his students.

“The biblical narratives and stories are powerful. I teach a theology that doesn’t back away from inequality, from things like structural racism. . . . If you don’t do theology that has a distinctive purpose to transform and liberate, then that is not the gospel.”

Focusing on pastoral care, he encourages students to imagine and put themselves in the place of others, to truly understand and empathize deeply with what they are facing and fearing. For example, one of his recent scholarly articles examined the challenges and struggles facing young black boys in Chicago.

Besides his parents, said Gibson, another substantial influence on him was his experience attending Morehouse College in Atlanta, Ga., the school where such religious and social justice leaders as Howard Thurman and Martin Luther King, Jr., studied.

“At Morehouse the fullness of your humanity was recognized immediately and completely,” he said. “At the same time, it was hard to be considered special there. The demand for excellence was normative and expected. To be singled out because you excelled was like saying water is for drinking.”

And because of his love for how the place shaped him, said Gibson, he makes a kind of pilgrimage every summer back to Atlanta to, among other things, walk the Morehouse campus.

He appreciates seeing those buildings in which he had classes, the places in which he and his friends built relationships, and the chapel they regularly attended. The atmosphere, the deep sense of place, raises him up and inspires him all over again, he said.

As he walks the campus, said Gibson, all that he is and has done can drift through him, reminding him both of where he has been and of the roots of his history that sustain him.

At Morehouse, he said, he is in the South, that abiding and complicated place that has such a harsh past of oppression. But he is also reminded of the release that comes with education, with finding what God wants you to do and going out and doing it — that is, doing it or doing many things. Indeed, he believes, it is a great privilege, even a duty, to do what you do with the full knowledge that it is the Word made flesh that dwells among us all.

“Going there is a spiritual journey. It is my Mecca experience. I need to make it every year,” he said.

Being at Morehouse, he added, helps to remind him “that what you do wherever you are, you need to make it better and find ways to serve those who are coming behind you. . . . When I’m gone from Calvin Seminary, I’d like it to seem that I left a trace that I was here. That’s all we can do.”