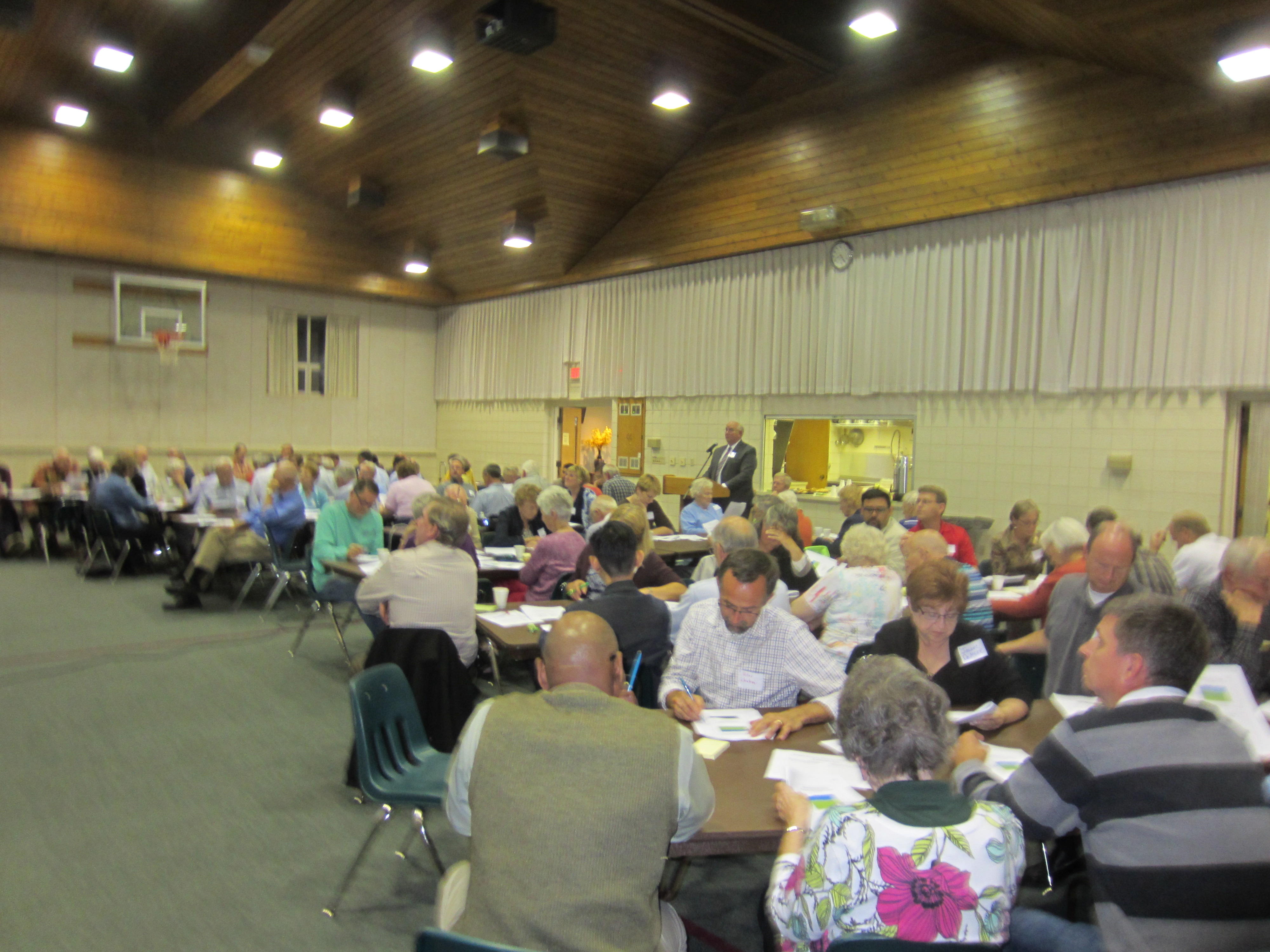 Churches across North America, including the Christian Reformed Church, are living in a time of unprecedented change, researchers say.

Mainline denominations are losing members and even the once fast-growing evangelical churches are seeing their membership plateau.

Local churches are caught in this upheaval, working hard to keep younger members from leaving and sometimes facing the possibility of having to close their doors as aging members are not replaced.

Social media and technology are reshaping how churches and denominations carry out ministry. Educational institutions find themselves attempting to determine their role in the midst of this groundswell of change, and individual church members often feel overwhelming anxiety as they look toward the future.

These were some of the statements, based on research from various sources, that about 100 CRC members heard when they gathered in a fellowship hall in West Michigan on Oct. 10.

They were there to hear and respond to a presentation describing critical issues that Christian churches more broadly and CRC congregations and the denomination itself specifically are facing.

Meeting at Alger Park CRC, they were the first of several groups of CRC members across North America who will be learning about and discussing these issues in coming weeks.

“We are here to discuss some of the key ministry challenges that the CRC faces and what it would take to fundamentally reframe the ministry plan so that we can continue participating together in God's mission,” said Rev. Thea Leunk, one of those who presented the information.

“We want you to react and to tell us what challenges you see,” said Leunk, pastor of Eastern Ave. CRC in Grand Rapids. “We want to develop a ministry plan that congregations today say describes what they want to do in their context.”

Titled “Discerning God's Mission Together: Join the Conversation,” the report was prepared by the CRC’s Strategic Planning and Adaptive Change Team (SPACT), which was mandated by Synod 2012 to review the denomination's ministry plan and come up with a new one.

The report, including a 33-page PowerPoint presentation, and other materials will be available soon on a SPACT website.

Meanwhile, SPACT team members are starting to take their report to regional CRC gatherings across North America. The hope is that input from these meetings will help the CRC’s Board of Trustees to formulate a new ministry plan.

Leunk was joined at the meeting in Grand Rapids by John Bolt, the CRC's director of administration and finance. They unveiled the SPACT Report to representatives from several West Michigan classes.

Assessing issues facing churches outside the CRC and then focusing solely on the CRC, the report discusses how the church is being buffeted by many realities — from a growing lack of denominational loyalty to the changing face of church members who are coming to the U.S. and Canada from Spanish-speaking countries, Asia and elsewhere.

At the same time, people who characterize themselves as having no religious affiliation at all are growing and those who report that they are members of non-Christian religions are on the upswing.

People who attended the gathering had an opportunity to discuss what they heard after different parts of the report were presented, and then to offer their reflections.

One woman said that her congregation is struggling with a double-edged reality. Younger families are leaving her church, and this in turn discourages other young families from attending because they think they will be alone.

A man said young people may not be attending church, but isn’t there an important issue here? Just because membership is down, he fears churches are lowering their theological standards in order to bring people in.

For instance, he said, what about the matter of church discipline? Does that go out the window?

During his presentation, Bolt said the percentage of committed CRC members who attend church every Sunday has remained fairly steady over the last 20 years.

He also said that the report shows that there are those who seriously question the qualifications of leaders, including ministers, and whether they can effectively lead in today's complex culture.

The report shows as well that there are concerns over the topic of multicultural ministry in the CRC. On the one hand, he said, there is broad agreement that being multicultural is important. But when that comes down to the local congregation, it is a different story.

"Few congregations have structures in place or have dedicated resources toward addressing multicultural issues," he said. "We talk about it a lot, but we still have not executed it very well."

On both sides of the border, there is an income disparity that continues, with those in the middle class losing their status and moving closer to the poverty level and those who are in higher income brackets making more money.

During another session in which participants could respond to the issues, one man said that the “North American culture of individualism clearly discourages loyalty to the CRC and impacts the declining membership. We must establish ourselves as a unique presentation of a Reformed denomination if we are going to turn this around.”

Reacting to figures giving an overview of the ethnic makeup of students attending Calvin Theological Seminary, one man said he was very disturbed.

While one part of the SPACT report shows that there is an increasing number of Hispanics in the US, “it looks like Hispanics aren't even on the radar of the seminary,” he said.