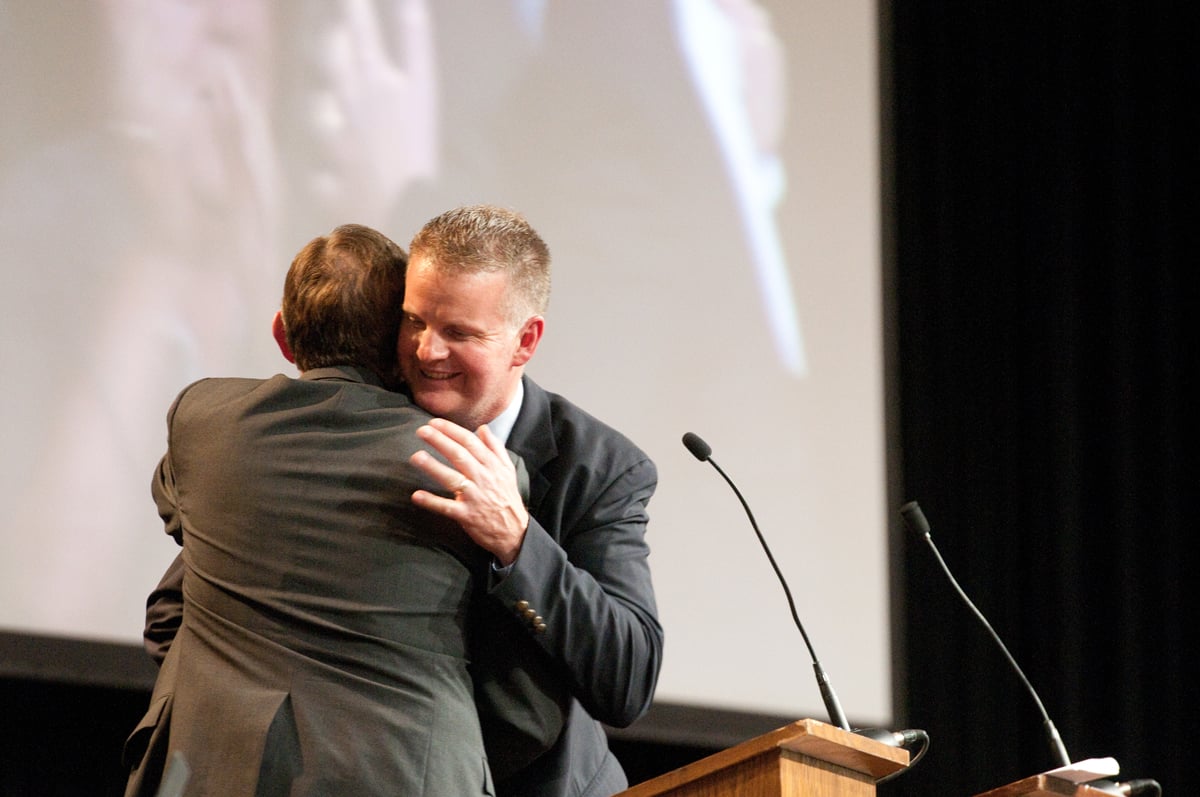 The Reformed Church in America (RCA) and the Christian Reformed Church (CRC) made history on Saturday evening, when the synods of both denominations held a joint session and adopted a resolution to work more closely together. It is the first time that has happened since the CRC seceded from the RCA in 1857.

(In 2011, delegates from the two denominations met to ratify a resolution about translations of the Reformed confessions that had previously been adopted separately by each of the synods.)

CRC and RCA delegates voted simultaneously and unanimously to adopt a resolution declaring that “the principle that guides us, and the intention that motivates us, is to ‘act together in all matters except those in which deep differences of conviction compel [us] to act separately.’”

The resolution instructed the CRC’s Board of Trustees, and the General Synod Council of the Reformed Church in America that the future relationship between the two denominations must be guided by this principle.

Dr. Wesley Granberg-Michaelson, general secretary emeritus of the RCA, placed the historic division between two denominations into a global context.

“The idea that any group with a slightly different understanding of the truth can separate itself from a denominational structure has been so commonplace, we barely give it a thought,” he said.

“What we confess as the one holy catholic church has become endlessly divided. Our present shameful sinful state of affairs is that there are 43,800 denominations in the world. Our proper response should be confession and repentance.”

Rebecca Warren, chair of the CRC’s ecumenical and interfaith relations committee, spoke of the history of the two churches, noting that, despite their common roots, “the churches decided that what divided them could not be bridged. They parted ways, creating separate agencies and churches.”

Others spoke of more recent hurts. Brian Seifert, a CRC delegate from Cadillac, Mich., and David Schut, an RCA delegate from Sioux Center, Iowa, addressed the gathering together. Both told of growing up hearing pejorative comments about the other denomination. Seifert said he once heard a CRC pastor refer to an RCA pastor as ‘the great Satan.’

“On behalf of the CRC,” he said to Schut, “I ask forgiveness.”

Jeff Jappinga, from the RCA’s commission on Christian unity, noted that in recent decades, an increase in cooperative efforts between the two denominations is changing the landscape. “What we have done together has advanced the gospel in so many ways,” he said.

The list of those cooperative efforts continues to grow. There are congregations that belong to both denominations; church multiplication efforts are combined in Kingdom Enterprise Zones; pastors may receive calls to churches in the other denomination; the Disability Concerns ministry operates in both denominations; World Renew provides domestic disaster response for both; the Reformed Benefits Association administers the U.S. insurance plans for both churches; the new Lift Up Your Hearts hymnal was produced by a CRC-RCA partnership; the IT departments have joined forces. The list goes on.

Cooperation also happens in local communities. Doug Van Aartsen, an RCA delegate from Ireton, Iowa, recounted a time when he worked with the CRC pastor in the same town. He said that a trailer park in Sioux Center (Iowa) that housed a number of Hispanic families was being closed and the families were being relocated to Ireton.

“The town, to its shame, was opposed to this,” Van Aartsen said. “The CRC pastor and I stood against them. There is now a group of Hispanic people in Ireton, and we have a good relationship.  It was an example of two congregations working together at a local level. I’d like to think we made a difference.

As Dutch references abounded, including references to the historic rivalry between the two denominations’ schools, Hope College and Calvin College, one delegate noted that it seems that the issues are only between folks with Dutch backgrounds.

“I came [into the CRC] in 2001 and I’ve been treated really well,” said Rev. Ron Chu, a CRC delegate from Classis California South. “I hear the same thing from Korean pastors in the RCA.

“You are willing to embrace people from other ethnic groups, and I hear that you guys are arguing among brothers and sisters. That is something to think about.”

The adoption of the resolution was concluded with cheers, hugs, handshakes, and applause as delegates from both churches joined hands to sing together the doxology.

On Sunday morning, delegates are invited to attend a church of their choice. During the afternoon, a variety of workshops are available to delegates from both denominations, followed by a community-wide synodical service of praise and community picnic supper at the Vermeer Pavilion. Synod will convene again at 8 a.m. CDT on Monday.