CRC Joins with Others in Support of Refugees 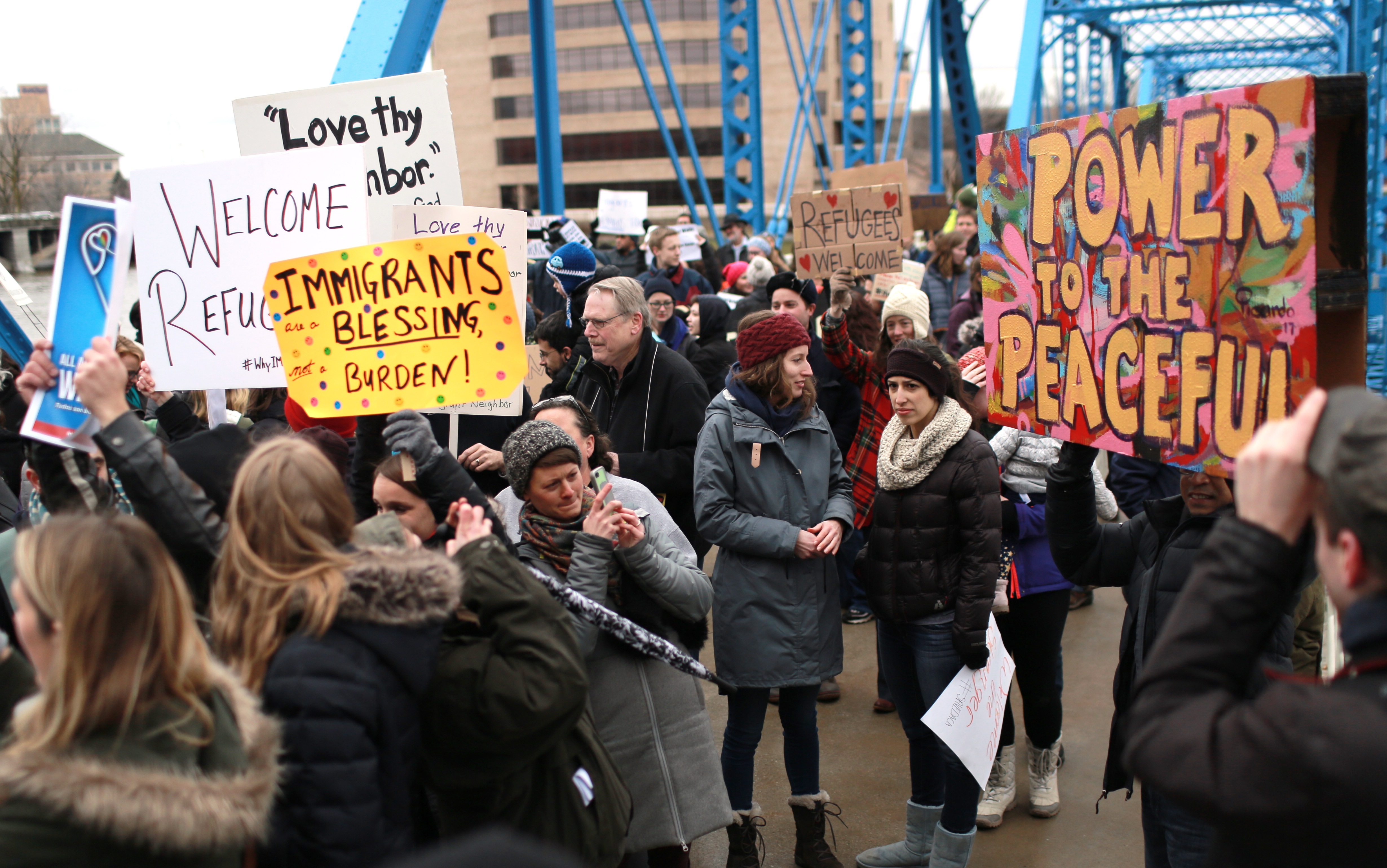 Christian Reformed Church members joined a gathering of over 250 people in Grand Rapids, Mich., last week to stand in solidarity with immigrants, refugees, and Muslims and declare they are welcome, in response to President Trump’s executive orders issued last Friday, which include a halt to the U.S. refugee program.

On Friday, Jan. 27, Trump signed an executive order temporarily halting the U.S. refugee program, indefinitely suspending admission of Syrian refugees, lowering the admission ceiling from 110,000 to 50,000 refugees for FY 2017, giving preference to admit Christians from abroad who are being persecuted for their faith, and issuing a 90-day order blocking admission of people to the U.S. from seven predominantly Islamic countries.

“A policy like this one is a devastating blow to the infrastructure of our crucial resettlement programs, and it’s also just morally wrong. I hope the CRC speaks — loudly — against this policy which so directly works against our unique and historic call in this denomination,” said Peter Vander Meulen, coordinator of the CRC’s Office of Social Justice, which partners with Bethany Christian Services in West Michigan to empower churches to cosponsor refugees in their community.

The CRC has a long history of offering welcome to refugees — both in the U.S. and in Canada.

“The CRC has welcomed refugees for as long as I remember — it’s part of what makes us who we are in this denomination,” said VanderMeulen.

Gathering on the pedestrian bridge that spans the Grand River in downtown Grand Rapids, participants expressed their love for refugees and their concerns about the United States’ further distancing itself from the global refugee crisis.

Clementine Sikiri, a Grand Valley State University student and refugee from Rwanda, spoke at the event and said she is grateful for being accepted and welcomed by people into the life of West Michigan.

“I have been encouraged to find my place and use my gifts here,” she said. “I pray that all those who are still waiting for a safe home to begin their lives again will find it.”

As part of the event, people held hands and marched across the bridge chanting “Bridges Not Walls!”

This gathering was one of many across the U.S., including protest gatherings at airports, to object to Trump’s orders that went into effect Friday night.

“Grand Rapids is a place that extends welcome and hospitality to people of all faiths and of all nationalities. America is that place too, and this executive order flies in the face of this most basic human value,” said Kelsey Herbert, immigration coordinator for OSJ.

Steven Timmermans, executive director of the Christian Reformed Church in North America, agrees. In a statement about immigration that also includes a statement on the shooting that occurred on Sunday at a mosque in Quebec, Timmermans points CRC members to Our World Belongs to God: A Contemporary Testimony.

The testimony, he writes, “reminds us that ‘all spheres of life . . . bear the wounds of our rebellion. Sin is present everywhere – in pride of race, arrogance of nations, abuse of the weak and helpless.”

He goes on to say, “As we take comfort in the fact that our world belongs to God, we also remember our role as agents of Christ’s redemptive work. In times like these, Synod 2010 instructed us to ‘speak out against and seek to reform laws and practices concerning the treatment of immigrants that appear to be unduly harsh or unjust.’”

Many CRC congregations have opened themselves to refugees, including Syrian families — and find the specific country bans to be alarming.

“My church community has had the honor of welcoming and mentoring a Syrian refugee family. They came to the U.S. with very few earthly possessions, simply seeking safety for their family after fleeing war for many years,” said Claire McWilliams, an elder at Loop CRC in Chicago.

“No matter what the risk of welcoming refugees might be, we seek to follow the call of the church, to live and love as Jesus did, extending hospitality to those who need it the most,” she said.

“From the day God called Abram to begin a new people by becoming a refugee, to the day God's Son was born as the ultimate stranger in our midst, the call of God's people has been clear: welcome the stranger; remember that you were once slaves in Egypt; make extra provision for the alien within your gates,” said Hoezee.

“This open stance to the stranger is not optional for God's people — indeed, it is part of our spiritual DNA in Christ,” said Hoezee. “In fact, when we welcome, clothe, feed, visit the stranger, it is finally Jesus whom we encounter. We must not be told we cannot do this. Ever.”

Churches that have become involved in resettlement efforts have found it to be positive and energizing, and they are alarmed to hear of the policy change.

"Our church has been deeply impacted by refugee resettlement; we have been enabled to see the kingdom of God in new and beautiful ways,” said. Rev. Jenna Brandsen, a pastor at Pillar Church in Holland, Mich.

“I would be heartbroken if any church were not given access to experiencing these relationships, especially during a time in our world when they are needed most," she said.

Kristine Van Noord, a coordinator at Bethany Christian Services in Grand Rapids, said the CRC is known for the strong role it plays in the resettlement of refugees.

"The Christian Reformed Church is a crucial partner in our work to provide hospitality to refugees — and has been for some time. In fact, the CRC has a nationwide reputation among resettlement organizations because of its robust response to refugees," she said.

Participants at the “Bridges Not Walls” event were asked to contact their member of Congress to urge them to speak out against this policy and do whatever they can within their power to see it reversed.