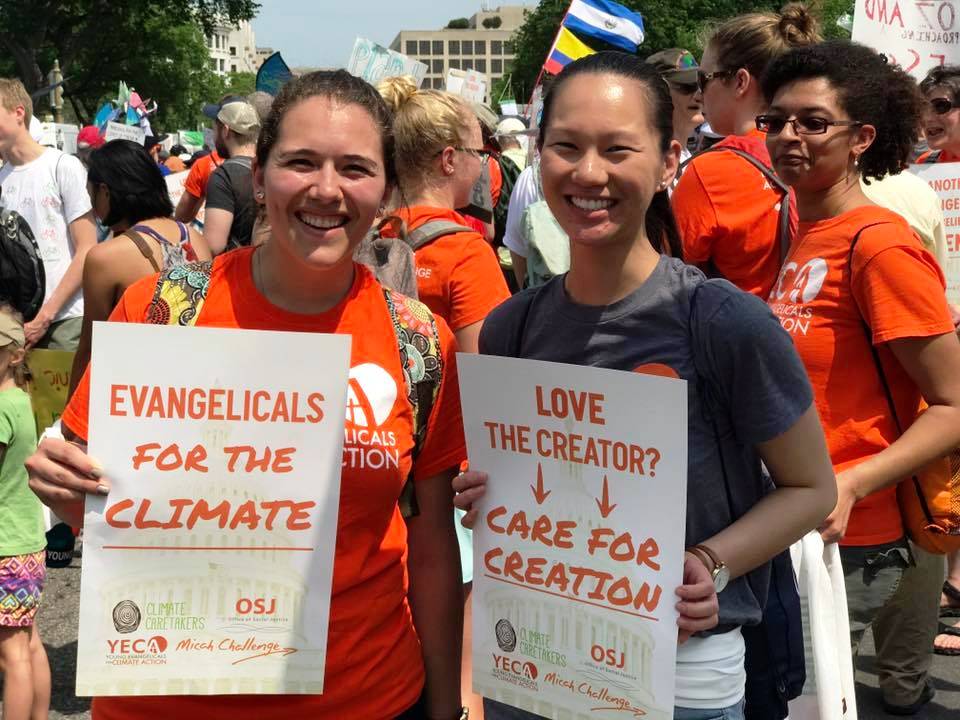 A group of approximately 25 Christian Reformed Church members joined a crowd of more than 200,000 people at the People’s Climate March in Washington, D.C., this past Saturday, Apr. 29. Most of the CRC members who marched are involved in the CRC’s Climate Witness Project (CWP).

Their participation in the march was part of a broader event called Acting in Faith: Evangelical Climate Advocacy Days, organized by the Office of Social Justice, Young Evangelicals for Climate Action (YECA), and Climate Caretakers. The group that attended the three-day event included evangelical Christians from across the United States.

Group members marched in the People’s Climate March on Saturday, attended advocacy training and worship on Sunday, and met with members of Congress on Monday.

The goal of the event was to demonstrate that Christians care about climate change and to encourage elected officials to pursue sensible climate policy changes, according to Steve Mulder, event organizer and coordinator for the CRC’s Climate Witness Project.

“I enjoyed marching with fellow Christians from around the country and hearing the specific ways they are working to care for our Father's world,” said Dale Hulst, a CWP partner at Alger Park CRC in Grand Rapids, Mich.

Claire McWilliams, a CRC member who is also a member of YECA, echoed similar thoughts: “I loved the contrast between marching on Saturday to lobbying and bridge building on Monday. I loved the opportunity to share about how I advocate for climate because of my faith.”

Organizers arranged 37 meetings on Capitol Hill with members of Congress or their staffers. In the meetings, the group stressed the importance of taking action on climate change.

“It's the poor and the vulnerable that suffer first and the most because of a changing climate, and it's clear in Scripture that God stands up for the weak — and so must we in Jesus' name,” said Phillip Leo, a CWP regional organizer in the Chicago, Ill., area. “Marching and lobbying for me isn't about partisan politics but about taking seriously my role in the ministry of reconciliation.”

“The advocacy day was charged with energy and passion,” said Barry Meyer, a CWP regional organizer in the Denver, Colo., area. “The entire event was an opportunity to make my voice heard and to meet a wonderful group of passionate Christian people.”