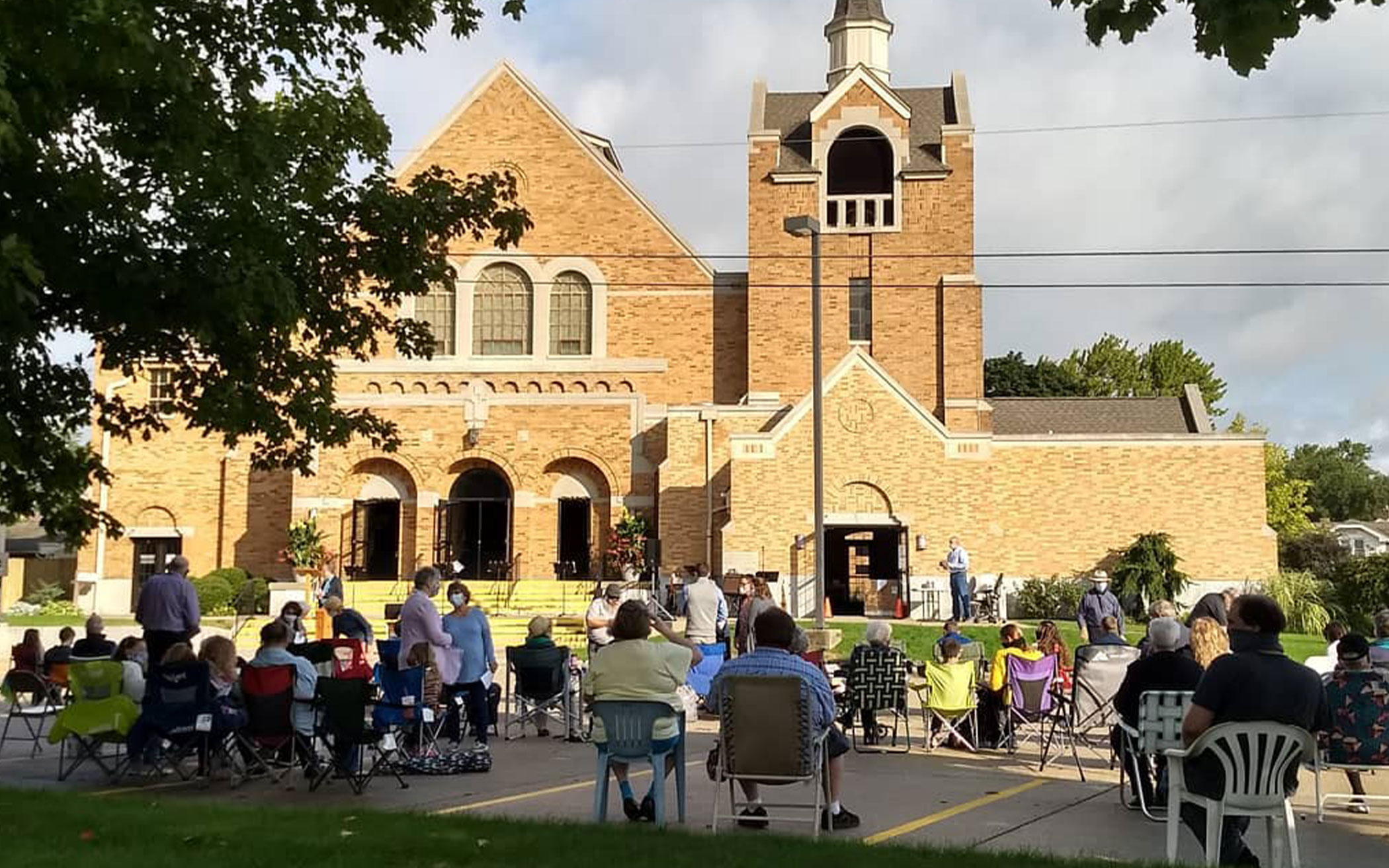 A CRCNA congregation in Wyoming, Mich., and another in Sarnia, Ont., have both had to face sickness among their members during the COVID-19 pandemic — and in Sarnia there have been deaths.

But each congregation — as they mark the one-year anniversary of lockdowns and safety measures due to COVID-19’s arrival in North America — is giving thanks to the Lord for the ability to make it so far. They hope the end of the pandemic is in sight, but they will be carrying on, no matter what.

Dealing with the COVID-19 pandemic was only one of the challenges faced by Lee Street CRC in Wyoming, Mich., over the past several months.

Their pastor of many years retired, as previously scheduled, in August 2020, and the pastor of their Spanish-language congregation left to take a position as a military chaplain.

Other ministers have been filling in — and that is going pretty well, but then several of the congregation members, including the church administrator, Rachel Bouwkamp, became sick to varying degrees with the virus.

For Bouwkamp, the sickness laid her low, she said, especially with fatigue, for several days — but she kept working while under quarantine. During this entire period of the pandemic, she has served as an important hub around which much of the church revolves.

“It has been a very different time for us. There have been so many variables,” said Bouwkamp, who has worked at the church for 15 years. “We had a member who was very sick and had to be hospitalized. He is doing OK now. . . . But this disease is very real.”

Soon after the church had to stop gathering in person in mid-March 2020, Kent Rottman, the pastor who would retire in August, recorded his sermon from a farm owned by his daughter. Dressed in shepherd’s robes and surrounded by sheep, he preached from Psalm 23, which begins, “The Lord is my shepherd, I shall not want.”

The recording of the sermon was uploaded to YouTube for church members to view. For a few weeks afterward, the pastor and a few praise team members recorded worship services in the sanctuary and then posted those on YouTube as well.

During that period, they taught older church members, unfamiliar with the internet, how to watch the services on their computers and TVs.

Then, “as soon as the warm weather came, we went outdoors for our services,” said Bouwkamp. “We were very fortunate that — other than one day when rain threatened but held off — the weather was good.”

On one occasion they also held a bonfire in the evening and invited people to attend — maintaining safe distancing from one another. Sitting around and watching the flames move, church members shared about their experiences of dealing with restrictions from the pandemic.

By the time fall came around and it was too cold to meet outside, they had worked out the ability to livestream their services. And when it was allowed, church members returned to the sanctuary for gatherings, wearing protective masks and still keeping their distance.

For her part, she said, the year has been a challenge. But “God knew exactly what I needed when I needed it,” Bouwkamp added. “I haven’t done this alone. We have a wonderful church family, and we have done this together.”

Nearly 90 years old, First CRC in Sarnia, Ont., has a mix of older members and young families, said Dave Van Berkel, the pastor. They are a sturdy and faith-filled congregation.

But this long season of the pandemic, which has taken the lives of people in his church, has been difficult, he said.

“We stopped meeting in person March 15, 2020, and went to Zoom services, which started out a little rough — lots of sound issues — but we have since gotten much better.”

They averaged around 65-70 Zoom participants each week, with probably about 100-120 people watching.

“We also post the services on our Facebook page, where they're probably watched by a few more,” said Van Berkel.

A COVID-19 outbreak within a few of the churches in southwestern Ontario, including First CRC, came after a large group of seniors who'd been on a trip to Europe together returned home at the end of February 2020.

“We had a fair number of folks come down with COVID-19,” said Van Berkel, “and probably half a dozen deaths as a result in the three Sarnia churches.”

“It was a scary time because it seemed like every week we'd hear of one or two other folks getting the virus, and we just didn't know how bad it would get.”

One of First CRC’s seniors, who also has diabetes, was in the hospital for a few months, the pastor said, “and it was touch and go for a while. He's thankfully pretty much back to normal now, and he credits God for miraculously healing him.”

Another one of the church’s seniors was in the hospital for several months and is now in a nursing home, having not regained enough strength to live on his own yet.

“We also had a husband and wife pass away within months of each other — she of COVID-19, he of cancer — which was a real tragedy because they'd also had a brother-in-law nearby pass away from COVID-19 too.”

During this time, Van Berkel has gravitated to texts such as Psalm 91, Romans 8, and Lamentations 3, which speak “of confidence in the face of struggle, hope in the midst of grief,” he said.

“I also did a series on the Lord's Prayer and the book of Philippians. And we had a ‘living stones’ series, where I videotaped people's faith stories and shared those as part of the service,” said Van Berkel.

“One of the biggest challenges was in staying connected to folks when we couldn't physically be together. Early on, our elders/deacons committed to calling everyone in their districts every week, just to check in, to see how things were going, etc.”

In addition, they start their Sunday-morning Zoom service — which is set for 10 a.m. — at 9:30 so that people can welcome and greet each other before worship. “We call it a ‘coffee half-hour,’” said Van Berkel.

And, he said, “we have breakout rooms after the service too, which are fairly well attended. Yet all of these are still not as good as meeting in person.”

Despite the  deaths they’ve had in the congregation over the past year, said Van Berkel, they haven't been able to hold funerals for and grieve together as a church, which has been tough.

“But overall I think our church has done well,” he said. “Our Zoom attendance and giving have remained consistent, and our donations to the local food bank and a few other causes we support have actually increased.”

Currently First CRC has started meeting in person again — at a reduced capacity, and with masks and social distancing, etc. — and people are appreciative of that, especially young families, said Van Berkel.

“Folks are definitely tired of all the restrictions,” he said, “. . . but the attitude I’ve experienced has been one of encouragement and grace, despite all the challenges we've faced. God has been good to us.”