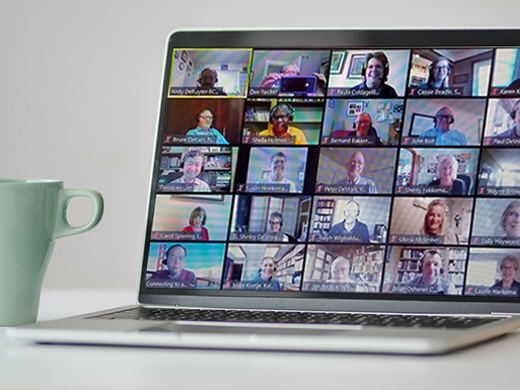 COD member met online for their May 2020 meeting

“We are all here against our wishes,” said Rev. Paul De Vries as he opened the May 2020 meeting of the Council of Delegates (COD).

The COD provides interim governance on behalf of the annual synod of the Christian Reformed Church in North America. Typically the COD meets in person three times a year — in October, February, and May. This time, because of COVID-19 restrictions on travel and group gatherings, the COD held its meeting completely online.

De Vries explained that this was not anyone’s ideal way of gathering for this meeting: “We would desire to be together.”

He noted that there was also some irony about this virtual meeting. When the COD was formed in 2017, synod had requested that it consider doing a virtual meeting at least once per year to save costs and prevent delegates from having to travel from across North America to a central gathering spot.

At its February 2020 meeting, the COD decided to report to synod that it would not have such meetings — partly because it would be difficult to make the meetings work virtually, and partly because gathering together allows for discernment and discussion that the COD felt would not happen well over the internet (Agenda for Synod 2020, pp. 27-28).

“God has a sense of humor,” De Vries concluded, as just three months later the council was forced to conduct its meeting online.

So, over the course of several days, utilizing computers, headsets, and video-conferencing software, the COD managed to conduct its regular business.

Following decisions made at the February COD meeting, this meeting was structured in such a way as to allow greater direction and control by both U.S. and Canadian delegates with regard to their unique countries.

Starting on May 4, then, committees consisting of both Canadian and U.S. delegates processed agenda material together and made recommendations. On the morning of May 6, the committees reported to the full COD with a time for questions and clarification. Then, for the rest of the day, the group split into Canadian- and U.S.-specific corporations to process the recommendations and deal with country-specific business.

On May 7, the full COD gathered in an online session again to hear back from the corporations and to process ecclesiastical matters that the two countries share.

Keeping in mind the geographic areas from which the delegates participated, the full meeting began at 11 a.m Eastern time (8 a.m Pacific), with short breaks after every two hours.

Using technology to allow for a speaker queue and online voting, the process went quite smoothly despite the inability to meet physically together.

Delegates joked about being able to wear sweatpants to the meeting. They also enjoyed getting quick glimpses of each other’s pets, spouses, and children as they popped on-camera from time to time. One delegate even participated from inside his van in his driveway in order to have some privacy from the bustle of family life in his home.

Some of the business the COD dealt with included the following:

While the COD met specifically to deal with business, the virtual meeting was also a time to listen to other CRC members and offer support. Rev. Stanley Jim, for example, was given time to report on the impacts of COVID-19 on communities in Classis Red Mesa. He explained how the high infection rates and lack of supplies have been hurting people both within CRC churches and the broader communities.

World Renew and local congregations are working together with the Navajo Nation to respond.

There were also opportunities to hear from and pray for key denominational leaders such as Colin Watson (acting executive director) and Rev. Darren Roorda (Canadian ministries director).

Typically, many of the decisions of the May COD meeting are forwarded to the CRC’s annual synod for final approval in June. This year, however, synod has been canceled, and the majority of Synod 2020’s agenda has been deferred to Synod 2021.

A few items, however, cannot wait until June 2021 for action. Those matters have been identified by the synodical Program Committee (officers of last year’s synod) and will be dealt with at a special meeting of the COD, which will take place online in June. All decisions to be made by the COD at that special meeting will be subject to ratification by Synod 2021.