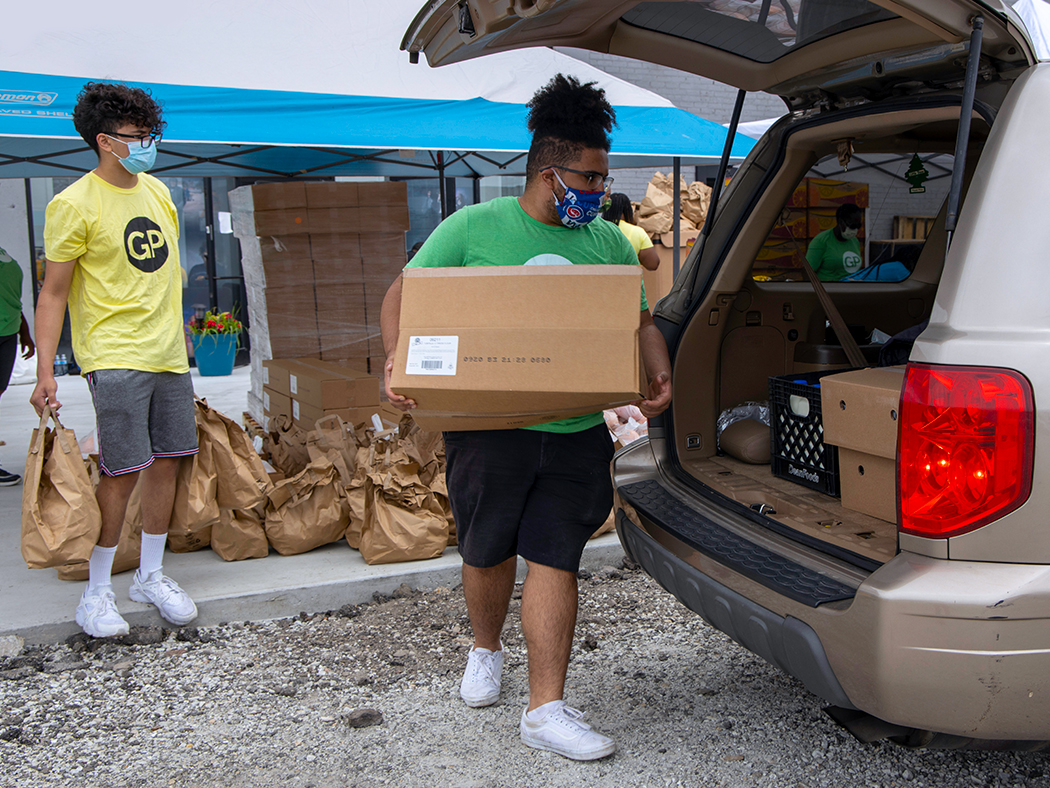 Simply by responding to the needs they have seen around them, these churches have moved forward, building their ministries in different ways — and in the process they are seeing their numbers grow.

As the one-year anniversary of the COVID-19 pandemic arrives, these congregations can look back on the past months and see God’s grace continuing to flow into the lives of the people they serve.

Grace and Peace Community, located in Chicago’s North Austin neighborhood, has not been meeting in person since the pandemic hit.

But in response to a dire need for food for people in the community and beyond, the congregation mustered their resources, linked with other partners, and soon opened a large food pantry, said Preston Hogue, a pastor at the church.

“People had lost their jobs and their incomes, and the floodgates of need just opened,” he said. “People from all walks of life — blue-collar workers, unemployed people, single mothers, even doctors and nurses — have come for food. We have not turned anyone away.”

Over the past 12 months, along with the help of volunteers and with grants from the CRCNA and other organizations, the food pantry has supplied some two million pounds of food to over 500,000 people. They have served about 200 families a day.

“A little bit of heaven has been going on outside as people pull up and we give them boxes of food,” said Angelina Zayas, cofounder and CEO of the congregation’s Gap Community Center.

“We’ve been able to stand in the gap and help those who were being left behind.”

Grace and Peace meets in an 80,000-square-foot former paint factory. While the sanctuary has not been used for worship since COVID-19 arrived, it has been packed with boxes of food donated by several groups, both large and small, and delivered to the loading dock attached to the building.

The church’s website explains: “Our world has been turned upside down by the effects of COVID-19. As a response, we have been required to live very differently than many of us are accustomed to. Individuals, companies, and organizations have had to learn new ways of operating. We have had to adopt a new normal.”

As the food bank has been operating, new people have become interested in Grace and Peace: volunteers, some returning citizens from prison, and people who have come weekly for food have shown interest in the church; they have been touched by receiving the food or in helping to distribute it, and they want to know more about why the church is doing this.

“It is amazing to see how the Holy Spirit has been working,” said Zayas. “It is like we have two churches now. We have a loyal online following, and we have a whole other group of people who are serving and working for the food bank.”

Members of the church have also joined in working at the food bank. As everyone mingles, said Zayas, “we have been able to evangelize and see many people say ‘yes’ to Jesus.”

When the pandemic ends and the church can meet again, the hope is that they will be able to include people associated with the food bank into the congregation on Sundays and for programs during the week.

“Our vision is to serve God and our neighbor, and I think we are accomplishing that,” said Zayas. (See a June 2020 Banner story about the food bank as it began.)

Not long before COVID-19 arrived in New Jersey, Covenant CRC changed the name of its congregation to Rockpoint Community Church, said Jim Bushoven, one of the pastors.

“We really wanted to be seen as a community church, as a bridge to people who live in our area. We handed out t-shirts and mugs and saw an uptick in attendance,” he added.

“It was looking optimistic. We had a campaign going through Lent, but then we were shut down. The first weeks of the pandemic were rough.”

With equipment allowing them to livestream their Sunday worship services, he gathered with two musicians and a sound technician, and they presented worship, he said.

Then, after Easter, they began prerecording the service and presenting it online through July, when they were allowed to open up to 25 percent of their capacity.

As summer unfolded, said Bushoven, they lost some members who left the area to live elsewhere during the pandemic. But slowly new families began to show up, having watched the livestreamed service and sensing that something was going on at Rockpoint, he said.

Currently, the church is limited to a 50 percent capacity and people are required to wear masks.

Having served at the church since 2018, Bushoven credits some additional work he has done in the past few years to offer mental-health and substance-abuse services to the community — and some volunteer activities in the local schools — with sparking additional interest in the church.

Also,  prior to coming to Rockpoint, he had served as a pastor at a large, area nondenominational church, through which he connected with people and congregations in many communities to help prepare for a massive Luis Palau crusade that took place in New York City’s Central Park in 2015.

People knew who he was and, once Covenant CRC transitioned into Rockpoint with a fresh emphasis, and spurred on by the church’s popular summer camp that was already running, people began to take notice.

“As someone put it, it's almost like God took out the old church, brought in a totally new church, and hit the redo/refresh button,” he said.

So, ironically, they were ready, said Bushoven, when the pandemic arrived. Without realizing it, they were in a position to draw more people — hungry for what the Bible has to say — to Rockpoint.

“I think that changing the name and putting up a new sign simply caught people’s attention,” he said. “Families began to see that something new was going on here.”

Several new families have begun coming during this season when other congregations are struggling — and at the same time regular members have been returning.

“They want to come to church and just connect with God,” said Bushoven.”For me, this past year has been stressful. Everyone knows someone who has died from COVID-19. But by the grace of God, it hasn’t hit us too hard.”