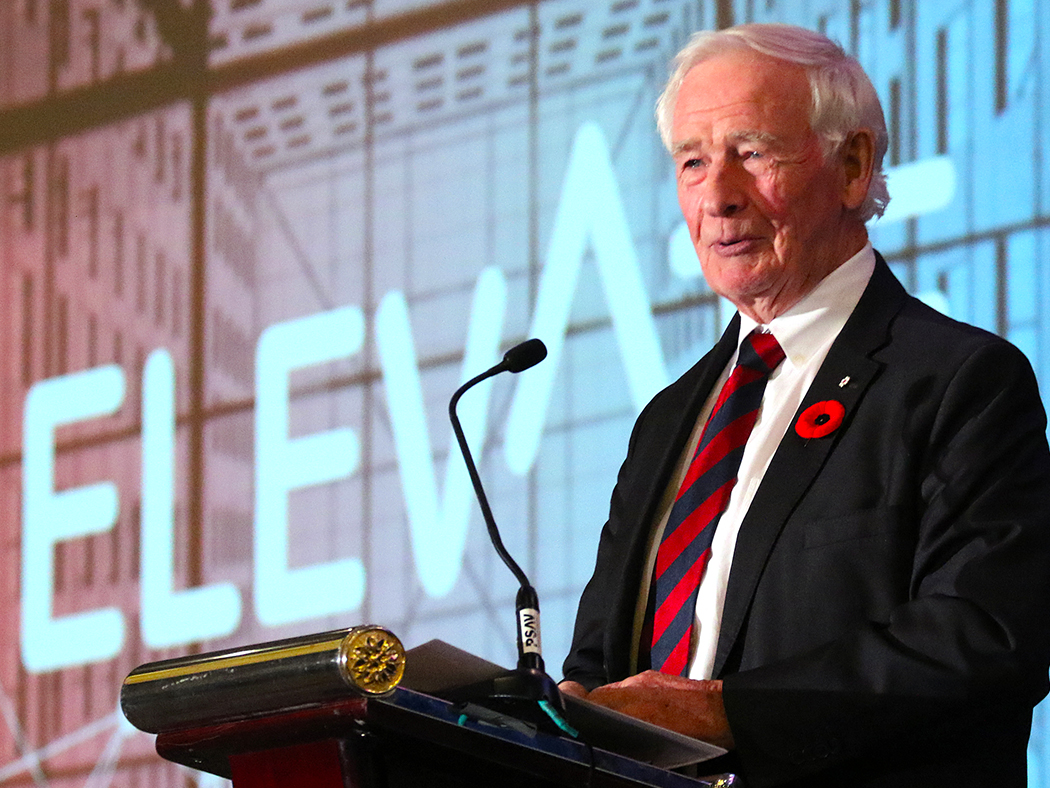 Cardus, an independent Christian think tank known to and supported by many in the Christian Reformed community, celebrated 20 years with a three-day event for supporters and community members.

The event kicked off Thursday, Nov. 11, with a gala in Ottawa, Ont., one of the cities where the research and social commentary organization has an office. Over 220 people were in attendance, with almost 140 others watching online.

The keynote speaker for the gala was the Right Honourable David Johnston, who served as Canada's 28th Governor General, representing Queen Elizabeth at the federal level in Canada from 2010-17. Johnston introduced his speech as a tribute to the queen and spoke on themes of graciousness, duty, and faith.

In describing Queen Elizabeth’s graciousness and hospitality, Johnston recalled a visit he and his wife had made to Balmoral Castle at the start of his official duties. They had brought only formal clothing, so when the queen invited them to spend time at the stables, she also gave Johnston’s wife a pair of her own boots to wear. For an evening’s entertainment, the queen had arranged a visit from a bagpiper and two Canadian highland dancers, a nod to some of the shared culture between Canada and the United Kingdom.

Johnston also reflected on how Queen Elizabeth is a servant leader, sharing power, putting the needs of others ahead of her own, and helping others to reach their potential. Her faith, he noted, can be seen in that servant leadership attitude as well as in her annual Christmas broadcasts.

Following Johnston’s address, Cardus staff reflected on the think tank in a short video. They described Cardus as authentic, persistent, careful, plucky, uncompromising, and friendly, among other things. Asked to relate Cardus’s impact on both staff and society, staff talked about a spirit of collegiality and fun; a leadership that asks not “Whose fault is this?” but “How can we fix this together?” when things go wrong; and a focus on asking important questions and being a faithful presence within Canadian society.

The gala also saw the release of new research data from a partnership between Cardus and the Angus Reid Institute, presented along with a panel discussion about various elements of the data. A major element of the research involved determining attitudes of Canadians under 40 and over 40 years of age on topics such as the legacy of the “Baby Boomers” generation, the future legacy of the “Millennials” generation, education, housing, Indigenous reconciliation, economic inequality, and climate change.

Kurl noted a “chasm” between the views of young people and older people on a variety of social issues including climate, politics, poverty, and housing. Research suggested that almost half of leaders between 18 and 40 see a need to “start new and restructure society differently” as opposed to “building on the achievements of previous generations” or “fixing the past mistakes of previous generations.”

Pennings noted a dissatisfaction among young people with the state of the world, but added that it’s more complex than it seems. He pointed to similarities between today’s young people and young people in the 1960s, a decade of similar civil action, protests, and social experiments.

Sennyah, part of the under-40 age group, reflected that for many young people facing difficult issues such as climate change and rising housing costs, there is a sense of despair that can make it hard to motivate oneself to hope.

Looking at acceptance of faith in the public sphere, research suggested that while young people tend to be suspicious of established religion, they are more open to spirituality and private faith. Sennyah noted that many newcomers to Canada embrace freedom of religion, adding to a growing openness to public faith within Canadian society.

In his closing remarks, Cardus’s Brian Dijkema thanked donors and supporters and expressed a hope that Cardus can continue to do the work of showing that religion as an influence on society is not a liability but an asset.

The celebration continued on Friday and Saturday, with a virtual open house at the Cardus office in Ottawa. Included on Friday were panel discussions on political projections at the federal level and on the cultural impacts of COVID. Saturday’s panel discussions addressed the question “How do we define our current cultural and social moment?” and explored the current housing crisis.

Reflecting on the milestone celebration, Pennings said, “Looking back on the previous 20 years fills me with hope for the next 20. We’ve expanded our reach into several important areas – growing from our roots in the Christian labor movement to pursue a healthy and vibrant vision in a host of other areas, like family, childcare, charities, flourishing neighborhoods and cities, end-of-life care, education, payday loans, and religious freedom. We’ve staked out a place for faith in Canadian common life through our research, but also through our public theology journal Comment and our news-oriented publication Convivium. However, my hope for the future isn’t really based on the rigor of our policy research, the beauty of our publications, or the strength of our staff, necessary as they are. Ultimately, my hope rests on the knowledge that the world has a purpose and that it has been secured by Christ, who is on the throne.”