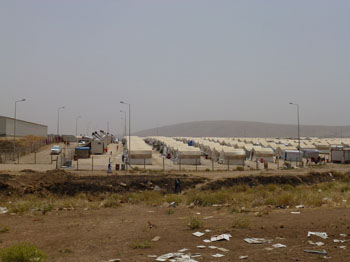 The Canadian government announced recently that it has extended its Syria Emergency Relief matching fund until Feb. 29.

For every dollar donated to qualifying Canadian organizations like World Renew by Feb. 29, the Canadian government will set aside an additional dollar. It will later grant these funds to selected  organizations that are responding in Syria and the neighboring countries.

“The war in Syria has dragged on now for five years and shows no signs of ending. World Renew is blessed to provide essential assistance to thousands for the past three years, but millions of people continue to be in desperate need.

“I hope that these match funds from the Canadian government will encourage even more people to give so that World Renew’s ministry can continue.”

Currently, there are an estimated four million Syrians who have fled for safety in neighbouring countries. Over six million are internally displaced within Syria itself.

Mira (not her real name) is one of them.

When Mira’s husband was coming home from work one day, the bus he was riding was hit by a missile. He escaped with his life, but was paralyzed from the waist down.

As violence continued to escalate, Mira and her husband realized that they had to find a safer place to live. They fled to a coastal city where the violence was less severe.

When the family first arrived in the new city, they stayed with friends for a few days. They soon realized that life would not be easy in this new home. The city was filling with people who had been displaced for their homes in more dangerous areas.

This had put a strain on the city’s infrastructure making life difficult not only for the new arrivals but also for the people who had always lived there. There was steep competition for jobs, apartments, and food.

Mira sold the one piece of jewelry that she had taken with her when they fled – a small bracelet. It gave the family enough money to pay two month’s rent on a small and basic apartment.

A few weeks later, however, her husband’s health began to get worse. He developed gangrene and soon passed away. Mira was now solely responsible for herself and her children.

She found work at a café, but her meager income was not enough to pay the rent let alone purchase food or keep her children in school.

“I had mountains of burdens on my shoulders,” she said.

Through a neighbour, Mira heard about a food assistance project at a local church. The program is funded by World Renew and provides 2,000 vulnerable families with food packages each month.

She went to the church to ask for help and they agreed to visit her family and assess their needs. After this initial visit, staff from the church returned to Mira’s home to give her the family’s first food package. They also told her that she could apply to get assistance for paying her rent.

A few weeks later, the staff visited Mira again. They were pleased to see that the children looked healthier and were back in school. Mira also told them that while her life continued to be difficult, she felt better able to handle the challenges thanks to this crucial support.

To support World Renew’s response to the Syrian Crisis, donate online, by phone or send your gifts marked “Syria Conflict" to: