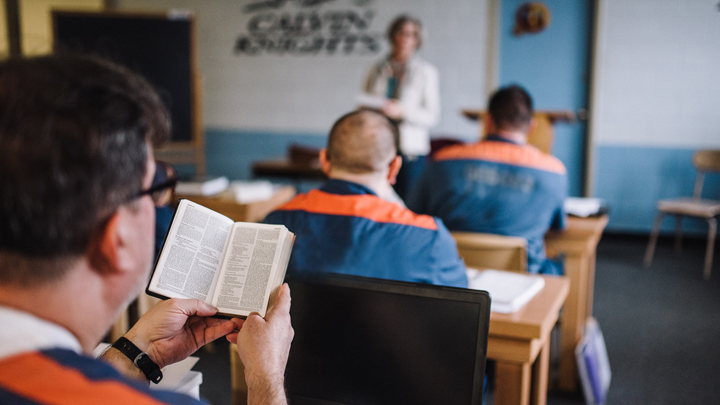 Armondo grew up in a violent home. Most of his family was hooked on drugs or alcohol or both.

Being in that environment, he said, took its toll and played a role in his committing the crime for which he is now serving time at Handlon Correctional Facility in Ionia, Mich.

Not a churchgoer as a young man, Armondo nevertheless had an inkling of faith in God, and that faith had a chance to grow last fall when he enrolled in a new bachelor of arts program in ministry leadership offered at the Handlon Correctional Facility by Calvin College in cooperation with Calvin Theological Seminary.

“I enjoy being part of this program. It gives me the chance to break the perpetual cycle of nonsense you can get into when you are in prison,” Armondo said after a recent convocation ceremony celebrating what is called the Calvin Prison Initiative at Handlon.

“I’ve done bad things and made mistakes. This program is something to keep me occupied and to change my attitude,” said Armondo.

“It is helping us to learn more about God and to be mentors to other guys so we can influence them before they leave here and go home.”

Since September 2015, Armondo and 19 other inmates have attended classes on the Old Testament, philosophy, and beginning-level English three days a week in a special classroom, replete with laptops, Calvin regalia, and a library, in a separate building at the prison.

“When I think of being part of this and take a breath, I feel so much gratitude that it brings me to tears,” said Michael. “You see God’s grace and the Holy Spirit all over this program. God has moved so many mountains to have this happen.”

Other colleges offer courses at Michigan prisons, but this joint effort between Calvin College and Calvin Theological Seminary is unique in the prison system.

Any inmate in one of Michigan’s 31 prisons can apply and, if accepted, will be transferred to Ionia in late summer to start classes in September.

The recent celebration, held in a large room near the visiting area, served as a convocation that offered prayers and music from the “Handlon Tabernacle Choir” and gave those involved in the initiative the chance to discuss its purpose and history.

“We have the mission to equip our students to use their gifts from God wherever they are and are called to be. I’m deeply honored to be able to offer a Calvin degree at this institution.”

“You are the beginning, showing the way for others,” he told the students who are now members of the Calvin College class of 2020. “You are people in whom God is working. . . . Continue to know you are called to serve to be equipped and educated to be servant leaders.”

A key figure in this initiative, John Rottman, professor of preaching at Calvin Seminary, gave the convocation address. He reflected on how his involvement began in October 2010 when he took some students to the Louisiana State Penitentiary in Angola.

They went to Angola, once known as one of the “bloodiest” prisons in the U.S., to learn more about and to participate in the education program offered at the facility by New Orleans Baptist Theological Seminary.

Among other things, said Rottman, they learned that the program, along with several congregations led by inmate pastors in Angola, had helped cut the rate of violence in the prison by 75 percent.

“That week at Angola changed my life,” said Rottman. “I taught, [and I] visited death row and the hospice. We had worship. I saw the prison in its totality and saw how there were moral reforms as a result of the program with the Baptist seminary.”

On the way back from that trip, he said, he and the students wondered if a similar program could be launched in Michigan, but one of the students, a former prison inmate, said there was no way it could happen in Michigan.

However, in the spring of 2011, some inmates at Handlon wrote the seminary a letter, asking if they could start a program there, said Rottman.

Ronald Feenstra, academic dean at the seminary, looked into it and approached Dan Heyns, director of the Michigan Department of Corrections, who was familiar with Calvin. Heyns eventually recommended that the warden at Handlon allow the seminary to start offering a class on Tuesday nights at the prison.

After that, Heyns and the chair of the Calvin Seminary board and others visited Angola and came away wondering if a similar program could be offered at Handlon.

Meanwhile, David Rylaarsdam, professor of historical theology at the seminary, put together a proposal for a bachelor’s degree in ministry leadership and approached Calvin College to join in and seek accreditation for the initiative, said Rottman.

From there, once accreditation was in place and with a go-ahead from the prison system, everything fell into place. Besides offering a bachelor of arts degree, inmates also have the chance to earn a certificate or an associate degree in ministry leadership.

“Today, we are celebrating the first year of a fully accredited program here at Handlon,” said Rottman. “What started as a pipe dream is now a reality because the Michigan Department of Corrections was willing to take a chance.”

The program, he added, offers the inmate-students “possibilities of deep and lasting change, which prompts us to gratitude that the people here will no longer be seen by the worst things they have done.”

Following Rottman’s address were songs performed by inmates making up the Handlon Tabernacle Choir. Prison officials then spoke also. After that, inmates showed a video they had made, featuring photos of themselves and their friends and families from the days before they were placed behind bars.

In the video, they admitted in a caption that they had failed those who loved them. “In our moment of weakness we chose the wrong path and lost our way,” they said.

As the final images of their former lives showed on the screen in the room, they said, “We are human beings, and, because of your love and support, we are hopeful, encouraged, inspired, and redeemed, and one day we will be world-changers. Thank you, Calvin College.”