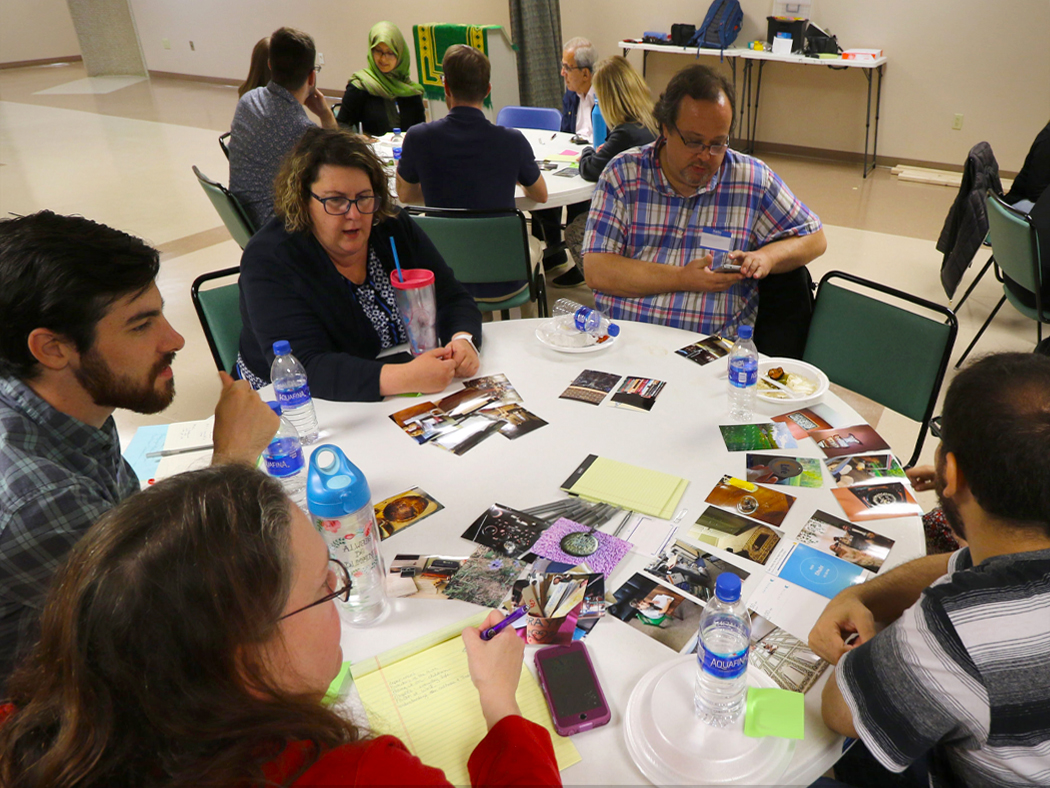 A meeting of the minds and hearts between Christians and Muslims was a main theme of a Journeys into Friendship consultation sponsored by Resonate Global Mission June 21-22.

Tim Harris, a speaker at the event, has worked, along with his wife, Miriam, for several years building friendships and, when appropriate, sharing their Christian faith with Muslims in North America and around the world.

Also on the agenda was sociologist Roman Williams, who has developed an organization called Interfaith Photovoice in which Christians and those of other religions take photos on their cell phones and gather to discuss these images.

Journeys into Friendship (J2F) is a network for people involved in leading and supporting ministry to diaspora communities — people who have left their homelands — both globally and locally.

Besides hearing from Harris and Williams, the consultation addressed supporting new American neighbors and racial reconciliation in Chicago. Additionally, each session included worship.

“We discussed how to love our neighbor, including our Muslim neighbor, our neighbor of another race or ethnic background, and our neighbor who is a new American or Canadian,” said Greg Sinclair, diaspora ministry leader who works with Resonate Global Mission.

They had originally hoped to meet in person at Trinity Christian College in Palos Heights, Ill, Sinclair said, “but caution around COVID-19 called for one more virtual conference. It came together well because the videos were well done, and it all streamed nicely.”

Tim and Miriam Harris recently published Loving Your Muslim Neighbor, a book that draws from their 13 years of ministry experience among Muslims.

At the consultation, Tim Harris shared a few stories describing their ministry. For instance, there was a young man he got to know who came from Iran to earn a master’s degree in business in the United States.

“Back in Iran, he thought God was hostile, and he walked away from that,” said Harris. “However, he was searching, and, after I got to know him, I began to hold a Bible study at a McDonalds with him.”

Eventually, after two years of learning about Jesus and Christianity, the graduate student decided to be baptized. “He wanted Jesus in his life, and we baptized him by immersion right in church,” said Harris.

There was also an older man from southern Iraq who had been imprisoned by Saddam Hussein. “He came here as a refugee. He wanted to come to the U.S. because the U.S. had set his people free,” said Harris.

Harris said he had discussions with the man for four years, and “in the fourth year he began to believe what we share.”

When they first began to talk, they would discuss “how God loves the world. When God entered his heart, the man took it to heart and realized God also loves him,” said Harris.

But the man began having kidney trouble and returned to Iraq, where his health faltered. “I talked to him in the hospital, and he quoted a Bible verse to me,” said Harris.

In their book the Harrises talk about the significance of learning how to share your faith with Muslims, who have been moving to North America for various reasons.

“The question is, How are we going to respond to this large influx of Muslim people who have now become our neighbors? . . . Will we be like Jesus? Will we be like the One who came to seek and to save what is lost?

In their work, said Tim Harris, they never push a person to become a Christian. “You have to be patient,” he said. “You have to realize when you start investing in the life of a Muslim, it is not for the faint of heart. . . . We believe that if a person comes one more step toward Jesus, it is a success.”

Using a technique called Photovoice, Roman Williams finds that snapping photos on your cell phone and then sharing and discussing them with one another can be a helpful way to break down barriers in a local church and can also be used to open paths for dialogue between people of different faiths.

Typically, said Williams, interfaith dialogue happens in a space in which religious leaders offer perspectives from their tradition on a common topic. While these dialogues are important, “too often the opportunity for audience members to build relationships across religious differences is not part of the program,” he said.

And this is where Interfaith Photovoice — which is a relational and not evangelistic tool — comes in.

“Interfaith Photovoice,” he said, “is a way to use photos to have conversations over cultural and religious differences. This effort brings people together.”

Speaking online at the Journeys into Friendship consultation, Williams shared stories of how Interfaith Photovoice can have an effect on someone.

Emma was part of one of his first Interfaith Photovoice efforts, for example. In sharing her photos and looking at the photos of others, including Muslims, she began to see challenges that Muslims face when they arrive in the U.S. She realized that clothes in shopping malls do not necessarily meet Muslim standards of modesty. Similarly, it was hard for Muslims to find food, especially halal meat, to eat.

As Emma sat around a table with others and everyone shared their photos, said Williams, “she was confronted with a new perspective. She grew.”

Kathy, a Christian, took a photo of a sunset, and so did one of the Muslim women in her group. Both said they were reminded of the beauty you can see in God’s creation. “They both realized that they look toward God when they look at nature,” said Williams.

One Muslim man, said Williams, took a photo of books in a university library. The man shared that this photo symbolized the fact that the library had no Quran, the holy book of Islam, on it shelves.

With help from Williams, the J2F network participated in an online Interfaith Photovoice project in Chicago. Ruth Kelder, a mission leader for Resonate Global Mission, played a role in bringing the project to the area.

She also took photos — of rocks in Arizona — and pointed out another way “we experience God in creation,” she said. “When we share Bible verses and verses from the Quran, we also learn that there are similar [teachings in both about] creation.”

Taking part in the Chicago Photovoice project, Megan Ribbens, a Resonate missionary, said she was reminded “in deep ways that we can’t love our neighbor unless we know our neighbor — and not just our neighbor across the street. . . . Photovoice helps [me] to humanize people who are different from me.”