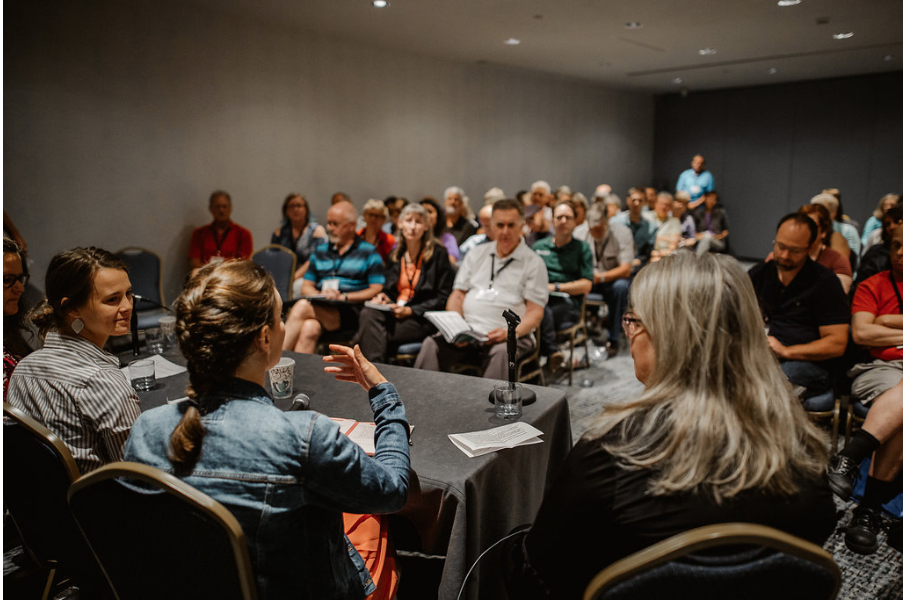 People interact at one of the 66 break out sessions.

During one of the many breakout sessions at Inspire 2017, Mark VanAndel and Nate Bull spoke about their ministry center in a refurbished home in a Detroit neighborhood that was once a thriving community of automobile workers but is now a wasteland of poverty and crime.

In another session, Karen Wilk spoke of a neighborhood ministry she has developed in Edmonton, Alta., that works one-on-one with neighbors and draws people into living rooms and kitchens, and not necessarily to Sunday services at church, for times of prayer and praise.

And during “Your Church Online,” Christopher Hunt, marketing and communications manager for Reframe Media, and Brian Daley from Church Juice — both ministries of Back to God Ministries International — offered a practical session on how to improve your church's presence online.

In all, 66 breakout sessions were held during Inspire 2017, catering to the many tastes and interests of Inspire attendees. For the most part, all 66 sessions were geared toward helping Inspire participants rethink how to do ministry in a time when cell phones are everywhere, the idea of “truth” is constantly questioned, and Bibles are too often relegated, untouched, to a shelf or the back of a pew.

“We need a different kind of leadership in our churches today because of the problems in our culture,” said Chris DeVos in his session titled “Outfitting for Leadership off the Map.”

“So many changes are coming at us through the portals of life,” said DeVos, director of the Ridder Institute for Church Renewal at Western Seminary in Holland, Mich. “We need to see that the number of minorities are growing and that established churches are losing market share at supersonic speed.”

Among this group are young adults whose religious habits were addressed at "A Love-Hate Relationship with the Church: Ministering to Young Adults Today." It was hosted by Matt Ackerman and panelists Tyler Helfers, Brenda Kronemeijer-Heyink, and Jamie VanderBerg — all of whom are campus chaplains.

They started by giving some U.S. and Canadian statistics about young adults.

In Canada, Jamie VanderBerg pointed out, there are statistical differences in comparison to the situation in the U.S. Church attendance, for example, is even less than in the U.S. across the board, with only 23 percent attending church in Canada on a monthly basis.

He also explained that this number is not declining as much as we thought it might, because of Canada’s high levels of immigration.

Despite this decline in formal church attendance, many young people still consider themselves "spiritual," a term that may be hard to define and yet also seems to imply young people are seeking an experience of God.

"Churches need to create a space to ask questions and have conversations," said VanderBerg. He also pointed out that many young people are very missional and want to get actively involved in service to others at home or beyond.

They are "hungering to get into the community," he said. "We are uniquely positioned to meet the needs of that particular aspect of the church."

Tyler Helfers agreed, adding, "We have a tendency to underestimate young adults." He pointed out that they tend to want depth: “Deep-rootedness. Deep engagement. A deep sense of belonging."

"Young adults are not antireligious; they have a lot of questions," said Helfers. "We want to push them toward deeper engagement."

VanderBerg ended the session by saying that young adults "could have a huge influence on the church as a whole if we just opened the door for them."

Other sessions addressed including people with disabilities in church life; kindling a life of prayer within each of us; methods for churches to use in discipling members through different stages of life; and how churches can manage conflict through the use of restorative practices — a set of tools to build relationships, have tough conversations, and restore harmony.

In “Joining God’s Mission in the Neighborhood,” Mark Van Andel and Nate Bull talked about the loving mercies of providing a shower to those who need to wash up, a washer and dryer for those who need to clean their clothes, and free wifi for young people living in an area where few can afford access to the Internet.

These are just some of the outreach efforts they offer to people living in the Brightmoor neighborhood of Detroit, an area pocked by unrelenting poverty and crime. People come to their ministry center, a refurbished residence, at all hours for food, shoes for their feet, or a chance for Bible study or quiet, confidential conversation.

“We believe the incarnation of Jesus is the key impulse to think about when we are witnessing for Christ,” said VanAndel, a CRC pastor who is also affiliated with Citadel of Faith Covenant Church, also located in Detroit.

Bull is a Reformed Church in America pastor who oversees inner-city ministries in Benton Harbor and Kalamazoo, Mich., as well as serving in Detroit with VanAndel.

During the session he said church is about doing, especially among “the least of these,” and acting out the love of God that comes to his people through Christ.

“We didn’t come down to Detroit to open a church. We believe we have to be the church before we are a church,” said Bull.

For one thing, he added, “If we did that, if we right off built a church, we’d hardly reach anyone because people don’t go to church anymore.

But action is only part of it, said Bull.

“We need to pray intercessory prayer for the people who are in our groups. This is more important than we ever, ever thought. We have prayed for people, and the results have been tangible.”

Karen Wilk, in her session titled “From Pew to Neighbourhood,” told people to start thinking of an expanded version of church. Sunday morning worship is only part — and an increasingly smaller part — of it, she said.

In giving this message, she echoed much of what others said in Inspire sessions. The time has long passed when the CRC can limit itself to its own corner of the world.

“We know that all of the world belongs to God. But God doesn’t limit his work to the church,” she said. “We believe God is already at work in the world, and the question is, ‘How can we discover where that is happening?’”