Breaking the Idols of Our Time 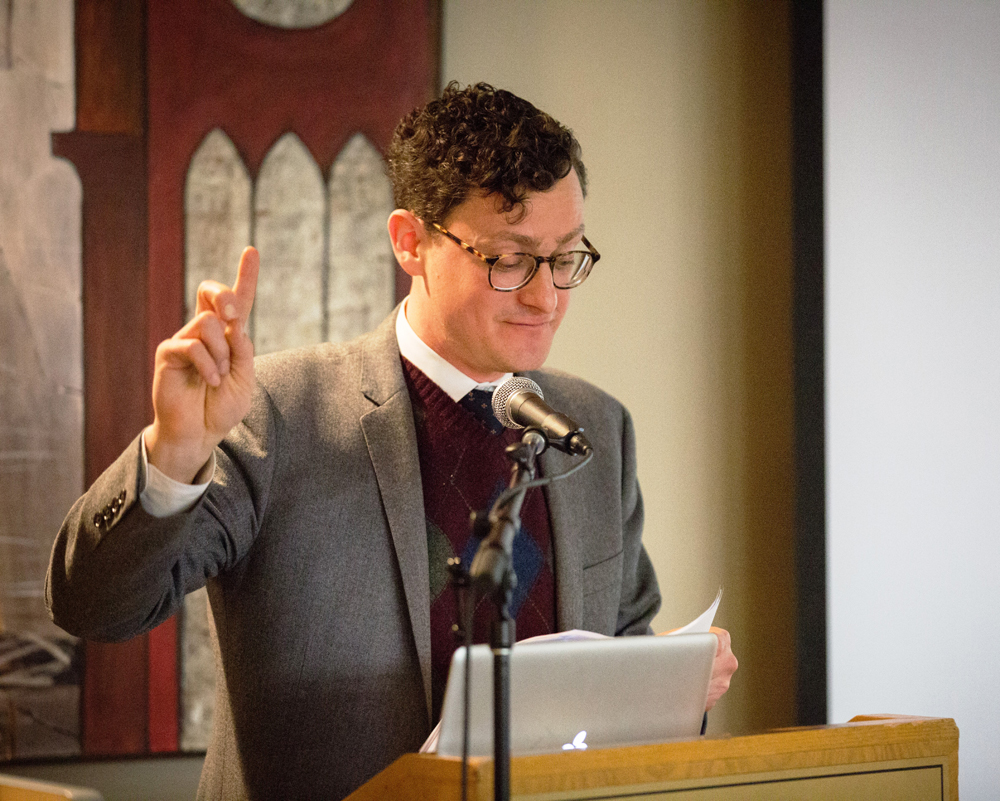 An art historian is not usually someone who rejects images.

However, in a lecture delivered to a packed room at Redeemer University College in Ancaster, Ont., on Jan. 25, Matthew Milliner, a professor of art history at Wheaton College, did just that.

While Milliner didn’t dismiss all images, he explained the need to reject many of the icons and idols of today’s culture – the “glittering images” in consumer advertising – and to present an alternate visual order in our lives and churches, a beauty that draws people to Christ.

Milliner delivered the lecture as part of Redeemer’s The World and Our Calling series. He was also there to accept the 2016 Emerging Public Intellectual Award from the Redeemer Centre for Christian Scholarship.

During his lecture, Milliner talked about the book of Daniel and how Daniel’s three friends – Shadrach, Meshach, and Abednego – refused to bow to the image set up by Nebuchadnezzar in Babylon while Israel lived in exile (Dan. 3).

“Do we live in that kind of Babylon today?” he asked. “Some people say we . . . are ruled by what influences our eyes. It’s not just Times Square, of course. In Canada, it would be Yonge and Dundas – by the Eaton Centre – where people gather to see the glittering images. . . .”

Milliner compared religious images from the past to the images featured in contemporary media and marketing. In traditional Orthodox theology, he explained, there was a screen of icons and religious paintings that separated the nave from the sanctuary of the church. This screen is known as iconostasis and was intended to “foster mystic sweet communion with those whose rest is won.”

“Rightfully understood, we should want to become one of those saints ourselves,” Milliner said about the purpose of iconostasis, before pointing out that when he was in places like Times Square or the Eaton Centre, “I realized there that I was witnessing secular iconostasis.”

Through lifestyle, art, academics, and protest, many movements have come and gone, Milliner said, each trying to expose and escape the materialism of Western culture. In time, however, each of these movements became an alternate form of materialism.

He suggested that churches can offer an answer to this concern by being the “voice from without,” challenging the icons and idols of consumerist culture.

“This isn’t at all to endorse the actual breaking of images – that’s far too easy. As the captives of Israel were marched through the Ishtar gate [into Babylon], they’d have been killed if they had foolishly attempted to scratch the eyes off of the animals and dragons,” he said.

“Babylonian captivity was a time when Israelites didn’t have the power to break images, so they had to break them rhetorically instead. That’s what we’re talking about here,” he explained.

Pointing to St. Anne’s Anglican Church in downtown Toronto as an example of a church that contains beautiful, sacred imagery, Milliner suggested that Christians can challenge the dominant images of culture by creating and displaying an alternate culture of beauty that draws people not to buy or try to become the images portrayed in advertising and media, but by drawing people to find rest in God and his community.