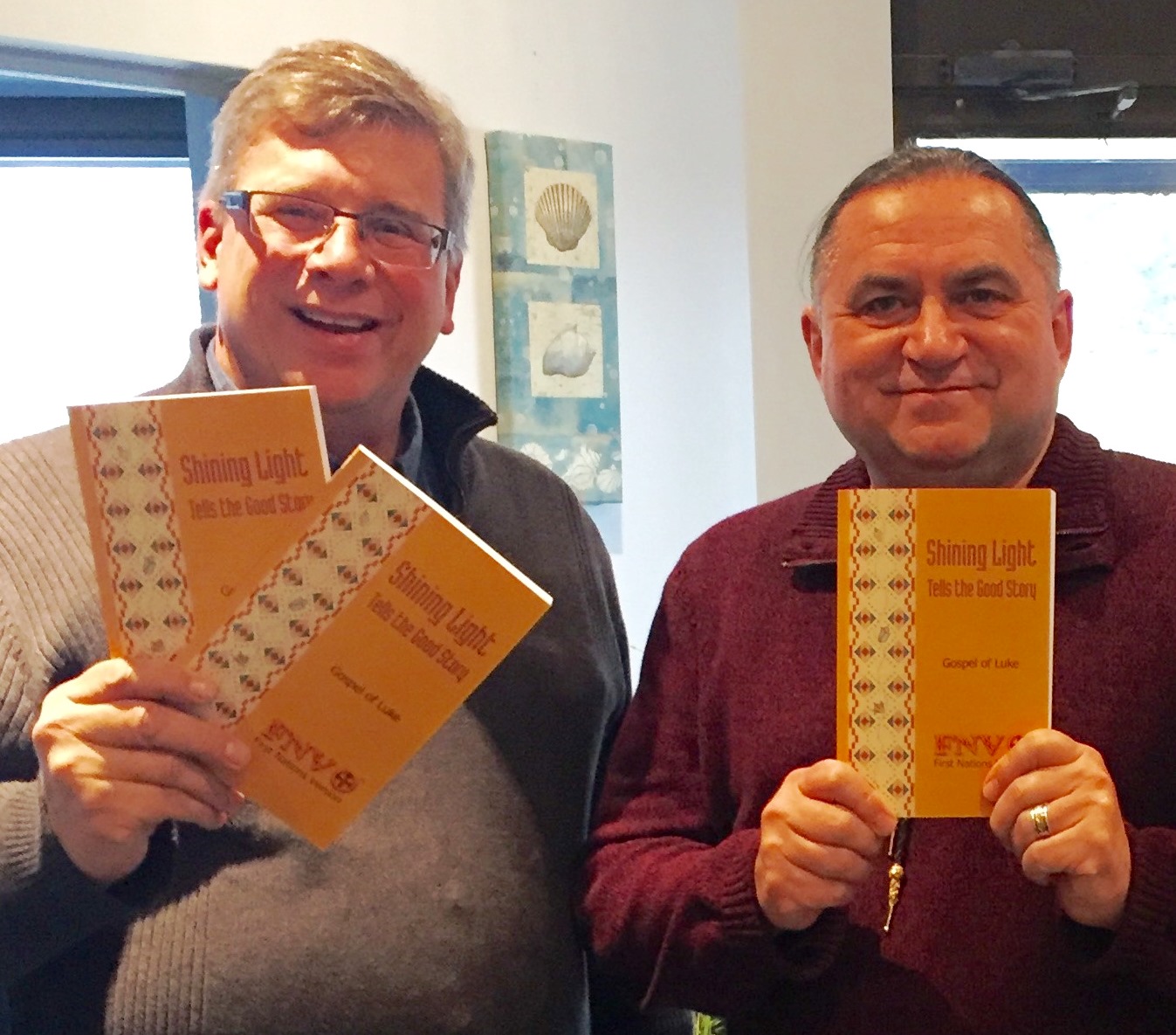 Terry Wildman, right, and Wayne Johnson celebrate the printing of the First Nations Version of the Gospel of Luke.

One reason for Bible translation is to get God’s Word to people in every language and people group in their heart language.

Translators will spend years translating the Bible and promoting literacy in minority language groups worldwide, so that people can study and understand the salvation story at a this level — in their hearts.

That is also the goal for a new English-to-English translation within North America.

About 20 people learned about this project, the First Nations Version New Testament, at a lunchtime event at Faith CRC in Burlington, Ontario.

The First Nations Version is an ongoing project of Rain Ministries, headed by Terry Wildman, in partnership with the translation ministry OneBook.

Wildman, a First Nations pastor and musician, started the project three years ago in response to a need he found while pastoring and doing a traveling ministry with his wife among First Nations people.

Because of this, he led Bible studies in English. In a Hopi jail ministry, he noted that “many guys struggled with even the NIV – they struggled relating to it…not so much understanding, but relating.”

He started looking for a version of the Bible that would speak in the style and patterns of the Native languages. Not finding any, he began to do some work, starting with passages like Psalm 23 and verses from the New Testament.

“I found that as I spoke it and rephrased it, there was a lot more receptivity,” he said. “People began to say, ‘I wish there was a Bible like that.’”

He created When the Great Spirit Walked Among Us, a combination of the four gospels into one narrative, and many missionaries started to use it in their work on reservations. The book tells the story of Jesus, with accounts taken from all four gospels and woven into one single story, using language that First Nations people can relate to.

Eventually, the work came to the attention of Wayne Johnson, president and CEO of OneBook, who contacted Wildman about working with him to create a complete New Testament. “My first thought was, ‘That’s exactly what I’ve been hoping for’,” said Wildman.

Today, the Gospel of Luke has been drafted and sent out for use and review across North America, and a team of about 15 translators from various tribes and denominations is working on the rest of the New Testament.

John den Otter of Faith CRC in Burlington, Ontario, was one of the founders of OneBook and remains heavily involved in the work.

Sid Dykstra of River Park CRC in Calgary was on the board of OneBook when the decision was made to partner in the translation project. “It’s different because it’s English to English. But in the end, it’s about Bible translation and community transformation.”

This rephrased passage from 2 Corinthians 5 explains their hope and their reason for taking on this project: “All who are joined together with the Chosen One are now part of a new creation—for in him the old creation has faded away, and a new creation has been birthed.

“It is the Great Spirit himself who has done this! Through the Chosen One, Creator has removed the hostility between human beings and himself, bringing all creation into harmony once again. Creator has chosen us to represent him in this great task of helping others find this path.”

To compare this passage with the NIV translation, click here.