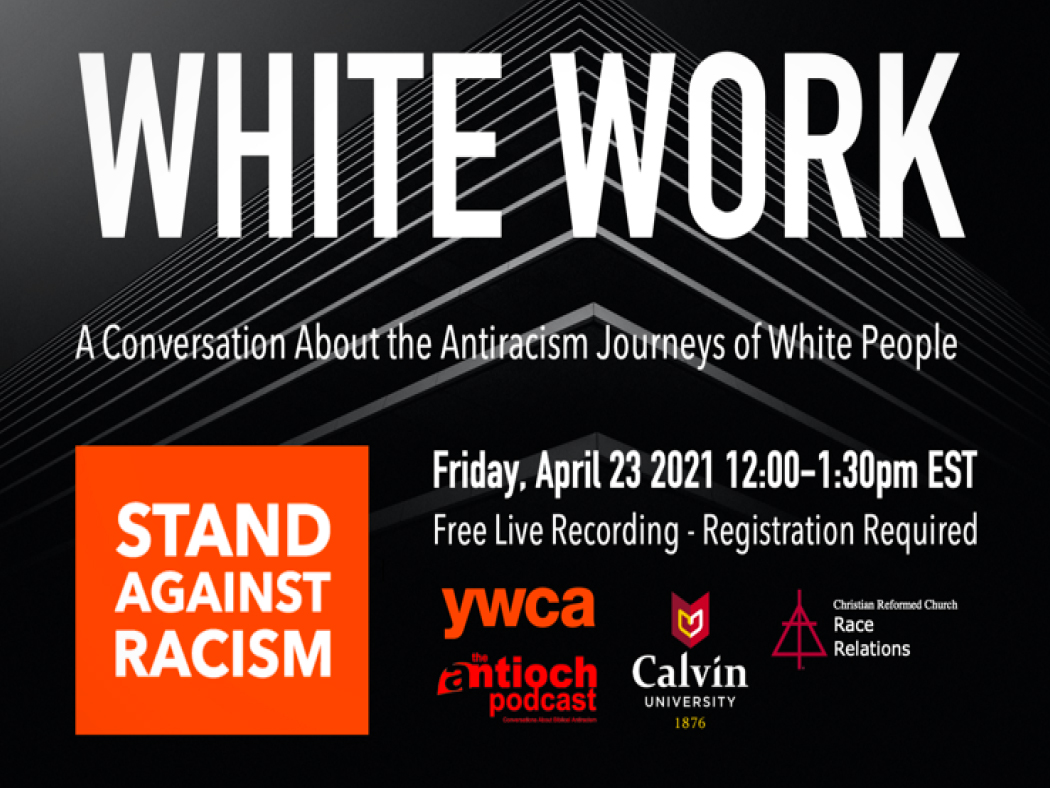 Two moderators and a five-person panel recently met on Zoom to discuss the challenges white people face in the fight against racism.

Also sponsoring the event in West Michigan were the local YWCA, the Antioch Podcast, Calvin University, and the Christian Reformed Church in North America’s Office of Race Relations.

“The question today is ‘How are we doing? What’s on our minds? In one word, how do you feel as a white person doing antiracism work right now?’” asked Michelle Loyd-Paige of the panel.

Loyd-Paige, executive associate to the president at Calvin University for diversity and inclusion, moderated the discussion along with Reggie Smith, director of the CRCNA’s diversity office.

In answering Loyd-Paige’s question, the panelists said that right now — during a time of protests against police shootings of black people — they feel “weary,” “depleted,” “determined,” “vulnerable,” and yet, despite all of the unrests, one person answered: “cautiously convicted.”

As the discussion went on, the panel also told the moderators that being white and joining the fight against racism can mean you’ll lose friends, even jobs; that you will be involved in a grueling uphill battle; and that you will need to check yourself and your motivations every step of the way. Breaking down the walls of racism, even inside yourself, is hard, long term work.

Included on the panel were Stacia Hoeksema, an associate professor of social work at Calvin; Libby Huizenga, a Calvin Seminary graduate and research librarian at Kuyper College in Grand Rapids, Mich.; Eric Nykamp, producer of the Antioch Podcast; Joseph Kuilema, who also teaches social work at Calvin; and Melissa Stek, a race relations consultant who worked for a time for the CRCNA’s Office of Social Justice.

Early in the discussion Smith asked: “What are your thoughts on how faith has shaped your journey to stand against racism, and what are some of the hard lessons you have learned along the way?”

Kuilema started off by saying that everyone carried the verdict in the George Floyd case “and the complicated ways people are dealing with it” into the conversation. Last week, former Minneapolis police officer, Derek Chauvin, was convicted by a jury in the murder of Floyd.

Kuilema said his entry into the reality of antiracism work goes back several years — and especially to a time when two young people who were black and whom he had come to know were shot and killed — one as he was getting on a bus, and the other as he was walking down an alley.

“I’ve tried hard to understand what happened to them and why,” he said.

As a social work professor, he added, he is aware that being a white male probably helped him to get the job he has. A social and economic system is in place in which, he said, black people are often left behind, simply because of the color of their skin.

Hoeksema said that growing up and attending school with many Native Americans at Rehoboth, a Christian school with strong CRCNA ties in Rehoboth, N.Mex., was an experience that shaped her in many ways. “A seed was planted to see the world cross-culturally,” she said.

But even though she has a wider perspective, Hoeksema said she has to work hard, delving into her own heart to keep herself as clear as possible on the reality of what it takes to try to eradicate racism.

In doing this, she said, and the others agreed, she can and does run into people who find her openness to people of other races troubling. “Seeing things through an antiracism lens can be costly,” she said.

Stek said she has lost relationships and even a job because of her views on racism. “The consequences of standing against racism can be harsh. . . . There is loneliness in doing this work.”

Huizenga stated that while she has also lost things because of counting herself to be a strong ally of black people, and that that advocacy has been hard on her, “the cost is minimal” compared to what others have been through.

Eric Nykamp, producer of the Antioch Podcast, which focuses on race relations, said he recently ran into problems as a result of his views on racism. Painful as that was, he said, “I am trying to be the person God wants me to be — even if I don’t fit into the broader culture.”

In his experience, Nykamp said, the Christian church has a long way to go in order to rid itself of the sin of racism, a sin deeply rooted in the consciousness of a world filled with barriers and brokenness — a world dividing races into categories and into limited ways of living.

“Racism is evil, and we need to bring our Christianity against it,” Nykamp said. “But unless we are able to change Christianity at the roots, we won’t make strides. . . . As soon as you step out and preach on this, the hammer comes down.”

As he looks at the process of fighting racism, Nykamp said it is important “to accept yourself as a white person, made in the image of God and given certain tools to live life.”

An important part of ridding oneself of racism, all of the panelists agreed, is to be kind to yourself but to keep at it, to build friendships with people different from yourself, and to find others with whom you can speak about this journey.

“It is spiritual recovery work,” said Hoeksema. “In antiracism work . . . it is about realizing how the system has shaped me. . . .”

It is also about “learning to really listen deeply to what people of color might be saying — and then finding ways to amplify those voices.”

Kuilema added, “Resist the temptation to jump in and fix things. . . . Slow down, listen, and try to understand. You can’t do this overnight.”