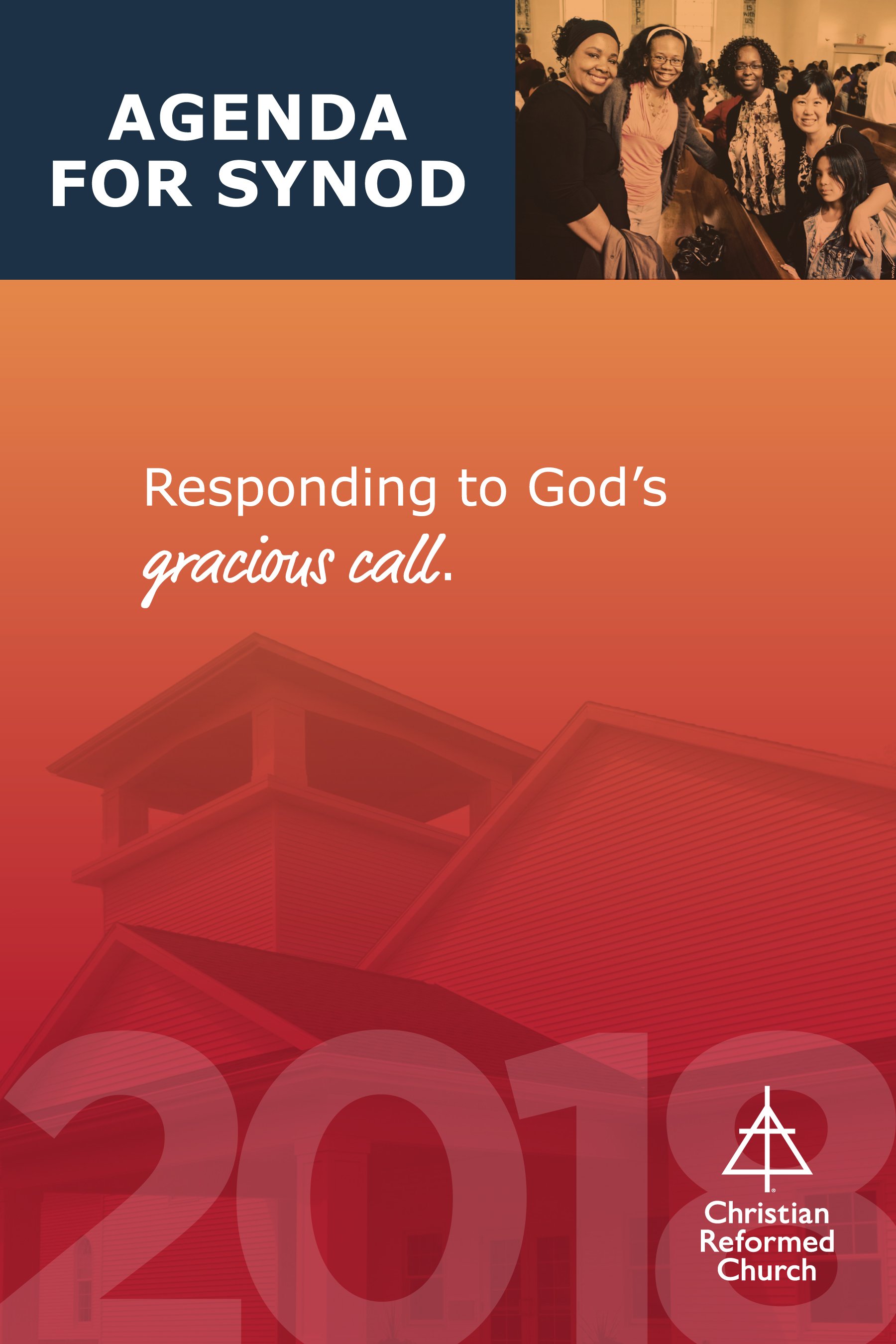 Illustrating its ongoing collaboration with the Reformed Church in America (RCA), the Christian Reformed Church in North America will convene Synod 2018 at 7 p.m. on Thursday, June 7, in the Calvin College Chapel with a special joint worship service including delegates to the RCA General Synod 2018.

In another show of unity, the RCA General Synod is meeting concurrently on the campus of Calvin College from June 7-12, while the CRC synod runs June 7-14. The concurrent meetings follow up on the denominations’ joint resolution, made in 2014 while the CRC and RCA met in concurrent synods on the campus of Central College in Pella, Iowa, to  “act together in all matters except those in which deep differences of conviction compel [us] to act separately.”

During the weekend and through Monday morning, June 11, “the RCA and CRC assemblies will join for times of worship, joint advisory committee meetings, workshops, and plenary sessions to engage in and learn about their collaborative ministry,” writes Steven R. Timmermans, executive director of the Christian Reformed Church in North America, in the Agenda for Synod 2018, now available online.

In addition, a community-wide Synodical Worship Service, planned by a joint committee of the RCA and the CRC, will take place at 7 p.m. on Sunday, June 10, at the DeVos Center for Arts and Worship at Grand Rapids Christian High School, 2300 Plymouth Ave. SE, Grand Rapids.

The CRC synod will officially open for business on Friday morning, June 8, in the Calvin College Covenant Fine Arts Center, where all CRC plenary meetings will be held.

On the agenda for Synod 2018 are a range of issues and overtures related to declining church membership, speaking out on political and social issues, classis renewal, and the effectiveness and value of various church ministries.

Here is a breakdown of these and other matters that will go before Synod 2018:

Council of Delegates: An update on the Council of Delegates (COD) of the Christian Reformed Church in North America, which replaces the former Board of Trustees. The COD held its inaugural meeting in October 2017, gathering delegates representing classes, with additional at-large members, to address the mission and ministry of the CRCNA on behalf of synod.

Diversity: At the instruction of Synod 2013 each CRC agency, Calvin College, and Calvin Theological Seminary have been asked to submit to the executive director a report on how they have been doing, as part of their strategic plan, in reaching their diversity goals and timelines in their leadership, administrative, and regional ministry teams. In receiving this year’s annual report, the COD noted that while there has been progress, the church needs to keep working to increase diversity in leadership, on boards, and at other levels.

Classis renewal: Synod 2015 directed the executive director to “appoint and resource a working group (Classis Renewal Group) to build on the work of the existing Classis Renewal Ministry Team, including an examination of the nature, scope, and purpose of classes, with the objective of boldly exploring and innovatively addressing revisions to structures and to the Church Order that will enable classes to flourish” (Acts of Synod 2015, p. 680). The Classis Renewal Group has been at work studying the role of and considering changes to classes in the CRCNA. The COD reviewed the final report in February and is forwarding the report to synod for its consideration.

Programs and ministries: Synod 2016 instructed the Board of Trustees of the CRCNA “to evaluate and prioritize all existing programs and ministries with the goal of reducing the institutional footprint” (Acts of Synod 2016, p. 858). Synod 2017 received an update on the process, and delegates had the chance to offer their impressions of each ministry’s value by completing a survey prior to synod. Delegates also participated in an exercise during synod that generated data to produce a final analysis.The results reported in this year’s agenda show that all CRC ministries and programs, to a varying extent, are considered valuable. At its February 2018 meeting, the Council of Delegates finalized its report and has now submitted it with recommendations to Synod 2018.

Evangelism, congregational renewal, and church planting: A team of Resonate Global Mission and Calvin Theological Seminary staff, in consultation with Back to God Ministries International leaders, addressed the main focus of the Synod 2017 recommendation “to make available a list of current denominational resources related to church renewal, including church planting with emphasis on training for evangelism.” Received by the COD in February and now recommended to synod is a report providing a biblical theology for church planting and evangelism, addressing contemporary contexts, and providing a list of resources and tools.

Overtures:
Classis Zeeland asks Synod 2018 to commission the denomination’s seminary, Calvin Theological Seminary, in cooperation with Faith Formation Ministries, to create a series of instructional, devotional, and interactive pieces for churches, families, and individuals to be reminded of and taught in a new way the doctrines of grace as summarized for us in the Canons of Dort (TULIP).

Classis Illiana asks Synod 2018 to establish a fund to assist immigrant churches that are affiliating with the CRC. The fund would be used to assist with the expenses of these immigrant churches. The fund would also be used for assisting classes to provide transitional and relocation expenses to immigrant religious workers, administrative expenses associated with immigration requests, and offsets to immigration lawyer expenses to provide immigrant pastors as needed. In another overture, Classis Atlantic Northeast asks synod to establish a fund for similar purposes.

Two overtures — one from Classis Minnkota and one from Classis Columbia — ask synod to halt CRC agencies and ministries from engaging in political advocacy. Meanwhile, Classis B.C. South-East calls for synod to foster discussion and education on what the Bible instructs about speaking out on public matters.

Seven overtures are from classes seeking approval for congregations to move their membership from one classis to another.

Classis Pacific Northwest asks synod to address declining membership in the CRC, which the overture contends is largely a result of years of various conflicts between CRC congregations, classes, and ministries.

An individual in the state of Washington asks Synod 2018 to increase awareness of the imbalance of power that some church leaders use by abusing others. This, says the overture, results “in the betrayal of a sacred trust given to church leaders that causes harm to the church.” The overture offers recommendations to address abuse of power.

In the preface to the Agenda for Synod 2018, Timmermans asks Christian Reformed Church in North America congregations to remember the synodical assembly in intercessory prayers on the Sundays of June 3 and 10:

“Let us pray that the Holy Spirit will equip the synodical delegates to serve in faith and obedience and will lead the Christian Reformed Church in unity, growth, and renewal.

“May Synod 2018 ‘equip his people for works of service, so that the body of Christ may be built up until we all reach unity in the faith and in the knowledge of the Son of God and become mature, attaining to the whole measure of the fullness of Christ’ (Eph. 4:12-13).”

For additional news before and during synod, subscribe to CRC News weekly email. A special link to synod news will go live before synod begins. Or follow the CRCNA on Facebook or on Twitter (#crcsynod).

Want to discuss the matters coming before Synod 2018? Join the conversation in the Synod section of The Network. During synod, you can follow a live stream of events at crcna.org/synod.