&lsquo;Learning to Count to One&rsquo; 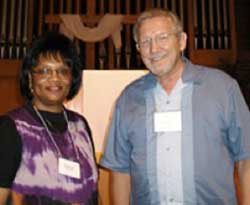 For more than 50 years, Rev. Al Mulder has been working with others to help change the face and character of the Christian Reformed Church and help it to become a more multiracial denomination.

Having grown up Dutch on a farm near Ireton, Iowa, Mulder did not really know any people of color as a youth. But he did decide, following his older brother’s death in a farm accident, that he wanted to be a minister. He has had people tell him that already at age 10 he spoke of serving as a minister.

The untimely and tragic death of his brother likely played a role in his hearing a call so early in life to the ministry. But the more specific call to missions, and ultimately to help in various ways to change the ethnic composition of his denomination, is linked to another early experience.

The summer after his brother’s death he attended a nearby vacation Bible school and was challenged by one of the teachers to commit his life to Christ and to missions.

“I was thinking that I would serve as a missionary in some far off place like Nigeria or India,” said Mulder, who was honored during a recent denominational luncheon for his 50 years of service to the CRC.

At Calvin College and then at Calvin Theological Seminary, he says, he still imagined serving abroad. However, being ordained at the age of 24, he was too young to serve as a CRC missionary and instead became pastor of a church in Kansas, a pastorate that he thoroughly enjoyed.

From there he was asked to get involved in mission work at a large boarding school for Navajo students in Utah.

“That is when I got my first real introduction to cross-cultural ministry, and I loved it,” he said. Even after 50 years, he still works part-time for the church.

He eventually became pastor of a CRC congregation in Gallup, New Mexico. During his time there, he helped it transition from a Navajo congregation to a multi-racial church, as well as got involved in supporting the nearby Rehoboth Christian School and in helping to form Classis Red Mesa, comprised primarily of Navajo congregations.

“I was in New Mexico during a time when there was an emphasis toward greater autonomy among people of color,” he said. “In New Mexico, it was a move away from missionary control and toward the Indian church and the Navajo people having a greater voice.”

He and his family were in New Mexico for 16 years, long enough for his children to consider that area their home. In 1984, he was then asked to come to Grand Rapids to serve on the staff of Christian Reformed Home Missions

In various capacities, he’s been with CRHM ever since, mostly working in the area of church planting. During his time as director of church planting, he saw the establishment of 250 or so churches, about half of which have a multiracial component.

“God has called his church to grow and the only way for that to happen is through change and to make space for others,” he said. “The whole move toward a more multicultural church, I continue to champion that.”

Mulder also helped to put together the 2006 book Learning to Count to One: The Joy and Pain of Becoming a Multiracial Church. The book contains stories of many different people who help to make up the Christian Reformed Church: Dutch immigrants in the United States and Canada, Native Americans and First Nations people; African Americans and Hispanics; people of Asian origin, and multiracial congregations.

In the book, he writes of his Dutch heritage, but also about how his life has become much more rich with cultural diversity. “Our home is decorated with southwestern art. Our gallery of grandchildren includes faces with Hispanic and Navajo features …The congregation I belong to is African American, Asian American, Hispanic and white. In God’s kind providence, I am learning to count to one.”

Learning to Count to One – that is, helping the church become more diverse as well as unified in its diversity -- is Mulder’s abiding mission as a minister.

“Alfred E. Mulder has devoted most of his ministry to understanding and celebrating the richness of cultural diversity among the people of God,” writes Rev. Peter Borgdorff, executive director emeritus of the CRC, in the foreword to the book.