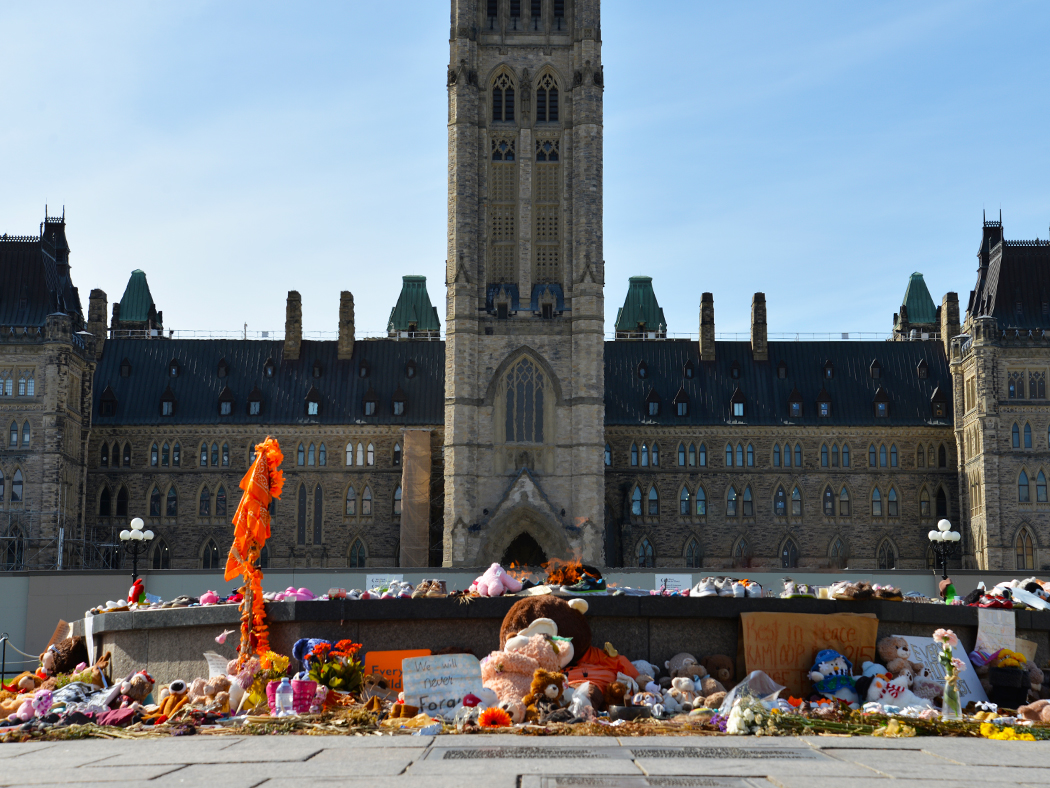 The discovery of unmarked graves at former residential schools for Indigenous children in Canada has recently been addressed in a short video from Indigenous Christian Fellowship (ICF) in Regina, Sask., and in peer-group conversations among several Christian Reformed pastors in the Toronto area.

These separate efforts dealt coincidentally with the deeply troubling reality of how Indigenous people, especially children in the residential schools, have been treated in Canada.

Here is a look at the two efforts, both of which are essentially about seeking understanding and unity among Christians.

While aiming to raise awareness and support for its front-lines neighborhood ministry in Regina, ICF makes clear in a six-minute video that its mission is about seeking reconciliation between Indigenous people and others — especially in light of the recent news about unmarked graves.

Cadmus Delorme, chief of the Cowessess First Nation, is featured on the ICF video. Standing outdoors amid graves on the site of the former Marieval Indian Residential School in Saskatchewan, he said that the months since the discovery of the graves have been difficult — and yet enlightening — for many people.

The unmarked graves story, he said, “has triggered and opened up conversations that have never happened before. For many Canadians, proud Canadians [in the past several months], I have learned that many have put down their shields and are admitting that they don’t know much about the true history of Indigenous people in Canada.”

These unmarked graves, said Delorme, must become a reason for people to have hard discussions. “As Indigenous philosophies taught us,” he said, “we must make sure we are . . . calm, cool, collective, and stern [as leaders] to educate” and get the truth across to people. “If people still don’t accept the truth, that is their issue. . . . But don’t allow the accidental racism or ignorance to continue, because there is one truth, and we must make sure that it prevails.”

Other aspects of the video highlight the work of ICF and how it offers a place for Indigenous people to gather for meals and fellowship.

There is also a brief appearance on the video by Beatrice Wolfe, author of a memoir titled Wolf Woman: A Search for Identity. “God put it in my heart to write my story because there are a lot of people out there who are lost and who can read this story and will relate to it as an Indigenous person.”

Here also is a link to the full video for the recent ICF gala celebration.

Funded by a Peer Learning Group Grant from the CRC’s Pastor Church Resources ministry since June, a dozen or so pastors have had thought-provoking conversations around issues of antiracism and white privilege in the church and society.

For starters, said Mark Broadus, pastor of Fellowship CRC in Toronto and coordinator of the peer group, they have used several books, including The Skin We’re In by Desmond Cole, Seven Fallen Feathersby Tanya Talaga, and Dear White Christians by Jennifer Harvey.

“Having read and discussed these books — all somehow pertaining to race, yet all from different angles — we delved deeply into the complexities that affect the lives of black, Indigenous, and white people and sought to pray and discuss the realities we are learning about,” said Broadus.

The peer group has met monthly on Zoom, and participants gathered for a weekend retreat at Friendship CRC in Toronto.

“I have learned that systemic racism in our society, including the church, is much more ingrained than I had thought,” said Bart Velthuizen, pastor of Grace CRC, Scarborough, Ont.

“As someone of privilege, and as a leader of an ethnically diverse church, I have become more aware of even unintentional systemic racism in how we do church. I have also learned that I need to honestly examine my own heart for any sinful residue of racism.”

Brenda Kronemeijer-Heyink, a CRC chaplain at the University of Toronto, said she joined the peer group to learn more about what racism looks like in Canada and to get to know the local pastors. Before coming to Canada, she served as a chaplain at Michigan State University.

“Through reading and discussing books with the group . . . I have learned a lot more about racism here in Toronto and Ontario,” she said.

“Because of this, I am more able to converse about antiracism with the students with whom I work, as well as to encourage them to lament the injustices and to act in ways that promote justice.”

Broadus added: “I enjoyed a discussion we had on the Belhar Confession, including the implication of the original debates on its status. We were reminded that ‘it’s not about us,’ but that we all need to repent of racist attitudes if we’re going to be agents of real, lasting change in our generation. There is an awareness of the risks involved in the process.”

An important issue of the group’s conversations, he said, was the ongoing struggle of people of color, especially in the Indigenous communities in Canada and how the Christian church can make a difference.

One of the things he has learned, he said in a report to Pastor Church Resources, is that change is needed “in response to generational trauma experienced by Indigenous communities.”

“I have thought anew about collective guilt on the part of Caucasian peoples and what is needed to see true reconciliation,” he said. “I have become more aware of racism within Canada and our complicated relationship with blacks, Indigenous people, and people of color.”

The group, he said, has discussed how racism is complex and embedded in society and culture and that “we need to work to disassemble these systems. The church has a role to play in this.”

Notably, as they heard the reports last summer about unmarked graves of Indigenous children being found at residential schools, the group hosted a prayer meeting on Canada Day on July 1 and invited others from Classis Toronto to participate.

“There was a question among us via email about how to celebrate Canada Day in light of the unmarked graves found recently on former residential school grounds. We wondered together how to highlight this in light of such a tragic history,” said Broadus.

“The conversation quickly turned into plans to gather for a time of prayer on the morning of Canada Day. The invite went beyond our group. It was a profound and beautiful way to start a complicated day. . . . This felt like a very appropriate action – one I am grateful for and will remember.”

Overall, added Broadus, he has learned through the peer group of the “great need to listen to as many voices as possible — especially the voices of people who have suffered racial trauma. We need to make room for all people to hear those voices.”

“I think that all of us are being challenged as we understand and grasp the effects of racism in our lives and community,” he said. “God is providing us the insight we need to talk about racism with our congregants and with others.”