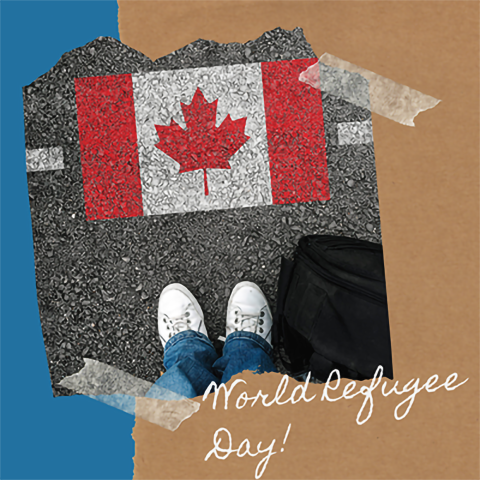 World Renew in Canada and the Centre for Public Dialogue have compiled resources, including a series of videos, that address how churches can pray, advocate, volunteer with/welcome, and donate to support refugees as we approach World Refugee Day this coming weekend.

But this year, because of the COVID-19 pandemic, they are doing things differently.

On the website featuring the resources, it says: “Most years, we share our World Refugee Day Toolkit . . . packed full of great resources and worship ideas to use in our churches. However, with most congregations moving to online services during the current pandemic, we wanted to share some adapted materials that your church can use in an online setting.”

In the CRC, World Renew welcomes and coordinates sponsorship of refugees in Canada, while Bethany Christian Services does that work for the CRC in the U.S.

Facilitated by Cindy Stover, a justice mobilizer for the CRC in Canada, the video series offers a look at the difficulties facing various types of refugees during this period of social isolation, including refugee claimants, sponsored refugees, and displaced persons overseas.

Representatives of Open Homes Hamilton, which works with local churches to open the homes of their congregants to refugees in Hamilton, Ont., said that prior to the pandemic, the number of refugee claimants arriving in Canada was significant. For instance, in past years, other local refugee shelters have had to turn away hundreds of people at a time, and Open Homes Hamilton was established in an attempt to serve some of these refugees who have few options for support.

But the number of claimants arriving has been severely restricted because the border has been closed during the pandemic, said Alison Witt, who works for the housing organization.

Currently, as World Refugee Day approaches, people who would like to seek refuge in Canada are not able to come, and must remain in other countries where they may be at risk. And those who are already in Canada are living in limbo, said Witt.

“All services are mostly shut down,” she said. Newly arrived refugee claimants in Canada are having a very tough time accessing important supports like legal, medical, and community services. “The whole refugee process,” said Witt, “has been put on hold. There are no new hearings. People are isolated and feel very alone with no end in sight.”

Adding to the challenges is the fact that many refugees are uniquely vulnerable as they are working — if they have been able to secure a job -- in high-risk occupations, noted Danielle Steenwyk-Rowaan, also with Open Homes Hamilton. They often work in jobs in long-term care facilities and meat-packing plants, providing valuable essential services — and that, she said, should give us more reason to welcome refugees as those who contribute to the betterment of our communities, even during this difficult time.

“We’re bombarded with a lot of messages right now that we should take care of ourselves first . . . but it’s pretty clear to me in Scripture [that we are called] to welcome the stranger, to offer hospitality, to love the foreigner the same as we love our citizens -- and that doesn’t change during COVID-19,” said Witt.

This is a time when the church can courageously and creatively, she added, live into its calling by opening up to the needs of others, especially refugees.

“This is also a time to think about the plight of people living under war, poverty, and sickness elsewhere in the world,” said Joseph Mutebi from World Renew, referring to people living in refugee camps overseas. “We are talking about lives at risk,” he said. “These are people who want to survive and have hope for the future.”

Dena Nicolai, who works in western Canada as a refugee advocate for the CRC, said refugee families fled places of trauma to find a safe and peaceful home. For now, that goal has been put on hold, so we must stand with them in whatever ways we are able.

“Think of how what is happening brings back, for many, feelings of uncertainty and instability. It brings back memories of a time when life was up in the air,” she said. “So much of what they were hoping for has been put on hold. They were already unsettled before all of this happened.”

Although it may be hard, Nicolai asks churches and church members, even as they look toward their own economic recovery, to consider doing whatever they can to make sure the same happens for the refugees among them.

Think about the courage it took, she said, for families to flee Europe after World War II to start new lives in Canada. Today’s refugees have needed the same level of courage, and perhaps even more, to face down obstacles.

“We need to advocate on behalf of refugees,” said Nicolai. We have access to local and provincial government leaders, and we can contact them to ask that Canada keeps its commitments to aid not only people who are still overseas but also those we have committed to welcome.

Anita Booy, a member Sonlight CRC in Regina, Sask., who supports the church’s refugee sponsorship team, noted that even as we are confined to our homes, our thoughts, hearts, and prayers can go out to the people we are honoring on World Refugee Day. We can use our imaginations to step inside the lives of people who come to Canada from far away places.

“Refugees leave so much behind — their homes, their families. Many come with nothing but the clothes they are wearing. They have faced tremendous disruptions in their lives.”

J.J. TenClay, who serves with the Reformed Church in America Global Missions, said she has observed a xenophobic attitude arising during the pandemic; some people are turning their frustrations on those who don’t deserve it. “We need to call out this attitude and name it for the sin it is” when we see it, she said. “We need to speak out for our foreign-born neighbors so that others know us as Christians.”

Also on the website are facts about refugees from World Renew:

“Persecution, war, and violence have forced more than 25.9 million refugees to flee their homes, over half of whom are children. The . . . refugee population continue[s] to remain at a record high. Here in Canada, we have welcomed newcomers through our Private Sponsorship of Refugees Program (PSRP) along with refugee claimants at our Canadian borders. It is a faithful response to our Christian calling to welcome the stranger and love our neighbours.

. . . Let us remember that behind each statistic is a person — a person faced with challenging life experiences and dreams for the future and hope for a better life.”

As part of the resources, there are prayers for churches to pray for refugees settling in Canada, for those waiting in camps overseas, and for those currently in transit.