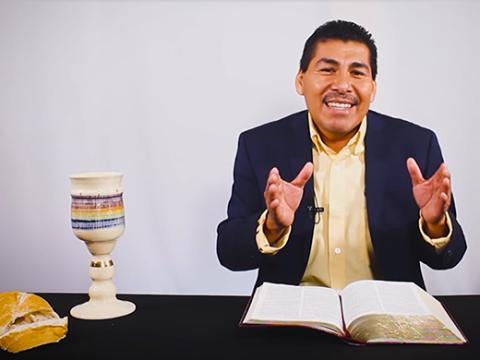 Online superheroes
Photo by Back to God Ministries International
June 17, 2020

As the number of new cases of COVID-19 in Mexico continue to rise, Rev. Huascar de la Cruz has experienced both highs and lows.

De la Cruz, who serves as the Spanish ministry leader of Back to God Ministries International, says he personally knows about 45 people who have died from the virus. That number includes relatives and fellow pastors from the Presbyterian Church in Mexico.

Most of de la Cruz’s contacts are in Tabasco state, which has been hit particularly hard by the virus. Although it is only the 20th largest state by population, Tabasco is fourth on the list of number of reported cases of COVID-19.

“As a pastor, it’s been hard to stay away from others in their times of need,” said de la Cruz. “We pastors were called to minister to people, especially in a crisis.”

When de la Cruz stepped into his new role with BTGMI last fall, he was excited about the opportunity to help churches in Mexico’s largest denomination become less resistant to using media in their worship services. Previous BTGMI Spanish ministry has been based mainly in the United States.

“I felt compelled to accept this position largely because of that resistance,” said de la Cruz. “But now, during COVID-19 churches see media as a necessity.”

De la Cruz has been helping churches to livestream their services online and hosting services of his own with help from volunteers and staff.

These efforts haven’t gone unnoticed.  As the government in Mexico’s Tabasco state — which is in the southeastern part of the country — sought ways to encourage people to stay at home, the state’s television station offered six denominations the opportunity to send a video that would air on one Sunday per month.

“Usually this channel wouldn’t include any religious content, but the hope was that these special broadcasts would keep people from traveling to churches that were open in less-affected states,” said de la Cruz. “We weren’t really ready for this level of broadcast, so it was sink or swim.”

De la Cruz and BTGMI’s Spanish ministry team wanted to make a video that would speak to people who may not identify as a Christian. They did this with several different segments including a skit with popular superheroes. That skit, with characters wearing masks, in particular seemed to be well-received.

“We have small kids and it is very difficult to keep them quiet and still,” shared one viewer. “They didn´t move when they watched the kids section and we hope you can do something similar in the future.”

De la Cruz asks for prayers for Mexico, as well as for Brazil, as both countries continue to see higher COVID-19-related death counts each day. Pray that this video, along with the other audio and video messages that de la Cruz is producing, will offer hope.