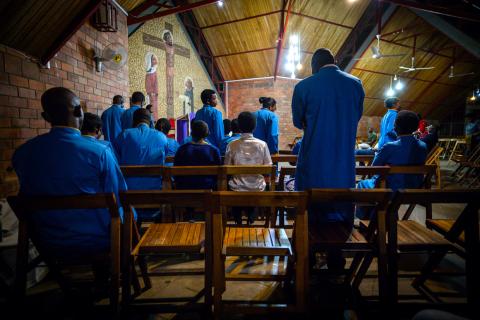 Image of people at worship in Africa
Photo by Templeton Religion Trust
June 17, 2020

As the new director of the Nagel Institute for the Study of World Christianity at Calvin University, Retief Müller will be carrying forward the institute’s research on the growth of Indigenous, on-the-ground Christianity and theology in Africa.

He will do this, in part, with the help of a Templeton Religion Trust grant of nearly $2.4 million that seeks to examine what is called “grounded theology” and to research how it plays out across Africa.

The administration of this grant is Müller’s first major responsibility as the new director of the institute. “I already know a lot of the people involved in this work and can slide into this smoothly,” he said.

“I’m hoping that this — grounded theology — will become the new way of doing theology in Africa,” a continent that has much to teach us about the evolution of Christianity, Müller added.

With more than 25 percent of its people identified as Christians, Africa has become the place where the church has been expanding most quickly — for various reasons — across the globe.

An article on the institute’s website explaining the emphasis of a Templeton research grant project that it launched in 2017 — and which is due to end soon — helps to describe this issue as well as the focus of the institute’s work:

“Africa often remains under-resourced and under-represented when it comes to global conversations pertaining to the advancement of world Christianity.

Following the directorship of Joel Carpenter, who retired last year, Müller will rely on his background, research and experience to lead the institute as it seeks to examine the growth of Christianity in Africa and helps to translate what that means for Christianity across the globe.

Müller knows firsthand about and has spent much of his career studying the practices, beliefs, and expansion of Christianity in Africa. In fact, his personal roots spread deep into the religious history of the continent.

The Dutch Reformed Church was one of the driving forces behind apartheid, the South African policy that formalized the separation of races.

As a young man, Müller didn’t really understand all of the ramifications and connections of the denomination to apartheid.

“The theology under which I was formed came from a colonial frame of mind. . . . I didn’t really know much about systemic injustice,” he said.

But as he grew older and then attended seminary and graduate school in the United States, he became more familiar with criticisms of the Dutch Reformed Church and learned about other theologies — many anti-apartheid — that helped to shape and define different religious belief systems and practices for him.

“I became more enlightened in the sense that my perspective was widened . . . and I became more enriched by the whole process of African theology,” he said.

In many ways, his work takes him back to the history of Christianity in his homeland in order to better understand where the country stands theologically today.

“I especially began to focus on the legacy of the missionary movement in South Africa,” he said. “Out of some of the missionary policies of the Dutch Reformed Church came the policy of apartheid. At the same time, opposition to the policy came out of this same movement.”

Along with Afe Adogame, a professor at Princeton Theological Seminary, Müller will use the three-year, nearly $2.4 million Templeton Religion Trust grant to fund a group of researchers who will examine grounded, contextual theology in a project titled “Engaging African Realities: Integrating Social Sciences within African Theology.”

Grounded theology is a type of research that looks at the context in which religious activities, thoughts, and practices take place. It is an inductive, rather than deductive, approach that begins by examining the data coming out of a situation and formulating theories from it. It is especially about the context in which it expresses itself.

“Among other things, it is really a new form of urban theology,” said Müller. “We will be looking at settings all across Africa — and the challenging problems that the people are confronting in those places.”

Before coming to the Nagel Institute, Müller was an associate professor of church history at Stellenbosch University in South Africa. He has a Ph.D. from Princeton Theological Seminary in mission, ecumenics, and history of religion (2008) and has written on various aspects of Christianity in southern and central Africa.

Müller “comes to the institute with a remarkable combination of scholarship and personal experience in the study of world Christianity,” said Joel Carpenter, who served as director of the Nagel Institute for 15 years and is now a senior research fellow at the institute.

Carpenter added that Müller “is connected with a number of pan-African scholarly networks for the study of Christianity and with the international Yale-Edinburgh Group, which focuses on the history of missions and world Christianity. He also taught for six years in South Korean Christian universities.

“As an ordained pastor in a Reformed denomination, Müller also brings strong prior commitments to Calvin University’s mission and confessional identity. And he brings a vision for how theology can be enriched by being grounded in the study of contemporary social trends.”

Beginning in January 2021, the new Templeton initiative on grounded theology will support several early-career African theologians and make 12 grants of not more than $50,000 USD available to each for their research, said Müller.

The awards will enable grantees to participate in three intensive workshops on social science theory, methods, and skills needed for grounded theology.

In some cases, said Müller, movements of grounded theology come out of the past with a fresh face; in other cases there is a new, compelling aspect to them.

Finding the meaning of how this happens and has happened in Africa is a large part of what Müller does as a researcher and academic — and what he is continuing to do at the Nagel Institute.

“I had known about Nagel and had learned about this position,” said Müller of the director’s job. “I applied and placed it in God’s hand, and, lo and behold, here I am.”