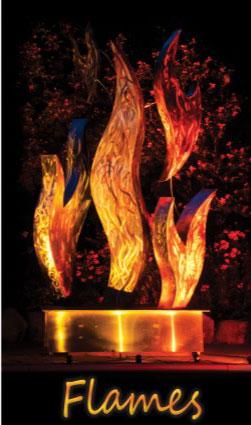 Originally, organizers of a regional prayer summit, set for Nov. 8-9 in Byron Center, Mich., did not plan for a sculpture of flames being a part of their event.

But then, they say, God led them in an unexpected direction.

They were already well along in making plans for summit, titled “Fanning the Flames: Rekindling our Heritage of Prayer," when someone mentioned the sculpture of flames, says Mary Sterenberg, one of the coordinators of the event.

It had been entered into Artprize, an annual art competition that was held in September in downtown Grand Rapids.

Wondering if the sculpture might tie in with the theme of their summit, Sterenberg decided to visit Artprize. She found the piece of art, serendipitously named “Flames” displayed in a pool of water outside of the Gerald R. Ford Museum.

"It was amazing. I immediately saw the connection,” says Sterenberg, who is regional prayer mobilizer for the Great Lakes region of Christian Reformed Home Missions.

Don Z, the artist and member of the CRC, was there. They spoke. He had no problem with “Flames” being used as a centerpiece for the summit. Besides his art work, Don Z works in construction as a welder.

When Sterenberg mentioned the artist’s response to others planning the summit, they decided to feature it on the stage of Corinth Reformed Church, site of the regional summit.

"I feel like God has been in this all along, going before us and showing the way. When we need something, God gives it to us,” said Sterenberg.

The prayer summit is being hosted by the CRC and the Reformed Church in America.

The event features a range of speakers, panels and times for prayer and worship.

The summit begins at 6:30 p.m. on Nov. 8 with a session titled "Rekindling our Heritage of Personal Prayer," presented by William C Brownson, a prolific author and an ordained Reformed Church in America minister.

Topics to be addressed include praying with community, healing prayer, personal prayer, praying in small groups, and prayers of forgiveness and blessing.

“This prayer summit is not just for pastors and prayer coordinators, but also for people in congregations,” says Sterenberg.

“We want to gather as the body of Christ. We want people to be  equipped and inspired so they can go out and mobilize prayer in their churches and spheres of influence.”