A Union Church Focusing on Millennials 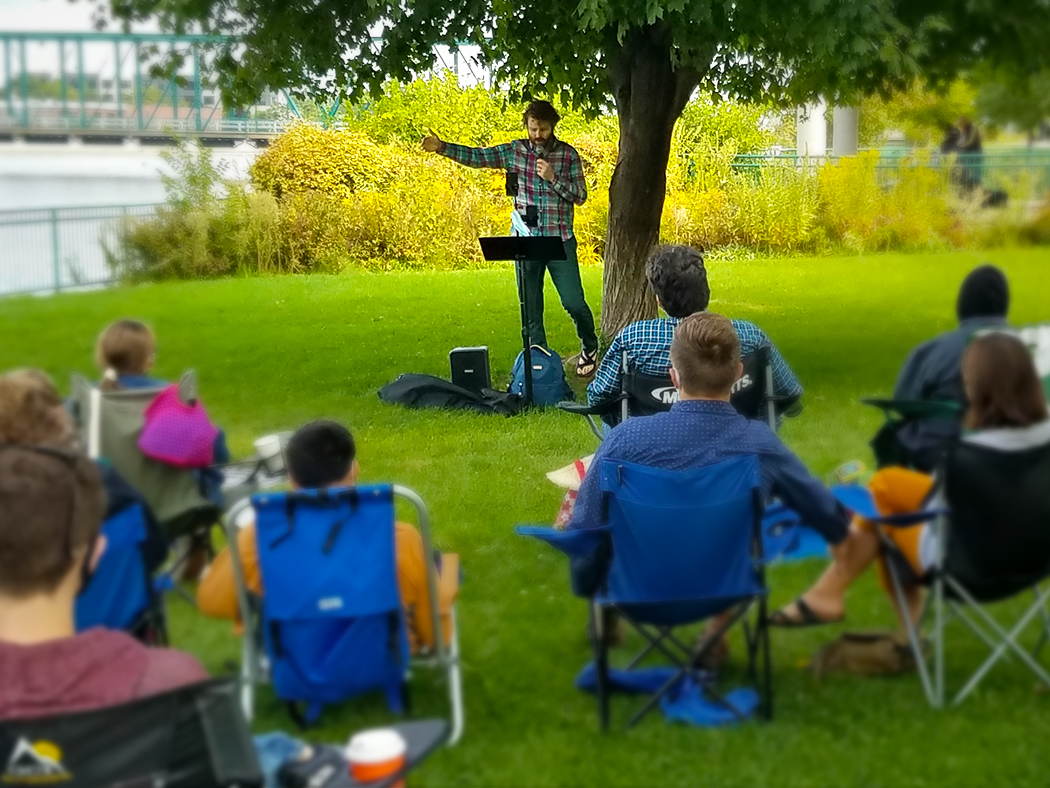 Wind gusted off the Grand River in downtown Grand Rapids, Mich., as Rev. Ron Radcliffe told the members of City Chapel, mostly millennials sitting on chairs in front of him and watching online, that one of the things he misses most since the start of the COVID-19 pandemic is being together.

When they were able to meet in person in a community space in a nearby hotel, worshipers took several minutes during each service to shake hands, hug one another, and talk. It was a welcome time for hospitality and fellowship.

“I miss passing the peace and how it helped bring us all together. Part of our worship is to show how we love one another,” said Radcliffe, the wind muffling some of his words.

City Chapel is a union church formed by the joint efforts of the Christian Reformed Church and the Reformed Church in America. It is a church plant supported by LaGrave Ave. CRC, Zion RCA, and Fifth RCA in the downtown Grand Rapids area. The three churches saw a need to reach people in their 20s and 30s living in and around downtown and decided to support a new church.

About 20 people, mostly millennials — that is, young people who became adults in the early 21st century — sat on chairs for the service in the park on that recent blustery Sunday morning. Rev. Anna Radcliffe, copastor of City Chapel with her husband, stood nearby under a tree caring for their newborn child.

City Chapel is currently meeting on Sundays at Sixth Street Park along the Grand River. It sits next to the historic, four-span, wrought-iron Sixth Street Bridge linking the east and west banks of Grand Rapids.

In an interview before the service, Ron Radcliffe said sermons at City Chapel are generally based out of whatever book of the Bible the church happens to be going through at the time. They let the text in the Bible guide a sermon and try to keep it simple, aware that they are teaching about God to some people who may not necessarily believe in God.

Since they were now going through Galatians, Ron Radcliffe spoke on Galatians 2:15-16, in which the apostle Paul highlights the importance of faith. It was a bottom-line sermon taking listeners back to the fundamentals of faith in Christ.

Paul wrote four letters to the Galatians, said Radcliffe, because “the people weren’t just believing in Christ. They believed there were rules and laws that needed to be followed. But it’s only Jesus and grace that accepts us into God’s family.”

In his letters to the Galatians, Paul was getting back to Christianity in its essence. He was reminding people, said Radcliffe, that “in Christ we receive a new identity that supersedes all other identities. It’s impossible for anyone to earn this.”

Christianity is all about being open to God’s leading; there are no set rules. The sermon for the people watching and listening that Sunday was geared for those with many questions about what they think is a complex religion filled with to-dos and not-to-dos, said Radcliffe.

The vision to begin this church began after Anna Radcliffe met Ron while they were attending Hope College in Holland, Mich. During that time they learned that they both had similar desires about building a community in some setting.

“When Ron and I were dating early on, we would drive by abandoned buildings and make up stories or ideas about how we might transform the space,” she said.

“I've also had a strong pull toward design and hospitality — I get it from my mom. I wouldn't say that Ron and I called what we wanted to do ‘church planting’ until more recently. It started with a dream of community — intentional and reflective of Christ in our city.”

After attending and graduating from Western Theological Seminary in Holland, Mich., she said, “We wanted to start a church for our college friends — and many of them had moved into downtown Grand Rapids. . . . We learned that a large percentage of Hope grads had moved to Grand Rapids and had eventually left the church.

“This pained both Ron and I — mostly that there wasn't a space that felt welcoming to these friends. . . . Primarily, these people are artists who are deeply mindful of the ways the organized church has failed to speak out openly against things like global warming and racism.”

Through a learning process with the RCA, the Radcliffes were able to understand that many millennials really struggle with trusting God, their narrative being something like, said Anna, "If I can't trust the church, then I can't trust God."

“What we realized” she added, “is that there is really only one solution toward transforming this narrative — lament. The church needed to repent of its failures if young people were ever going to be able to trust it and also God.”

As a result, lament has been an important part of their worship since City Chapel launched in Oct. 2018.

“Lamenting has been a way for people to name their pain both with theology and with their experiences within churches,” said Anna.

Anna Radcliffe works bivocationally as the coordinator of next-generation engagement for the RCA. Much of that work is enhanced by her being the pastor of a church, especially of young people.

Several of the people attending the service in the park that morning showed clearly that City Chapel was meeting their needs.

Connor Bolthouse and his wife, Bethany, knew the Radcliffes when they lived in Holland. But then the Bolthouses moved to Grand Rapids so that Bethany could take a job teaching school. When they learned that Ron and Anna had started a church in Grand Rapids, they checked it out and have been going ever since.

“This is a church devoted to being the face and feet of Jesus,” said Connor Bolthouse. “They fully speak the gospel in what they say and through their actions.”

Bethany Bolthouse said she appreciates the focus City Chapel puts on the arts. “This is a refreshing, authentic, and creative community,” she said.

Rachel and Sarah are millennial-age sisters who knew the Radcliffes in Holland. As they have done at other times, they decided on this Sunday to make the trip to Grand Rapids for the service.

“I think everyone here is going after God. It’s genuine,” said Rachel. “I miss not being here more often.”

While the church had for the most part attracted younger people, it has also drawn in some empty nesters who are living in the area.

“We were looking for a church after our kids moved out, and we heard about City Chapel,” said Jim Benison before the service. “We find that the younger people in this church bring higher energy, and it’s nice that we get a chance to speak into their lives.”

His wife, Julie, added, “This is a small community of people who care for one another and love Jesus.”