Military Chaplain Gives Back to U.S. 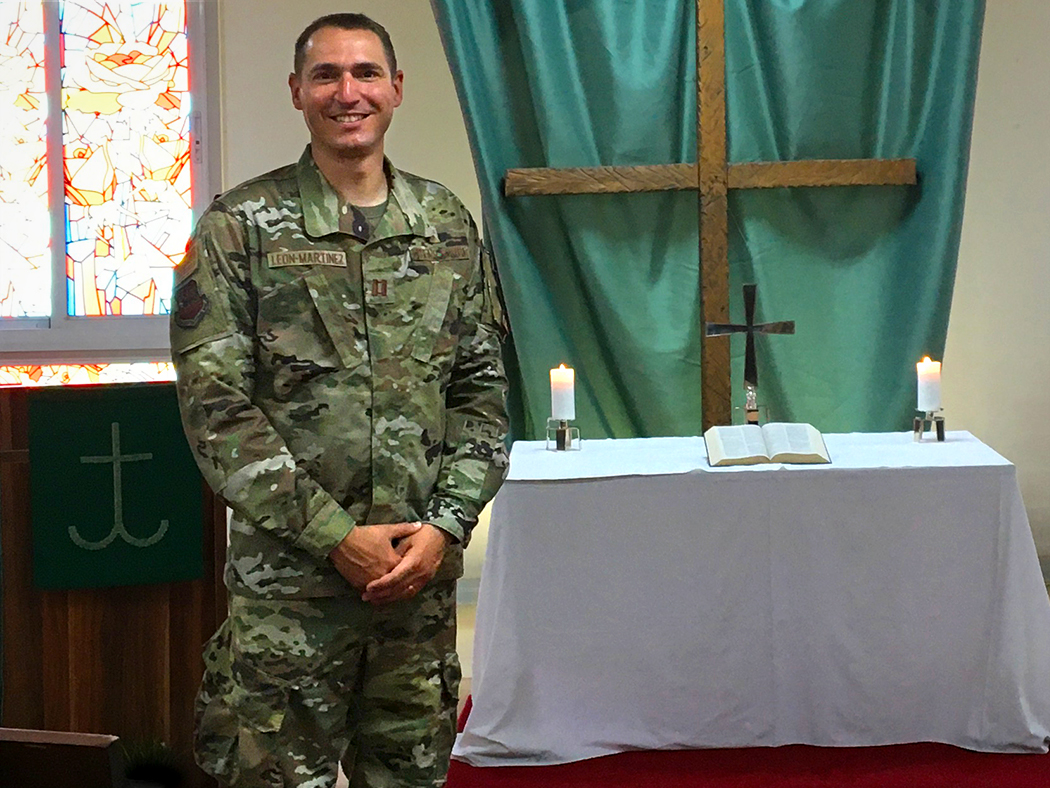 Given that his job includes being available at all hours to Air Force personnel, he always keeps his phone nearby. Usually the calls he receives are from someone on the base where he is stationed — but not this time.

“My role as a chaplain has given me the opportunity to build some genuine relationships,” he said. That night, even though he is deployed and away from his home station of Ellsworth Air Force Base in South Dakota, he was contacted by an Airman from Ellsworth who needed to talk.

Noting that the time difference from South Dakota to Southwest Asia is nine hours, Leon said, “The Airman who contacted me called at 02:30. He needed to speak with someone, and then 15 hours later I saw his post on Facebook of how he was struggling with suicidal ideation and that because he reached out and spoke with someone he was in a safe place.”

Leon had a similar call from another Airman recently and helped him through a hard time as well. Both of these instances illustrate the variety of his job as well as the opportunities he has to serve others who might be struggling.

“The main challenge I see as a young chaplain captain is the unpredictability of the work I do,” he said. “Every morning I plan my daily schedule to be productive and manage my time the best I can, but the minute I walk into the chapel door, everything gets tossed up in the air.”

This means, he added, “I have to be psychologically flexible to remain calm and still be as effective and efficient with however little autonomy I possess.”

Leon traces his interest in the military to being born and raised in Cuba, which he left when he was 19 years old.

“I always noticed the difference between the two countries when it came down to the military. One country is militarized and is run with militaristic techniques; the other is far from it, enjoying civil freedoms that I could only imagine possible.”

“So, along the way I mentioned to my wife that I would love serving the U.S in the military as a way to give back for the blessings I've enjoyed here,” he said.

After attending Kuyper College in Grand Rapids, Mich., Leon attended Calvin Theological Seminary, after which he served a church in Minnesota. He then trained to serve as a chaplain at a health care facility in Florida before deciding to join the military.

“As an immigrant, I had this sense of debt to the country. I thought that one tangible way to say ‘thank you’ was to serve in the military,” he said.

“I love God, and I love being a chaplain to all people. I guess I am paying the debt to the nation by doing something I enjoy and take pride in,” said Leon.

Currently he is deployed to an undisclosed location in the Southwest Asia region. This is his first deployment and, he said, it reminds him quite a bit of boarding schools he attended in Cuba, “with the exceptions of better food, better leaders, and a much better team of people to work with.”

Although he thoroughly enjoys being a chaplain, said Leon, there are challenges, such as having little time for contemplation and reflection.

“So, for instance,” he said, “I treasure the opportunities I have to pray with counselees and during special events because, quite frankly, some days those are the only prayers I get to pray.”

“I also miss having the time I enjoyed in the parish ministry to prepare for sermons,” he said. These days, whenever he preaches — and that has been almost every week for the past year and half — he can’t spend as much time as he would like to in preparation.

“Even so, as I prepare, I am being nurtured in my soul,” he said.

Looking back on his varied career so far, Leon said, “Everything I have been able to become at a personal and professional level is in great measure due to the opportunities afforded in the United States, opportunities I didn't have in Cuba, where I was born and raised.

“I feel indebted to the United States, and it is my moral obligation to pay it back to this great nation.”