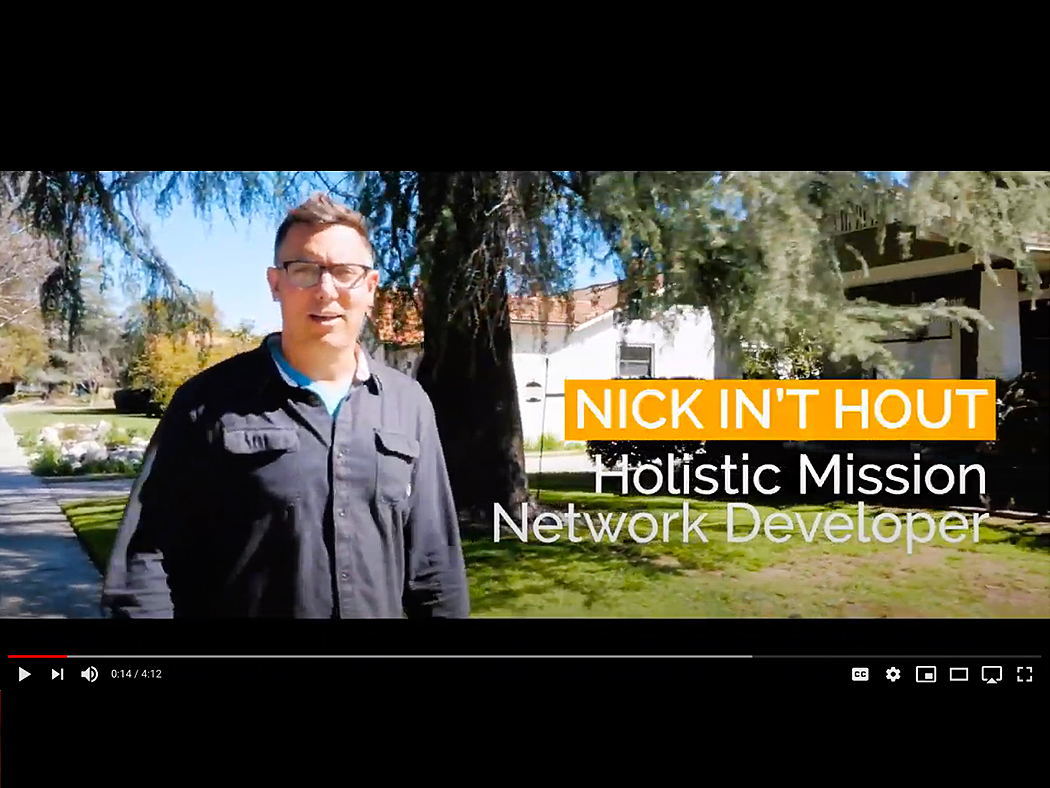 Nick In’t Hout was walking up and down the streets of Redlands, Calif. and praying about planting a church—but then he heard the Holy Spirit tell him that Redlands didn’t need another church. The city needed churches to work together.

“One of the things God impressed on me on that walk was just the number of churches up and down Church Street,” said In’t Hout. “I felt like the Lord was saying to me he didn’t need another church—but the invitation was to be part of his work connecting churches and bringing them together.”

In’t Hout serves as a holistic mission network developer with Resonate Global Mission. Forming networks is an important way Resonate fosters collaboration for the spread of the gospel throughout the world.

As In’t Hout first explored stepping into this role, a number of pastors in Redlands told him that these connections were desperately needed.

“I think we’ve learned over time one church cannot save a city. It’s going to take all of us, all of our churches. One church can’t do everything,” said Jackie Green, who serves as pastor of Second Baptist Church in Redlands alongside her husband, Anthony.

In’t Hout and the Greens are seeing how connections among church leaders are currently helping to peacefully address the protests and conversations about racism and police brutality that have recently erupted across the United States and around the world.

Years ago, the Greens organized a group of predominantly Black and Latino Christian leaders. When they met In’t Hout, they invited him to join, too. The group, called “Unity in the Community,” has met regularly with police in the city to discuss policing and how to continue building trust in neighborhoods.

After protests started in response to George Floyd’s death, the group gathered over video for a respectful discussion with police.

“It was a personal and powerful time of story, listening, and camaraderie among police and black and brown community leaders,” said In’t Hout, who was invited by Jackie Green to end the meeting in prayer.

“This conversation was possible because of the relational network that'd been formed over years. When crises came, we knew we could turn to and trust one another,” said In’t Hout.

This is just one example of how the Holy Spirit can work through connections formed by Resonate ministry leaders such as In’t Hout.

In’t Hout has seen people, churches, and other ministries in Redlands share gifts and resources. Churches and mission organizations have shared food with one another; a Christian ministry for single moms received a grant from a local church to train single moms in starting their own businesses; a Christian grocery store owner regularly supports churches and ministries.

In’t Hout is that hub in Redlands. He regularly witnesses that, when people come together, the Holy Spirit is able to work in powerful ways and do more than anyone ever imagined.

“I see my role in the city right now as a weaver, someone who is connecting the stories and the gifts from one community with the dreams and the needs of another community,” said In’t Hout. “As we connect, we discover possibility where there wasn’t before.”

If you would like to know more, visit Connecting Community.